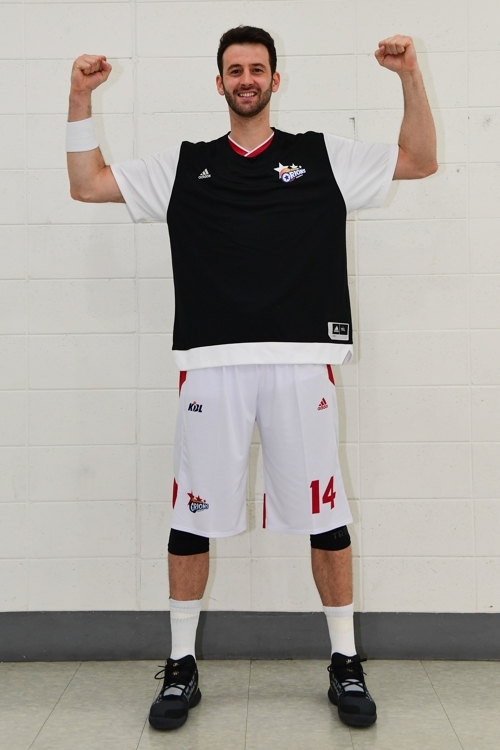 (Korean Basketball League)
A Serbian basketball player has decided to leave the South Korean league over fears of the fast-spreading novel coronavirus in the country, becoming the second foreign athlete in as many days to make the jump.

The Goyang Orion of the Korean Basketball League (KBL) said Thursday that their center Boris Savovic told them he'd like to leave South Korea to be with his pregnant wife.

He joins KT Sonicboom player Allen Durham in what could turn out to be an exodus of foreign athletes from South Korea. Durham informed his team on Wednesday that he no longer wants to be in the country.

To help curb the spread of the virus, the KBL said earlier this week that all remaining regular season games would be played behind closed doors.

Savovic and the Orion played their first crowdless game on Wednesday. After scoring 22 points in a 68-64 victory over Mobis Phoebus, Savovic acknowledged he was afraid of the virus.

Savovic, the first European to play in the KBL, joined the Orion in November, 11 games into the 54-game season. He is eighth in the league with 15.3 points per game and 12th overall with 5.9 rebounds per game.

Another KT player, Byron Mullens, has reportedly considered leaving, too.

KBL teams can each carry up to two foreign players. They account for huge chunks of teams' offense and rebounding -- eight of the top-10 scorers and top-10 rebounders are foreign-born players -- and their midseason departures could have major implications in playoff battles.

The regular season is scheduled to finish on March 31. (Yonhap)