According to the Korea Performing Arts Box Office Information System, managed by the Korea Arts Management Service affiliated with the Ministry of Culture, Sports and Tourism, performing arts theaters’ ticket sales from Feb. 1 to Tuesday recorded 18.4 billion won ($15.15), nearly down to half of the same period last month at 33 billion won. 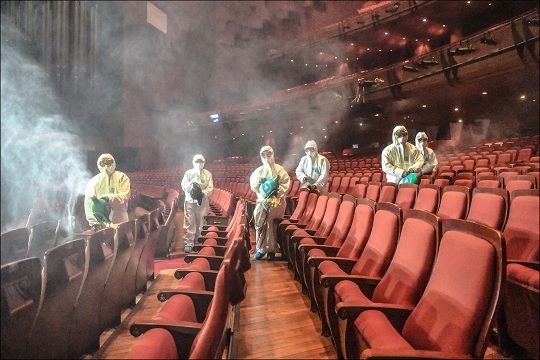 Workers wearing protective gear at Sejong Center disinfect the concert hall. (Sejong Center)
On Tuesday, the Culture Ministry announced it would close down all five national performance venues, including the National Theater of Korea, until March 8. Seven national art troupes have canceled performances.

The National Theater Company of Korea originally planned to present “Hwajeonga: Song of Spring Blossoms,” written by celebrated playwright Bae Sam-sik, at Myeongdong Theater from Friday to March 22, but the show has been canceled.

The Seoul Arts Center has canceled all of its in-house productions, closed exhibitions and other activities. In agreement with production companies, 14 performances and two exhibitions have been canceled for now. It said, however, as shows prepared by small production companies are unable to be canceled, it will deploy thermal-sensor cameras at the entrance and disinfect the art halls.

Seensee Company, a big name in the local showbiz scene, has decided to close its play “My Father, Me and Hongmae” at the Sejong Center earlier than scheduled. Though originally slated to continue until March 22, the play, featuring veteran actors Shin Gu and Son Suk, will close Saturday.

The company’s musical production “Mamma Mia” has postponed its opening to April 7. Licensed musical “Aida” has called off its first-and-last Busan performance at Dream Theater, due to the massive COVID-19 outbreak in the region. The company said all tickets are to be refunded without commission.

The year of 2020 was originally designated to be the year of drama. The theater scene had staggered in recent years due to the blacklist scandal and #MeToo movement. Hoping for major reform and a rebound, an association of playwrights announced this as the year of drama.

However, due to the massive virus outbreak, many shows have been canceled. The production companies, actors and related staff are to bear the brunt of the losses.