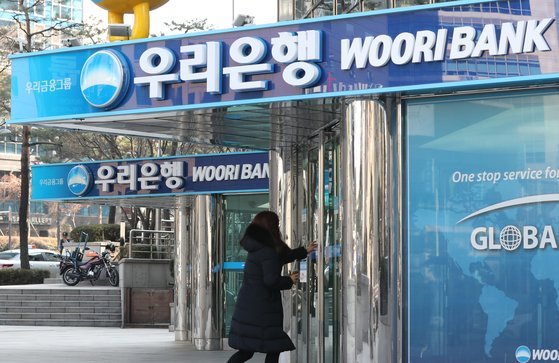 A Woori Bank branch in Seoul (Yonhap)
The nation’s financial watchdog plans to refer Woori Bank’s alleged information-theft case to the prosecution for investigation, according to internal documents acquired by a lawmaker Thursday.

The bank’s employees allegedly changed passwords of around 40,000 customers without permission to improve its balance sheet.

According to Financial Supervisory Service documents acquired by a lawmaker, the watchdog plans to send the case to “investigative authorities later on.” A detailed timeframe has not been mentioned, but the FSS is likely to forward it to its sanctions committee for review first “as early as next month.”

The watchdog has also reportedly decided to send the case to the Ministry of Interior and Safety as it could involve breach of the Personal Information Protection Act.

According to the documents, around 500 Woori Bank employees at 200 branches nationwide have been accused of changing passwords of around 40,000 customers without permission and reviving dormant accounts from January to August 2018. They are suspected of taking advantage of bank’s system, which counts such revived accounts as new customers, to shore up its financial performance.

The figures have nearly doubled from what Woori Bank initially revealed earlier this month -- it had disclosed that that 313 employees changed accounts of 23,000 customers.

At the time, Woori Bank was operating 870 brick-and-mortar branches nationwide, making more than 25 percent of them accountable for mishandling personal information.

The FSS launched a probe on the case in late 2018, after investigating the bank’s governance. Woori Bank also found the cases during its own internal investigation carried out in July. It is accused of sitting on the case until the FSS decided to launch a probe.