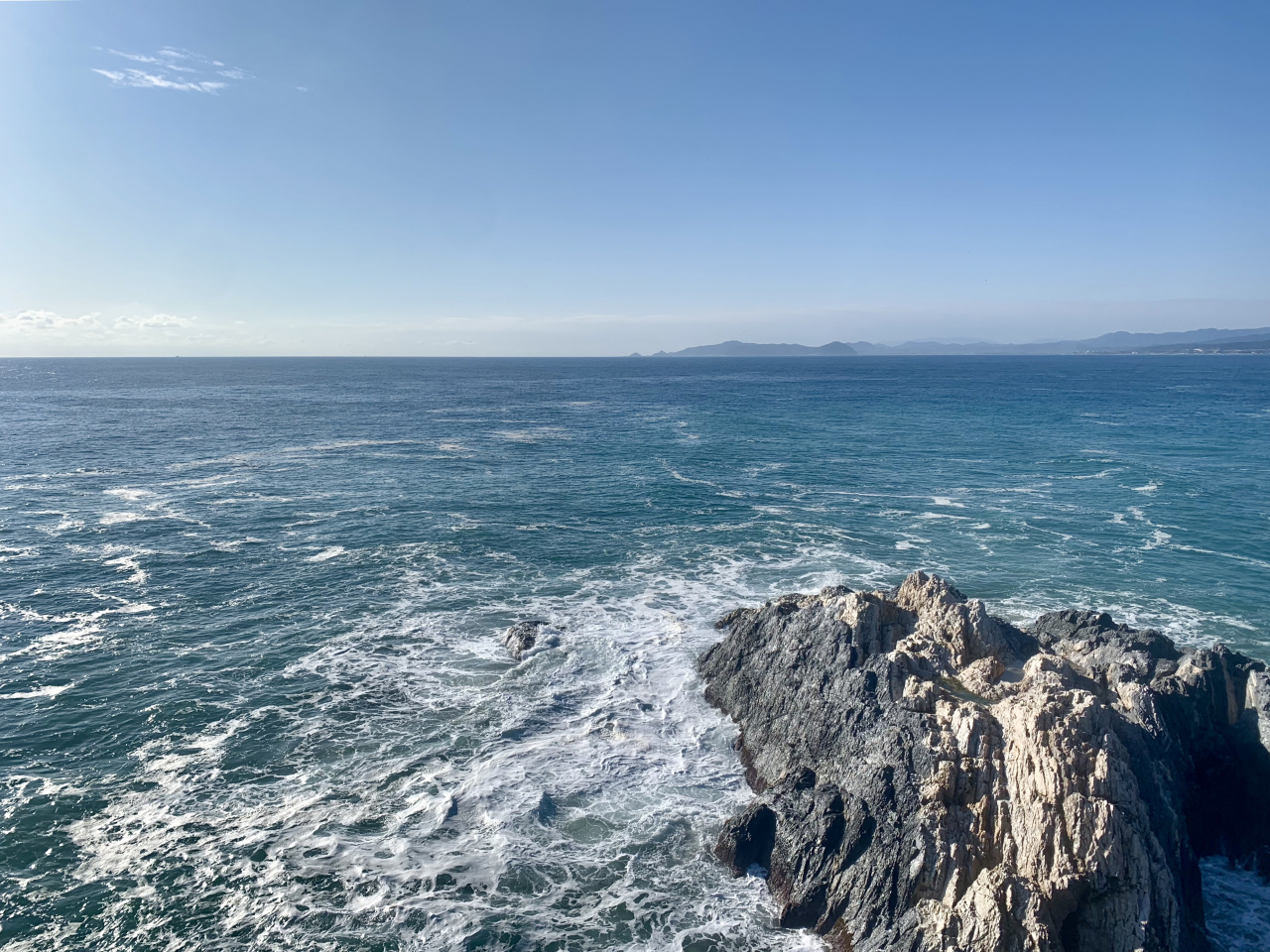 The view from the Hupo Deunggisan Skywalk (Im Eun-byel/The Korea Herald)
ULJIN, North Gyeongsang Province -- Though the east coast is a favorite summer destination for many, Uljin may not be foremost on the minds of holidaymakers.

A three-hour drive from Seoul, Uljin is a quiet harbor community that too often stands in the shadow of the popular tourist towns Gangneung and Sokcho.

Old shops and dockyards line the streets, giving Uljin a retro vibe. Though it may lack the sparkle of its better-known neighbors, Uljin -- with its hot springs and forests -- is a go-to spot for foodies planning a relaxing trip in the winter, when snow crabs are in season.

Uljin is home of snow crabs. 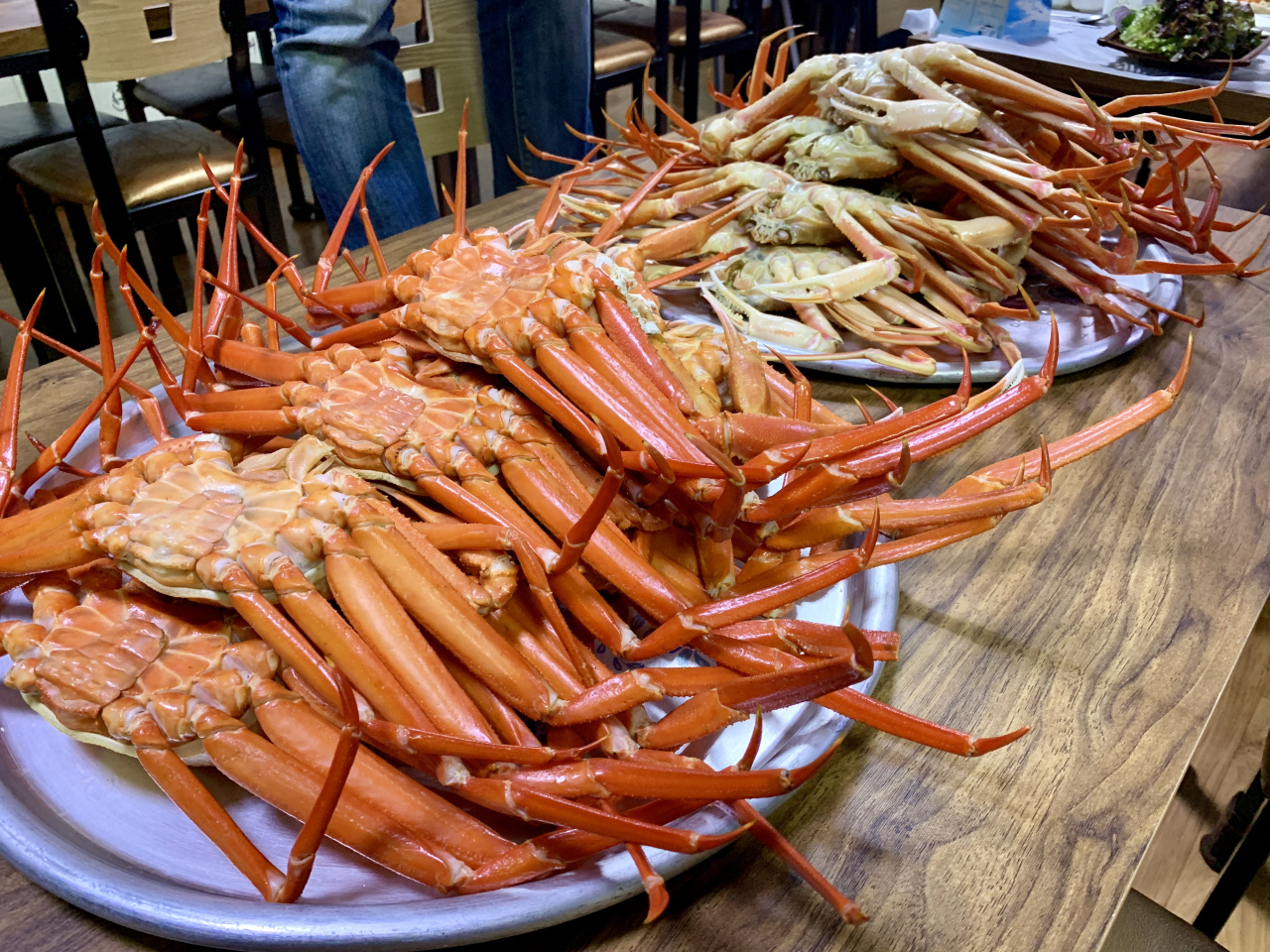 Red snow crabs (left) and snow crabs (Im Eun-byel/The Korea Herald)
Snow crabs, as the name suggests, are in season in winter. Caught along the east coast, the counties of Uljin and nearby Yeongdeok are famous for the crabs, and both towns host annual crab festivals.

In bygone days, snow crab was food for kings, appreciated for its soft texture and sweet flavor. Though the crabs are caught from November to May, February is the peak season.

The Wangdolcho area, a seabed 23 kilometers away from the harbor Hupohang, is a natural habitat for snow crabs. It is also home to more than 120 species of marine life.

Steamed for 10 to 15 minutes, the crabs’ long, lean legs are full of meat, and the body -- juicy with flavorful intestines -- can be mixed with rice for a dish that is considered a great delicacy here.

Red snow crab, named for its vivid color, is another large crab variety enjoyed here. It was once considered a cheaper substitute for snow crab, but has gotten pricier in recent years with more people enjoying its unique briny taste.

Unfortunately, this year’s annual Uljin snow crab festival, originally slated for late February, has been canceled due to the new coronavirus outbreak. Yeongdeok has postponed its crab festival till May. 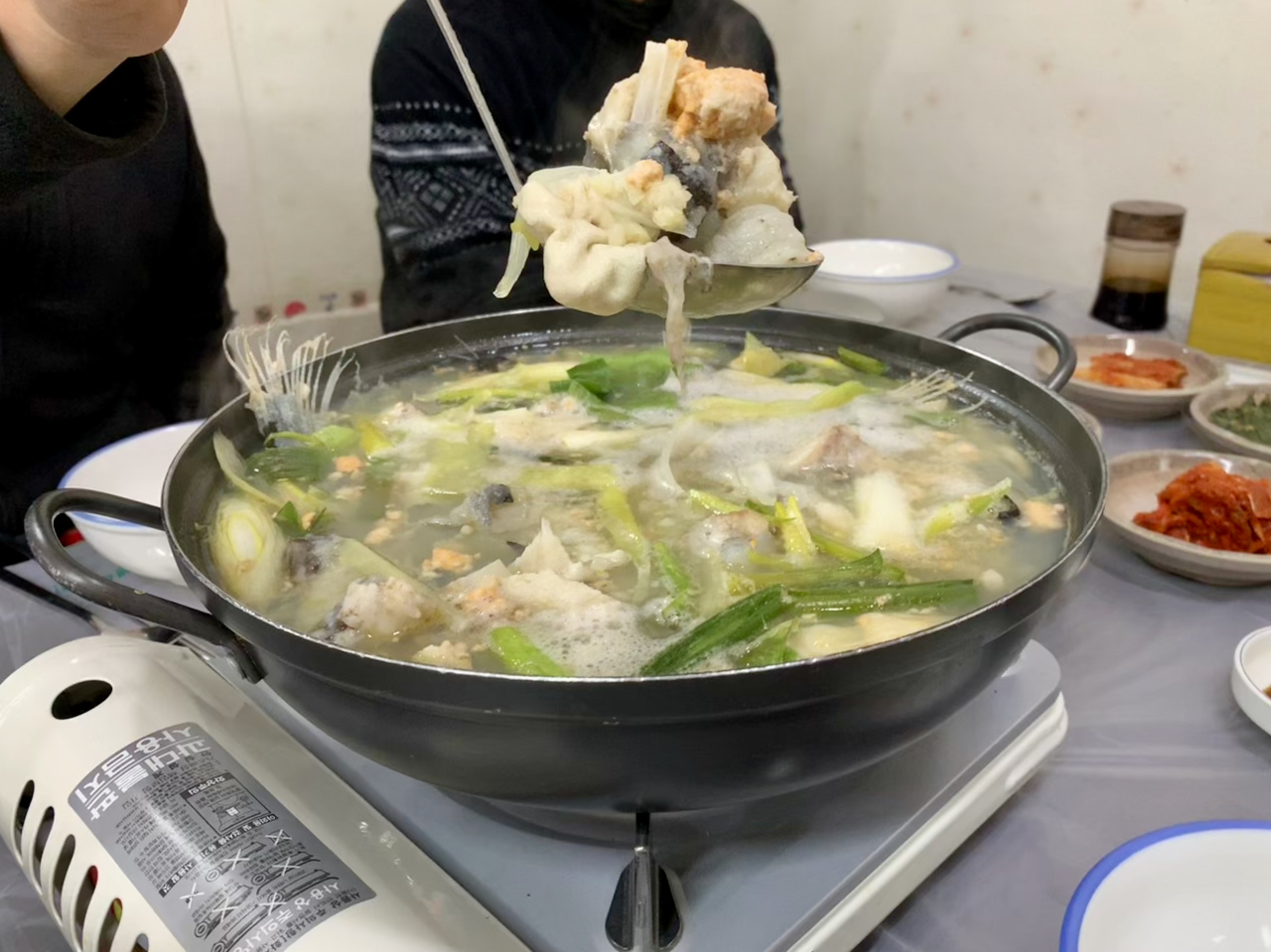 Another dish that may warm visitors up on a chilly day is monkfish soup. Monkfish is in season from December to February.

Though braised spicy monkfish is more widely enjoyed, the soup is highly appreciated among foodies as it can only be cooked with the freshest monkfish. The refreshing, energizing soup is said to be a great hangover cure too.

Though not a seasonal delicacy, seafood noodle soup can be a satisfying one-bowl meal. Cooked with clams, the broth is refreshing.

The water temperature at Baegam gets as high as 53 degrees Celsius. Containing various minerals and high in alkaline content, the water is said to alleviate various skin conditions.

The Deokgu Hot Spring is the only one in South Korea where the water naturally rises to the surface. The mineral-rich water gets hotter than 42 degrees Celsius, and is also widely believed to benefit various skin conditions.

After devouring the winter treats and enjoying a relaxing soak at one of the hot springs, visitors may also want to breathe in the refreshing sea air at the Hupo Deunggisan Skywalk. The 50-meter-high skywalk extends 135 meters out to the East Sea.

Visitors must wear plastic shoe covers, as some sections of the bridge are made of transparent glass. Standing on the skywalk, one can look directly into the deep blue ocean below. 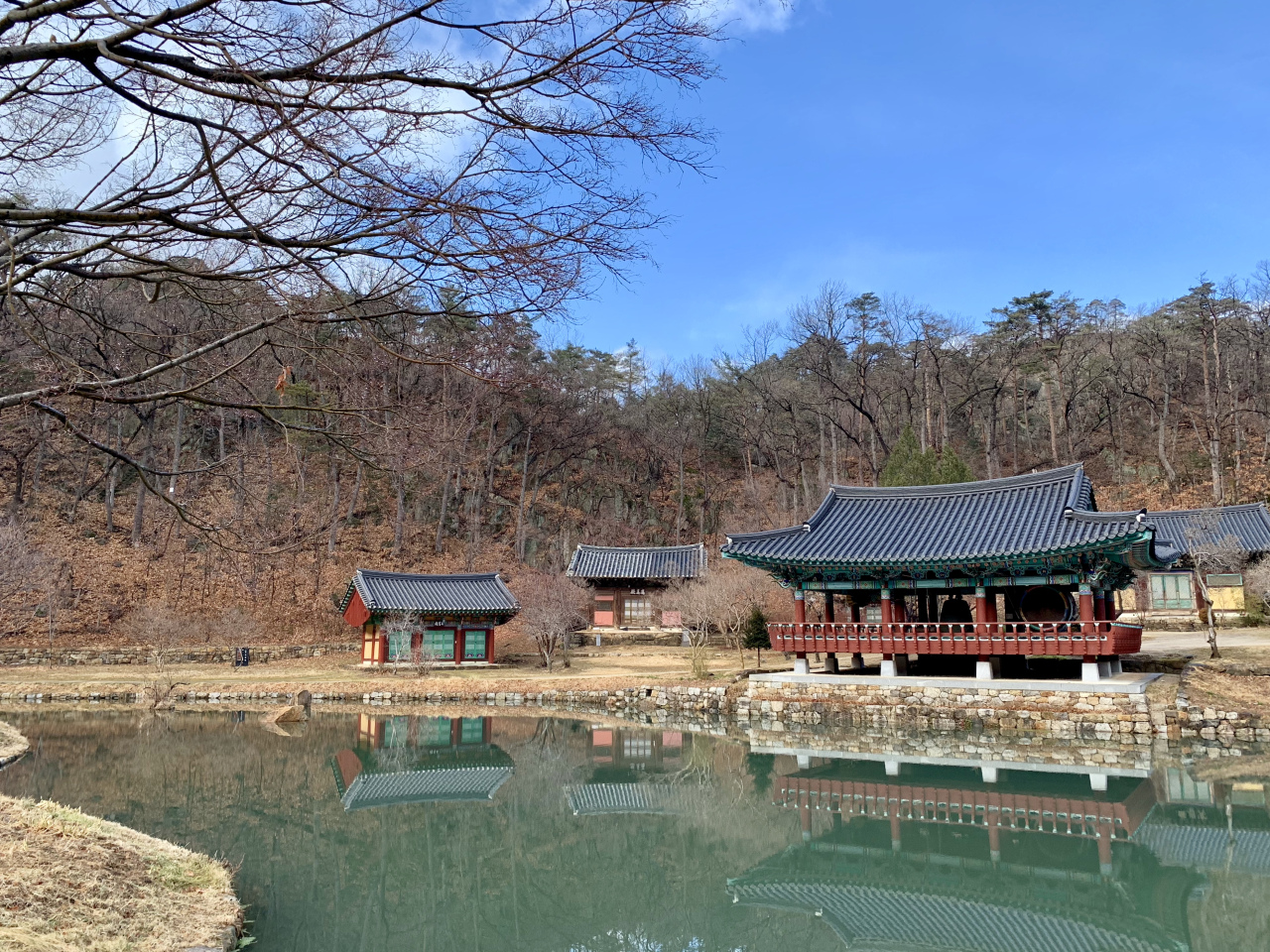 Buryeongsa on Cheonchuksan (In Eun-byel/The Korea Herald)
Those looking for a more serene experience might choose to visit Buryeongsa, a temple tucked away on the mountain Cheonchuksan.

A rock on the mountain that closely resembles the Buddha is reflected in the pond in front of the temple, whose name means “Buddha’s reflection.” 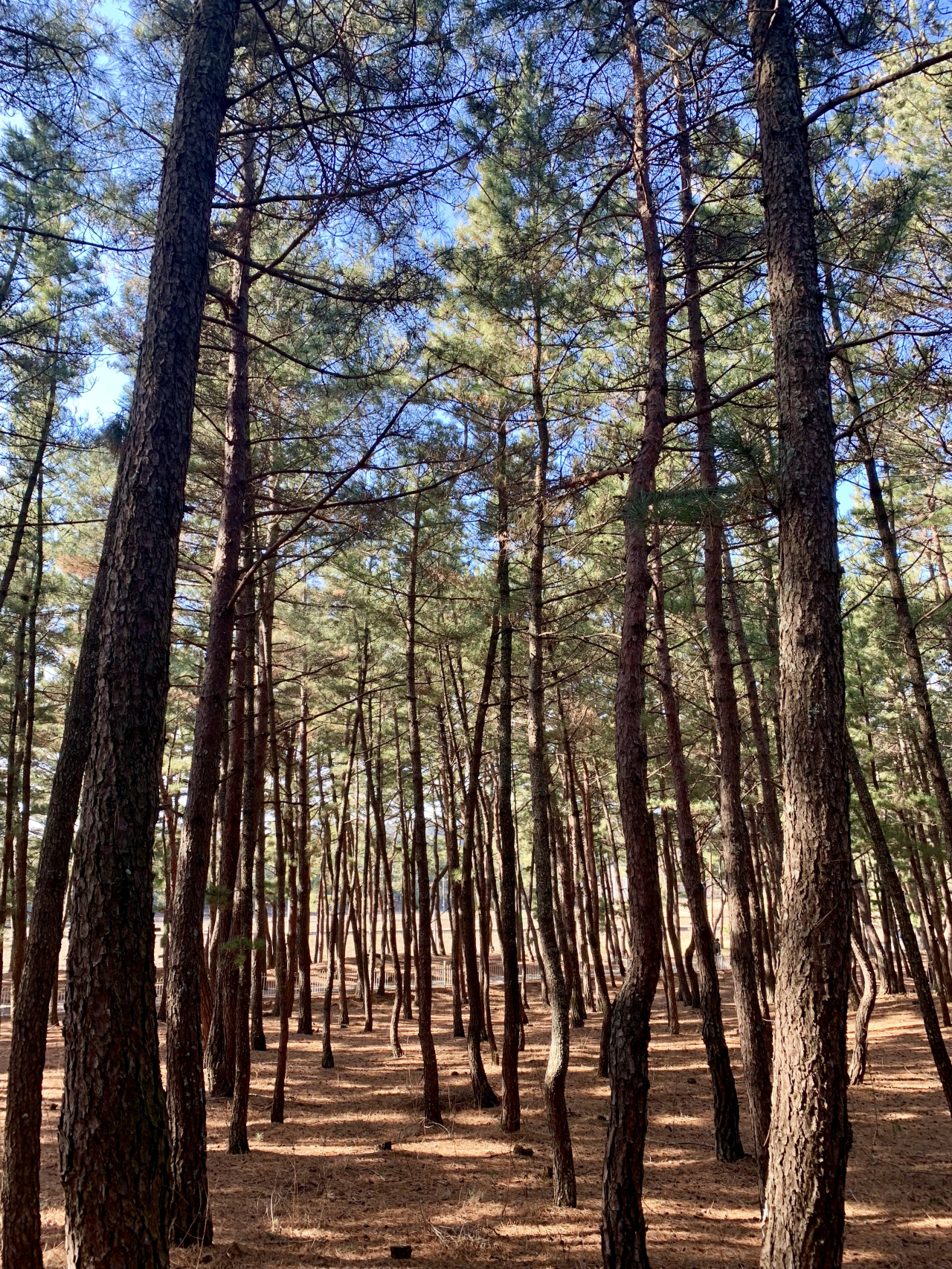 Wolsongjeong is surrounded by a pine forest. (Im Eun-byel/The Korea Herald)
Wolsongjeong is another spot to visit in the city. The pavilion itself -- a replica built in 1980, though the original dates back 1,000 years -- may not be much, but it is a natural sanctuary set in a pine tree forest and affords a panoramic view of the East Sea.