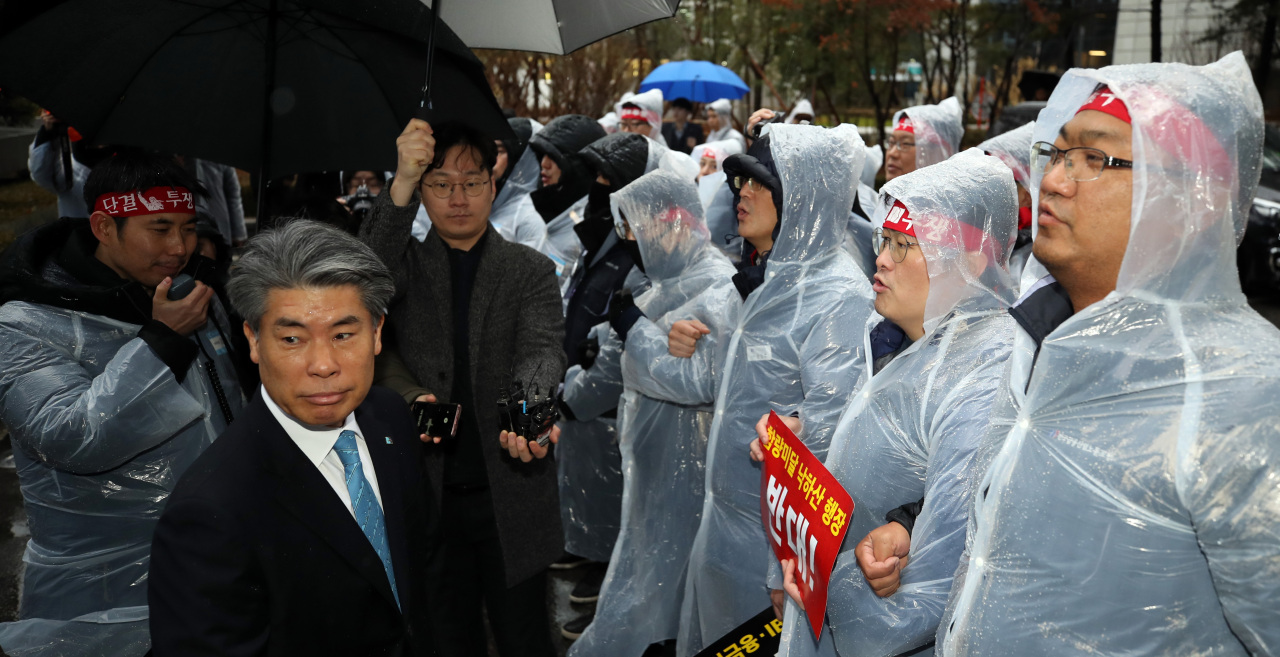 IBK unionists block CEO Yoon Jong-won from entering its headquarters located in central Seoul on Jan. 7. (Yonhap)
Protests outside the state-run Industrial Bank of Korea are expected to intensify, with the union’s fight against the top-down appointment of CEO Yoon Jong-won gaining support from powerful national labor associations in recent weeks.

The Federation of Korean Trade Unions, one of the two largest umbrella labor organizations here, announced Wednesday that it was joining the IBK unionists in protesting what they see as excessive government meddling in the organization’s personnel affairs.

The new leader of the FKTU, Kim Dong-myung, visited the IBK headquarters in central Seoul to announce the organization’s participation and vowed to continue until the workers’ demands were met. The FKTU had around 930,000 members as of the end of 2018, according to data published by the Ministry of Employment and Labor in December.

The Korean Confederation of Trade Unions, which has a membership of more than 960,000, announced it was joining the fight earlier this month.

Both labor organizations are expected to join in the protests after the Lunar New Year’s holidays, which fall Jan. 24-27 this year.

Yoon, a former senior presidential secretary for economic affairs, was unable to enter the bank’s headquarters for 21 consecutive days as of Thursday, with the IBK unionists standing in his way.

This marks the longest period that a CEO of a financial institution has been unable to enter his office. KB Kookmin Bank’s former CEO Lee Kun-ho was obstructed for 14 consecutive days upon his appointment in 2013. Lee, who was appointed in a similar top-down manner under the Park Geun-hye administration, also met with union resistance over government involvement.

IBK union members have consistently asked Cheong Wa Dae, the government and the ruling party to engage in dialogue, despite President Moon Jae-in’s insistence that the government has the authority to decide the state-run bank’s leadership.

Moon said during his New Year’s press conference at Cheong Wa Dae on Jan. 14 that the IBK “is a state-run bank backed by the government’s investment and a policy financial institution, which bestows (the administration) with personnel authority.”