[ The Korea Herald – Send E-mail ]
From glory of BTS, ‘Parasite’ to untimely deaths; highs and lows of 2019
By Yoon Min-sik
Published : Dec 30, 2019 - 16:49
Updated : Dec 30, 2019 - 17:14
January 2020 will decide if “Parasite” becomes the first South Korean film ever to win at the Golden Globe Awards. The next month, a run at the Oscars will wrap up an impressive series of wins for director Bong Joon-ho’s work, which bagged the Palme d’Or at the Cannes Film Festival earlier this year.

This year, Korean pop culture experienced highs like the Bong film taking the world by storm and depressing lows such as the untimely deaths of beloved celebrities. Here’s a look at some of the events that made the year shine, or dampened it.

BTS once again made a mark on the pop music world with its new album “Map of the Soul: Persona,” topping the Billboard 200 chart and becoming the first group since the Beatles to earn three top spots in less than a year. The band also topped the UK’s official albums chart with the album, becoming the first Korean act to do so.

Its hit track “Boy With Luv,” featuring Halsey, reached No. 8 on the Billboard Hot 100, the highest spot ever for a Korean artist.

BTS also won two prizes at the Billboard Music Awards and three at the American Music Awards, including favorite duo or group in the pop and rock categories. 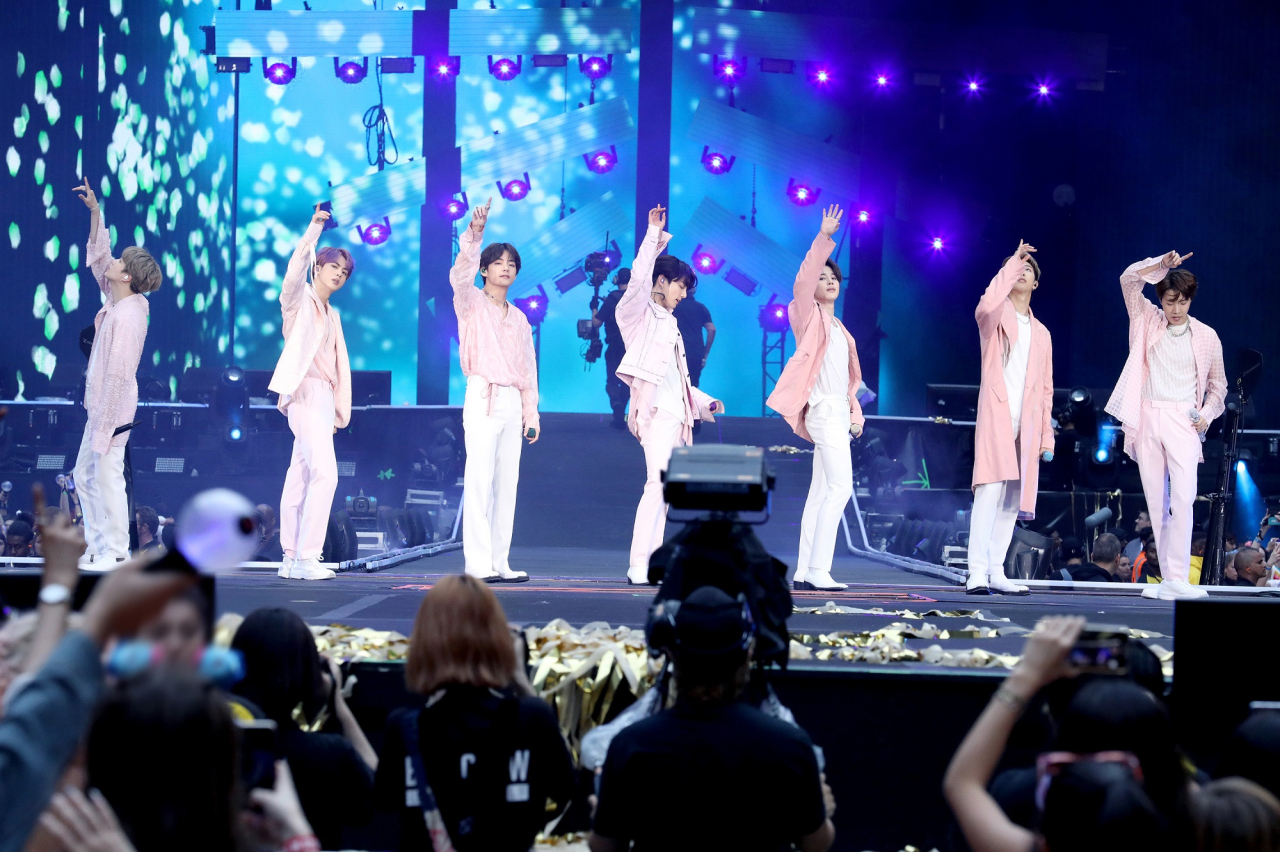 Not only was “Parasite” critically acclaimed, but it was also one of the most commercially successful films of the year, selling just over 10 million tickets. Success at the box office in Korea is usually measured by the number of tickets sold, not by overall revenue, and reaching the 10 million mark would be a massive success in any year.

This year, however, the standards are a little higher as four other films surpassed the 10 million mark: “Extreme Job” became the second-bestselling film of all time with 16.2 million tickets sold, followed by “Avengers: Endgame” with 13.9 million, “Frozen 2” with 13.1 million and “Aladdin” with 12.5 million.

It was a massively successful year for CJ ENM, which distributed both Korean films on the list and also “Exit,” which sits at No. 6 with 9.4 million.

The combined success of entertainment giants like CJ and Walt Disney Company -- which distributed “Endgame” and “Frozen 2” here -- sparked controversy about big-budget films “monopolizing” the screens here. A little-known civic group even filed a complaint with the prosecution, accusing Disney of violating the country’s anti-monopoly law. Furthermore, “Endgame” was shown on the greatest number of screens in the history of Korean cinema.

Even Korean Culture Minister Park Yang-woo addressed this issue, saying earlier in the year that the government was mulling steps to prevent blockbusters from monopolizing the screens, which could include screen quotas to protect low-budget and independent films.

A bill proposed by Rep. Woo Sang-ho of the ruling Democratic Party of Korea is pending at the National Assembly right now, which states that the percentage of screens allotted to any specific film at any multiplex theater cannot surpass 50 percent during prime cinema hours.

It is not just the big films that received honors. Director Kim Bo-ri’s “House of Hummingbird” became the indie film of the year, showing the dark side of Korean society through the story of a teenage girl in the ’90s.

Despite being a low-budget film, it sold 140,000 tickets and collected dozens of trophies at film festivals in and out of Korea.

While not as highly praised as “Hummingbird,” actor Kim Yoon-seok’s directorial debut, “Another Child,” was deemed successful as the film received positive reviews.

But it was not all glory for the pop culture scene. The K-pop scene kicked off this year with a rather embarrassing scandal concerning the club Burning Sun, which had former Big Bang member Seungri as a major player. The scandal snowballed to include allegations of using drugs and arranging prostitution, even forcing YG Entertainment chief Yang Hyun-suk to undergo investigation.

Neither Yang nor Seungri was charged in connection with the prostitution scandal, but they are currently facing other charges such as gambling.

Burning Sun, however, revealed that a group of celebrities had shared a sex video that one of them -- singer Jung Joon-young -- had filmed without the woman’s consent. Jung and Choi Jong-hoon -- formerly of FT Island -- were also accused of what is legally defined as “quasi-rape.” This refers to a sexual act committed against a person who is incapable of giving consent -- for example, someone who is drunk or fast asleep.

In November, the court sentenced Jung to six years in prison and Choi to five, with only Jung being charged with illegally filming the video.

The other celebrities who took part in the group chat room were disgraced as well.

K-pop fans got another shock when an extensive investigation by the prosecution found that voting had been rigged in all four seasons of the popular Mnet series “Produce,” run by CJ ENM. The officials concerned, including the producers of the program, have been indicted.

Tragedy struck in October when singer-turned-actor Sulli, formerly of K-pop group f(x), was found dead in an apparent suicide. While no suicide note was found, there is widespread suspicion that she killed herself due to stress from malicious online comments targeting her.

The next month, Sulli’s close friend and fellow K-pop star Goo Hara was also found dead in what is believed to be another suicide. Goo, like Sulli, was often the victim of malicious comments, particularly following a public quarrel with an ex-boyfriend that reportedly involved physical violence.

Despite the gloomy news that struck the K-pop scene near year-end, the fans got some comfort when a ’90s talent was resurrected from obscurity. Yang Joon-il, a K-pop singer who never rose to stardom, gained belated popularity after being rediscovered as part of a “retro trend” on YouTube. He has since appeared on TV and is slated to hold his first-ever fan meeting Tuesday.