The latest and final entry in the famed franchise, “Star Wars: The Rise of Skywalker,” was as multifaceted as my reaction to the film. It had an ample amount of kick-ass moments, but ultimately came up short in satiating what amounted to comically bloated expectations from the fans.

Rey (Daisy Ridley) continues her training under Leia Organa -- Carrie Fisher -- but is distracted by Ren’s ongoing attempts to bring her to the Dark Side.

Then it emerges that an evil force that once threatened the entire galaxy has returned and joined forces with Kylo Ren -- Adam Driver. So Finn and Poe Dameron -- John Boyega and Oscar Isaac -- join Rey to find this formidable armada in an attempt to save the galaxy. 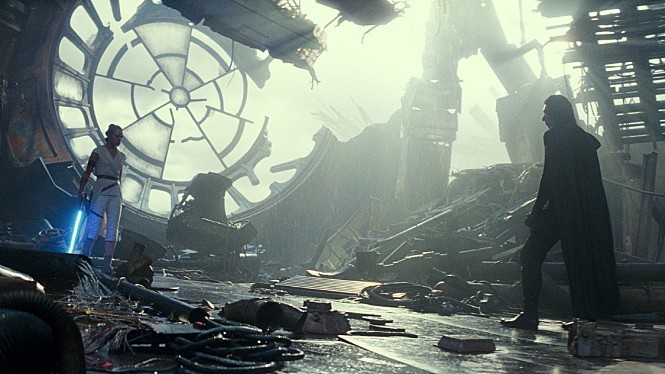 I’m not going to point out the numerous plot holes in this flick because other “Star Wars” movies had plenty as well, with the possible exception of “The Empire Strikes Back.”

Let’s first count down the good stuff. It has legitimate “Hell, yeah!” moments, especially if you are a fan of the series.

The effects used in the original trilogy were amazing for their time, but technological advancement has since allowed for some truly epic and spectacular space battles. The acting was decent all around, and the film was visually impressive. The wistfully nostalgic moments were very nice; seeing Lando Calrissian back was awesome, just as seeing him back on the Millennium Falcon was.

I liked how Ren’s character development was finalized in the last film, with the line “I know what I have to do but I don’t know if I have the strength to do it” being used to reflect his growth.

But even the subpar “Star Wars” films have some ups. The lightsaber battles in the “Star Wars: Episode I - The Phantom Menace” were amazing, and “Rogue One” had hands-down the best Darth Vader scene ever, if not the best “Star Wars” scene ever.

Out of all three films in the sequel trilogy, it was the one that felt most like a “Star Wars” film. Which I thought meant that the series was suddenly backpedaling.

As much hate as “Star Wars: The Last Jedi” got for disregarding much of the lore and many of its key characters, the film at least had something new going on. It was starting to tell a new story about how The Force -- a magical power wielded by the Jedi and a handful of gifted individuals -- can actually be used by anyone and special lineage matters not, but one’s choice does.

That goes nowhere in the final film, which regresses to the old formula of a battle of space wizards. I have a feeling that the box office score of “The Last Jedi” dipping to $1.3 billion from $2 billion for “Star Wars: The Force Awakens” played a role. They decided to cater more to the old fans, who thought the way the creators treated Luke Skywalker and Jedi like old obsolete relics was an insult.

This is demonstrated in the role of Rose Tico (Kelly Marie Tan) being reduced to near zero in the new film, as she was the one who got the most complaints about Disney’s new approach to “Star Wars.”

This is all good, but it results in the sequel series having basically no unified narrative, instead being a cheap knockoff -- or rather a very pricey one -- of the original series. This film took such a drastic turn from the last one that I feel like “The Last Jedi” and “The Rise of Skywalker” each are part of different trilogies that exist in alternate universes. The way the second film ended, Tico should have been a major character in the third one.

Another thing I noticed is that the film felt ... too Disney.

Now, I won’t pretend that the original series, while great and still pulling at so many heartstrings, was perfect. It had corny dialogue, hammy moments and forced plot points.

But the original series had a swagger and its unique charm. It had the guts to make a hardened criminal one of its leads, to make a “good guy” shoot first (YES, HE SHOT FIRST), to make a guy hearing the words “I love you” reply with “I know.” Yes, I realize all of this is Han Solo, but that’s how good that character was.

Because of Han’s charm, the character of Luke -- who might otherwise have been a cookie-cutter good guy -- was more likable in comparison. And Leia was a great character as well, emboldened, tough and always in command. She was more of a warrior than a princess, before “Return of the Jedi” decided to go rogue.

But all the characters in the new series are just good guys, and the humor is too Disney as well. I cringed at the “I am all Jedi” line, and what’s with the romance that had absolutely no buildup?

Which of the three characters in the new trilogy has the charm to match Leia’s or Han’s? Rey is a strong, independent character but that’s nothing new by 2019 standards. In fact, with all the political correctness in films lately, Rey -- at least in the realm of the movies -- is as standard as Luke was back in the 70s.

In my opinion, the success of the original series was built around “The Empire Strikes Back.” The first film was a massive hit, but I don’t think the series would have been a film classic by itself. “The Empire” took risks to boldly tell the dark tale and had a twist that resonated in cinematic history, adding drama to what had previously been a fun action film. The stakes were raised, and the payoff was more cathartic in the final film.

The new series blew that opportunity in “The Last Jedi.” It actually could have developed Rey’s character the way it did with Luke, using the content in the last film, but it decided to scrap it and go for the money. As a result, the shocking reveal in the second film went nowhere.

The lack of drama directly correlates with how the final showdown feels. Even though “Return of the Jedi” was no masterpiece, it built on the relationship between Darth Vader and Luke that weighed heavily throughout the film. No such drama is seen here, at least not on the level of the original.

Is the film a bad one? No, far from it. It gave us a great spectacle. I loved when an X-wing fighter jet was raised with The Force, paying homage to a famous scene from “The Empire.” My heart pumped in the climax during a “certain scene” when the original “Star Wars” music came on. It was a pretty good action film.

But “Star Wars” was more than that. It intrigued us with the characters and their stories, and left us yearning for more. It was a modern-day myth, a cultural phenomenon, and Darth Vader was among the icons who defined a generation.

That is why its following kept growing for decades, and its lore kept on expanding with each game, novel and even TV special. That’s why so many people tuned in to see the story of how Darth Vader became the galaxy’s most menacing force.

Will people camp out to see a new film about Kylo Ren turning to the Dark Side? Or how the events transpire after this? Maybe, but not to the degree that they once did.

This film is not bad. It is worth checking out just for the cool action sequences and lightsaber battles.

It is well on its way to becoming a massive box office hit, although I doubt anywhere near “The Force Awakens.” But I do not think it built up nearly enough expectations for the new series, if there ever is one.

What we got was a decent film, but not one to carry the torch of the “Star Wars” legacy.

The film will open in theaters here Jan. 8.