These words echo through the story of King Sejong of Joseon and his trusted inventor Jang Yeong-sil, who aspired to that which was beyond the realm of their reality, and believed in their dreams despite what the world said.

Director Hur Jin-ho’s “Forbidden Dream” is a period piece about the two great men and the bond that formed between them as they worked toward their shared vision, in a supremely acted film with great characters and a solid story.

The film takes the viewers to the Joseon Kingdom under the rule of Sejong the Great (Han Suk-kyu), who had an appetite for innovation and a tendency to think outside the box. At this point Joseon, though it was a sovereign state, had accepted the authority of the Chinese emperor and was under the empire’s immense influence. The study of astronomy was forbidden to Koreans because the sky was considered sacred.

The king makes a controversial move by appointing former slave Jang Yeong-sil (Choi Min-sik) as his science officer out of high regard for Jang’s creative thinking. Jang goes on to invent several devices that contribute to technological advances, and King Sejong gradually befriends the only man who seems to share his vision of making life better for the common people. But Jang’s study of the skies and his subsequent invention of the celestial globe -- which could only incur the wrath of the Chinese emperor -- pushes the king to the point where he can no longer protect Jang or his ingenious devices. 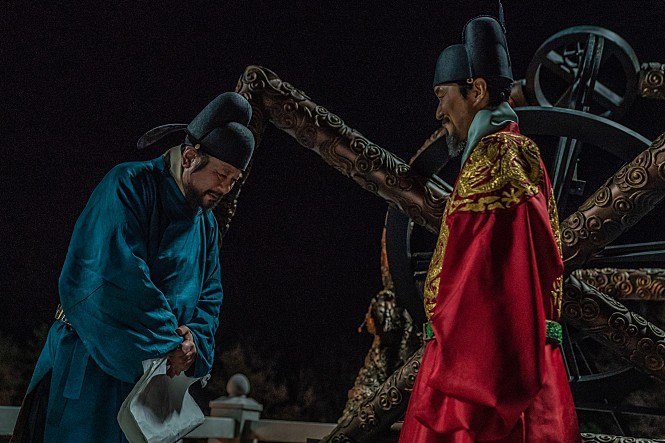 “Forbidden Dream” (Lotte Entertainment)
First, let’s gloss over some of the historical liberties the film takes; after all, it is a historical drama, not a historical documentary. There was some controversy over a scene in the trailer where science enthusiast King Sejong burns the celestial globe, but it actually makes sense in the actual film and is one of its more emotional moments. Overall, the creative license employed in the film never infringes upon the essence of the true story it tells or the real people it depicts.

These people are the strongest points of the film. Choi and Han are two of the best thespians in South Korea, but it is not just their acting skills that stand out. The chemistry they share as two men with a common vision is outstanding.

It is difficult to discuss the characteristics of Jang and King Sejong separately because they are intertwined: Their development, inner conflicts, emotions, and even the crises they face are synchronized. This method of storytelling carries the risk of coming off as lazy writing if done wrong, but with the great chemistry between the two leads and good writing, it leads the audience to become even more invested in their story.

I loved that the film depicted Sejong in a relatable way without diminishing his greatness. He is wise and kind, yet he is ambitious and has a temper sometimes.

Also, the film creates a believable bond between the two. They like each other not for each other’s genius, but because they connect on a personal level. Their relationship grows within the conversation they share under the stars, in what I believe is the highlight of the film, where they reveal their dreams under the astonishing night skies.

I also liked that they didn’t make the main antagonist just evil. The film does have some cookie-cutter bad guys as the secondary villains, but the biggest threat to King Sejong and Jang’s ambitions stems from the limits of the times, from the fact that Joseon was under the massive influence of its more powerful neighbor.

This threat is embodied in the Yeonguijeong -- the holder of highest governmental position of Joseon -- whose practical, conservative views clash with those of the king. Yet he has valid reasons and concerns born out of his loyalty for the country.

The third act is where I think viewers will be divided. It centers on a real-life event: The king’s “gama” -- a wooden carriage that the rich and powerful used for transportation -- breaks and Jang is punished for it.

But the film mixes it up with Joseon’s conflict with China, the quarrel between King Sejong and his subjects and the creation of the Korean writing system, Hangeul. Then, it gallops toward an emotional climax that goes back to the friendship between the two main characters.

How this part is received may depend on what viewers think of King Sejong and Jang at this point. Those who aren’t behind our heroes may find it a bit contrived, but those who connect with them will be overwhelmed with emotion.

Overall, the closest comparison to “Forbidden Dream” is another Joseon era-set film titled “The Face Reader,” released in 2013. It goes a similar route with charming characters, great chemistry, funny scenes, meaningful lines and an emotional ending.

As many Korean films are wont to do, this one does get a little too emotional in the end. The difference is that “Forbidden Dream” has earned it.

The central friendship and the characters’ mutual respect for their shared dream are depicted beautifully in what may be the best chemistry between two leads of all the Korean films released this year. As great as Han and Choi are, they are even better together. This film is worth checking out just for that.