The festive feast could be on food of any kind from sushi to fried chicken, pizza or a bowl of rice with good old doenjang jjigae. Whatever the choice is, many folks here like to finish it with a cake, since Christmas has somehow become one of the two special days in a year to be celebrated with a cake, the other being the birthday.

Here are some ideas for hassle-free party meal preparations this season, encompassing offerings from supermarkets to luxurious five-star hotels.

As soon as the winter begins, bakeries and cafes gear up for the biggest cake season of the year. It is said that on Christmas Eve alone, bakeries rack up nearly one-tenth of their annual cake sales. 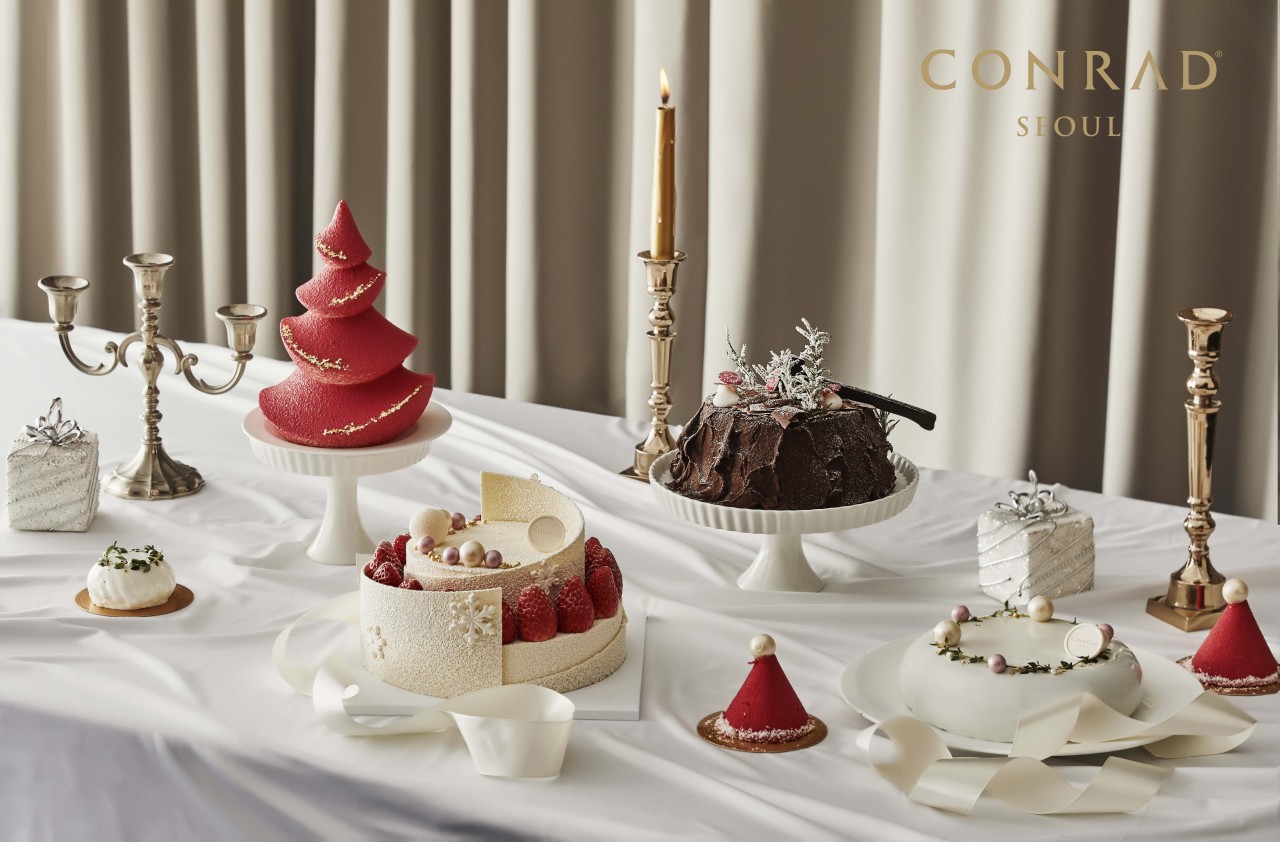 Christmas cakes from Conrad Seoul
For Paris Baguette, South Korea’s largest bakery chain -- which by the way has nothing to do with the French capital -- the strategy seems to be “whatever you’re looking for, we have it all here.”

On top of its regular cakes, the bakery offers sponge cakes with festive designs featuring Santa Claus, snow-covered cottages and Christmas trees. This year, it has added more creative renditions to the lineup -- cakes inspired by the work of the late American pop artist Andy Warhol. One of these, a pure white minimalistic cake, features a red ornament on top in the shape of a high-heeled shoe filled with boughs of holly. The company is offering a 20 percent discount on all preorders.

Given the explosive popularity of “Frozen 2” here, it is only natural that animated characters from the film appear on top of Christmas cakes. Tous les Jours is one of the bakers that has joined hands with Disney, targeting families with young children. 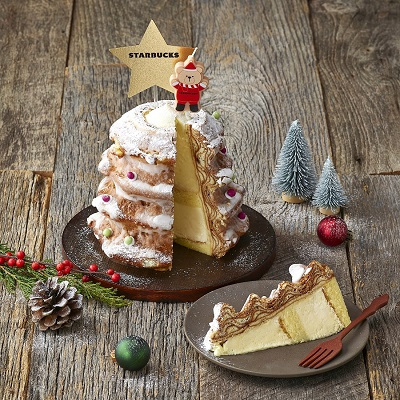 Christmas cake from Starbucks
Among coffee chains, Starbucks is again a strong contender this year. The US coffee giant has five different types of cakes on offer, available for preorders only until next Monday. Cake buyers get two drink vouchers and a party package that includes a Christmas tree garland, plus ornaments and candles.

Coffee and dessert cafe A Twosome Place has introduced four seasonal cakes based on the theme of Northern Europe, where Santa Claus hails from. 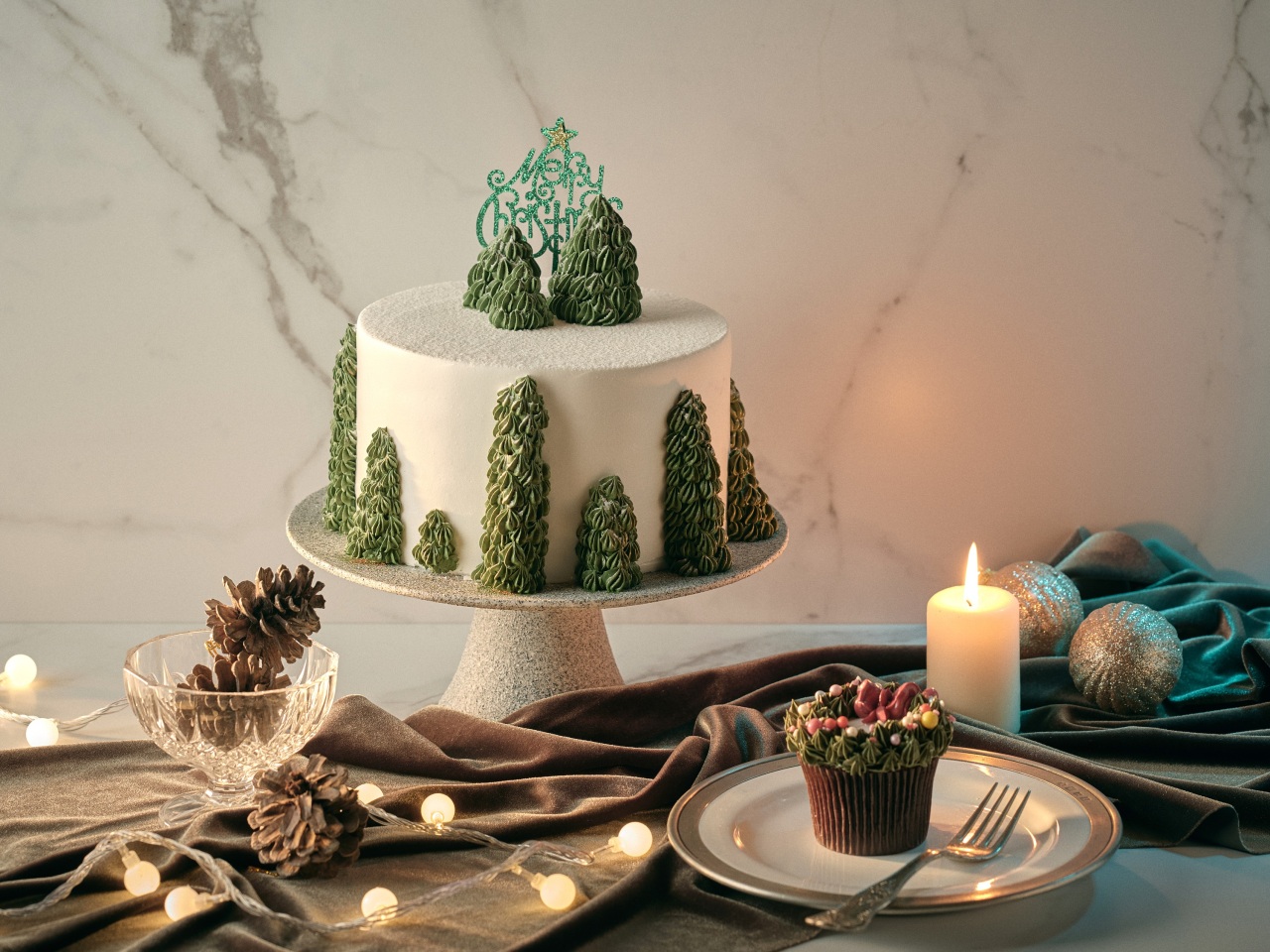 Christmas cake from Grand InterContinental Seoul Parmas
Since cakes have such a huge presence in Christmas celebrations here, a growing number of people go for over-the-top renditions from luxurious hotels, never mind the hefty tab.

Hotel patisseries compete with their finest and most visually stunning renditions, available only in the month of December. Hotel Shilla has introduced the all-new Silver Lining Cake, an airy and moist cheese souffle cake, in addition to its beloved signature White Holiday Cake, available at the Pastry Boutique this month until Christmas Day.

Cakes from The Shilla Hotel
The Grand Hyatt’s Deli has come up with a series of ornament-shaped cakes that require some hammering to break the chocolate frosting and enjoy the soft chocolate mousse and berries inside. It is safe to make reservations three days in advance if you want a cake from one of these hotels.

If you want an American-style dinner, it can be had -- for a price. Most large hotels offer pre-baked turkeys to go. Prices depend on the size of the bird, as well as on the stuffing and side dishes provided, but expect somewhere between 200,000 won and 300,000 won. 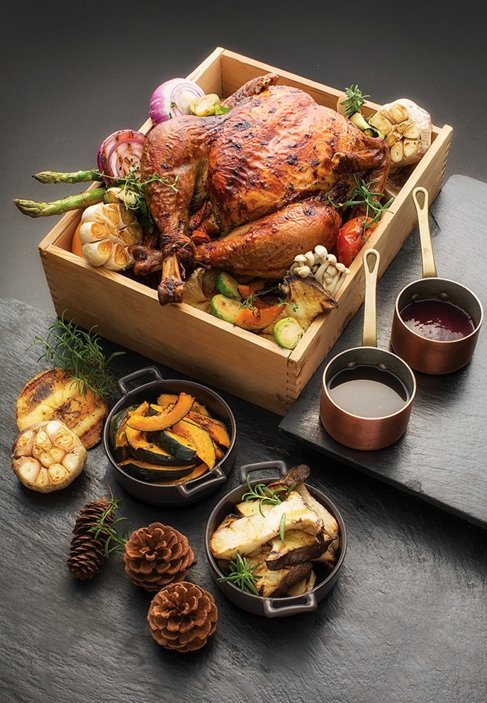 For those preferring lamb over turkey, Glad Hotel’s casual dining restaurant GREETS offers its signature lamb dishes online via one-day shipping grocery store Market Kurly. Five different cuts, complete with a packet of the hotel restaurant’s own seasoning, are available for grilling at home, with 300 grams of T-bone priced at 16,000 won.

Good news for wine lovers. The nation’s big three supermarket chains -- E-mart, Lotte Mart and Homeplus -- are in a wine war this season, resulting in a vast selection of “value for money” options for customers. Their main battlefield is the under-5,000 won category, but they have also beefed up higher-value wine collections for the party season. 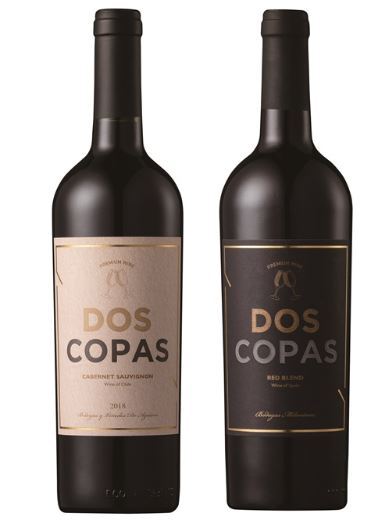 Under 5,000-won wines from E-mart
E-mart, the largest of the three, started the war with its launch this summer of 4,900-won Dos Copas wines, sourced from Spain. As of late last month, the company had sold a whopping 920,000 bottles. Reviews are poles apart on this wine, but one thing looks clear -- it is good value for that price.
Earlier this week, Lotte Mart came up with its secret weapon -- the “Natua” sauvignon and merlot wines sourced from Chile’s Montgras vinery, priced at 4,800 won a bottle.