[ The Korea Herald – Send E-mail ]
[Feature] Frank penguin becomes new star of year, breaks stereotype of EBS characters
By Park Yuna
Published : Dec 9, 2019 - 12:53
Updated : Dec 9, 2019 - 22:03
A 210-centimeter-tall penguin walks into a room for an audition at Educational Broadcasting System, insisting he wants to be a star creator. The penguin, who has a strand of seaweed and a seashell on its head, explains that he swam all the way from the South Pole. The 10-year-old’s ultimate goal is to become as popular as BTS.

Speaking in a cute -- sometimes husky -- voice, Pengsoo raps, breakdances and even yodels -- a skill he picked up in Switzerland on his way to Korea. When the judges say they will notify him of the results at a later date, Pengsoo baffles them by saying, “Please discuss it here now, otherwise I will visit KBS or MBC (broadcasting companies) to debut.” 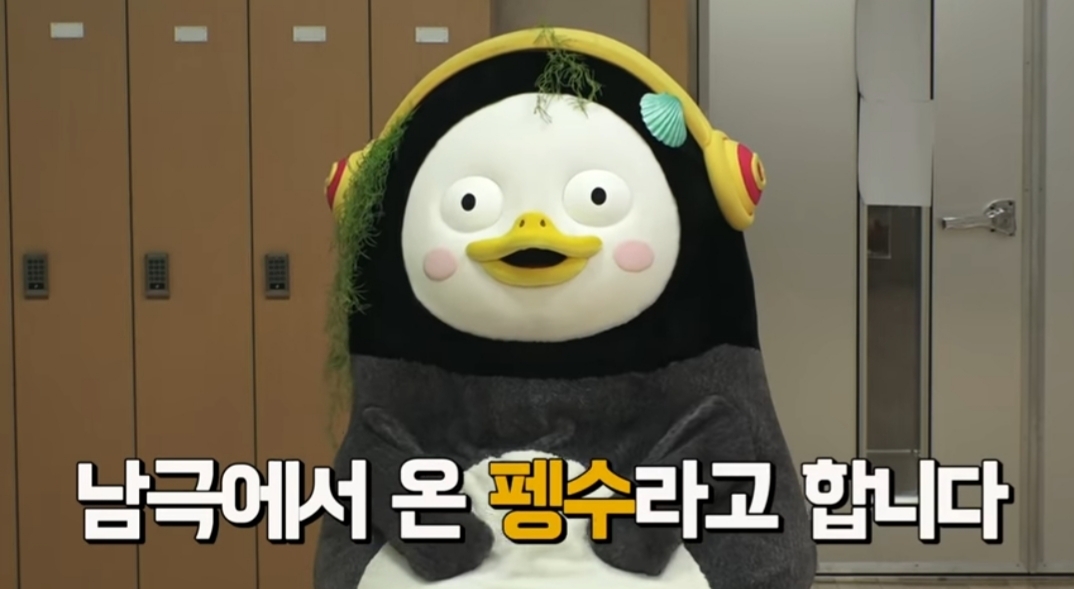 Pengsoo introduces itself at an audition, with seaweed and a shell on his head. (YouTube channel, Giant PengTV)
The costumed penguin character with a straightforward attitude has fascinated people in Korea, frankly voicing its opinions and feelings.

Although it could sound a little rude, the way Pengsoo acts doesn’t offend people thanks to its adorable and warm-hearted personality.

Since its debut in April, Pengsoo’s YouTube channel, Giant PengTV, has attracted 1.3 million subscribers. It has also earned the YouTube Gold Play Button, bestowed by the video-sharing platform.

A diary featuring Pengsoo remains the bestseller on Yes24, a major online bookstore in Korea, since it was released in late November. Pengsoo was also chosen as one of the Persons of the Year 2019 in an online survey of 2,333 adults conducted by Incruit. It was followed by BTS.

An online petition was even filed on the Blue House’s website, calling for a raise in EBS’ license fees. The petition said only 3 percent of the license fees go to EBS, relatively small considering EBS’ contribution to education in Korea amid the popularity of Pengsoo.

“Pengsoo’s voice and appearance are quite cute, but the way it speaks is sort of an unexpected charm breaking the stereotype of EBS characters,” says Shannon Lee, 43. “I jokingly told my friends that I am so into Pengsoo that I wish I could fall asleep talking with the penguin all night.”

Pengsoo was originally produced for teenagers. Its production team realized that most EBS characters focus on preschoolers, so it decided to create a character for teenagers with a different personality from other existing EBS characters, which tend to be nice and gentle for educational purposes.

The character goes against the norm. For instance, it refers to EBS CEO Kim Myung-joong by his name without his title, which is considered rude in Korea.

However, Pengsoo says, “A company functions well when the CEO is like a friend to employees.”

The penguin also treats managers and producers as its friends.

Most of all, Pengsoo is loved for his warm-hearted personality. One of the episodes on YouTube shows how Pengsoo encouraged an elementary student who is not good at running compared to others.

“First of all, you can’t be good at everything; Pengsoo is also slow when running. You surely have at least one thing you are good at, so just improve it even better rather than focusing on your weakness,” Pengsoo said.

Han Bo-yeon, a 36-year-old employee, watches Pengsoo every day after work. “I feel like my self-esteem recovers thanks to Pengsoo, as he mentions many things about loving oneself,” Han said. 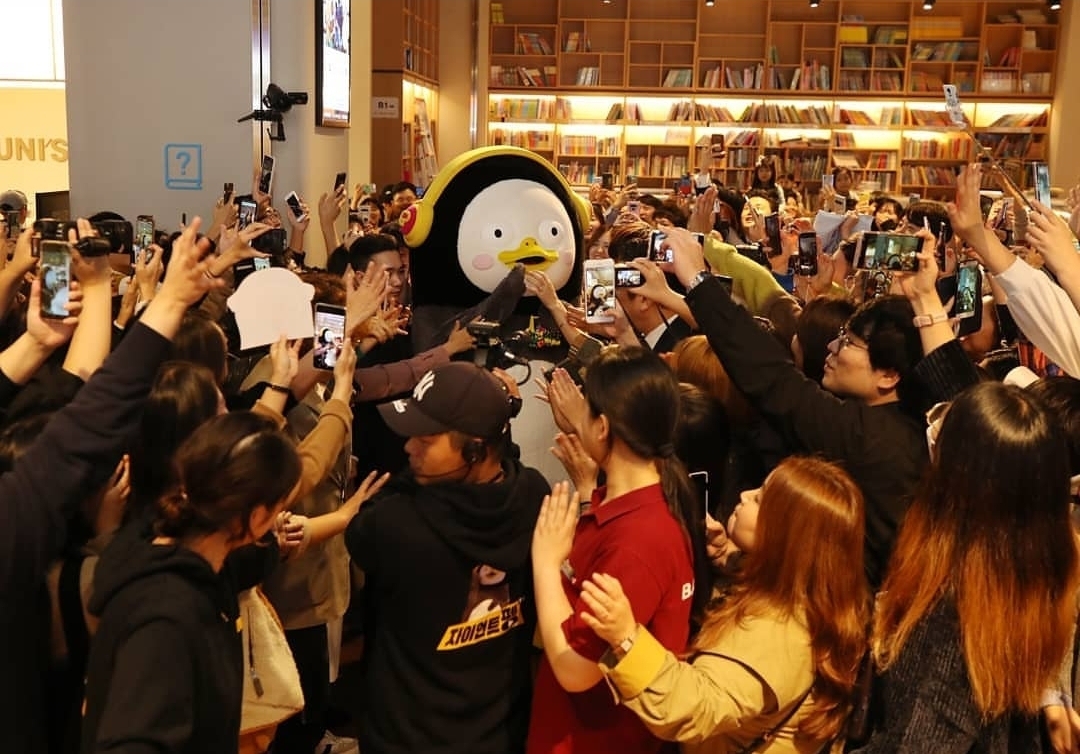 Pengsoo fans flock to a fan meeting in Busan in October. (giantpengsoo Instagram)
Pengsoo’s popularity also lies in EBS’ expanding to YouTube for the character, an unprecedented move for the company.

Although Pengsoo appears on TV, videos featuring the character are uploaded on its YouTube channel, including behind-the-scenes cuts that have not aired on TV.

This has drawn people from all generations to watch Pengsoo, even those in their 60s and above.

Lee Sung-hee, a 60-year-old resident of Jeju Island, goes on YouTube every day to watch videos featuring Pengsoo since she came across the character on TV. Pengsoo has revitalized her retirement life, she said.

“The news mentioned Pengsoo, and it evoked my curiosity, so I searched about it on YouTube when the character’s subscribers were about 400,000,” Lee said. “And I found Pengsoo so lovable. I downloaded Pengsoo emoticons on KakaoTalk and even bought them for friends,” Lee said.

Lim Anna, a 14-year-old elementary school student, has organized an open chat room through KakaoTalk for Pengsoo fans to share photos, videos and up-to-date information. “I am so proud that Pengsoo is getting popular across all generations,” she said.

Pengsoo has also been a refreshing change from the series of tragedies and scandals that have plagued the entertainment industry this year, including the deaths of three young artists.

“Many people, including myself, have become sick of entertainment news, and this funny, warm-hearted character caught my eye,” said Clair Yoo, an officer worker in her early 30s.

As demand for Pengsoo items is surging, companies are seeking to produce merchandise related to the character, including fashion brand SPAO.

The items are expected to go on sale in earnest starting mid-December.

“Pengsoo has become my role model,” said Han Jeong-yeon, a 19-year-old college student. “Once the items go on sale, all my money will be spent on them.

“As Pengsoo gains popularity, some people have tried to reveal who is really inside the costume, and there has been some gossip about its attitude, which I am deeply worried about, because I want Pengsoo to stay with us for a longtime,” Han said.