[ The Korea Herald – Send E-mail ]
Lee Ja-ram transforms ‘Old Man and the Sea’ into pansori
By Shim Woo-hyun
Published : Nov 28, 2019 - 18:10
Updated : Nov 28, 2019 - 18:10
Pansori artist Lee Ja-ram is known for her success in taking the audience to places that are utterly new. Her latest work, “The Old Man and the Sea” at Doosan Art Center, does a perfect job of bringing Ernest Hemingway’s story of a Cuban fisherman to the stage. 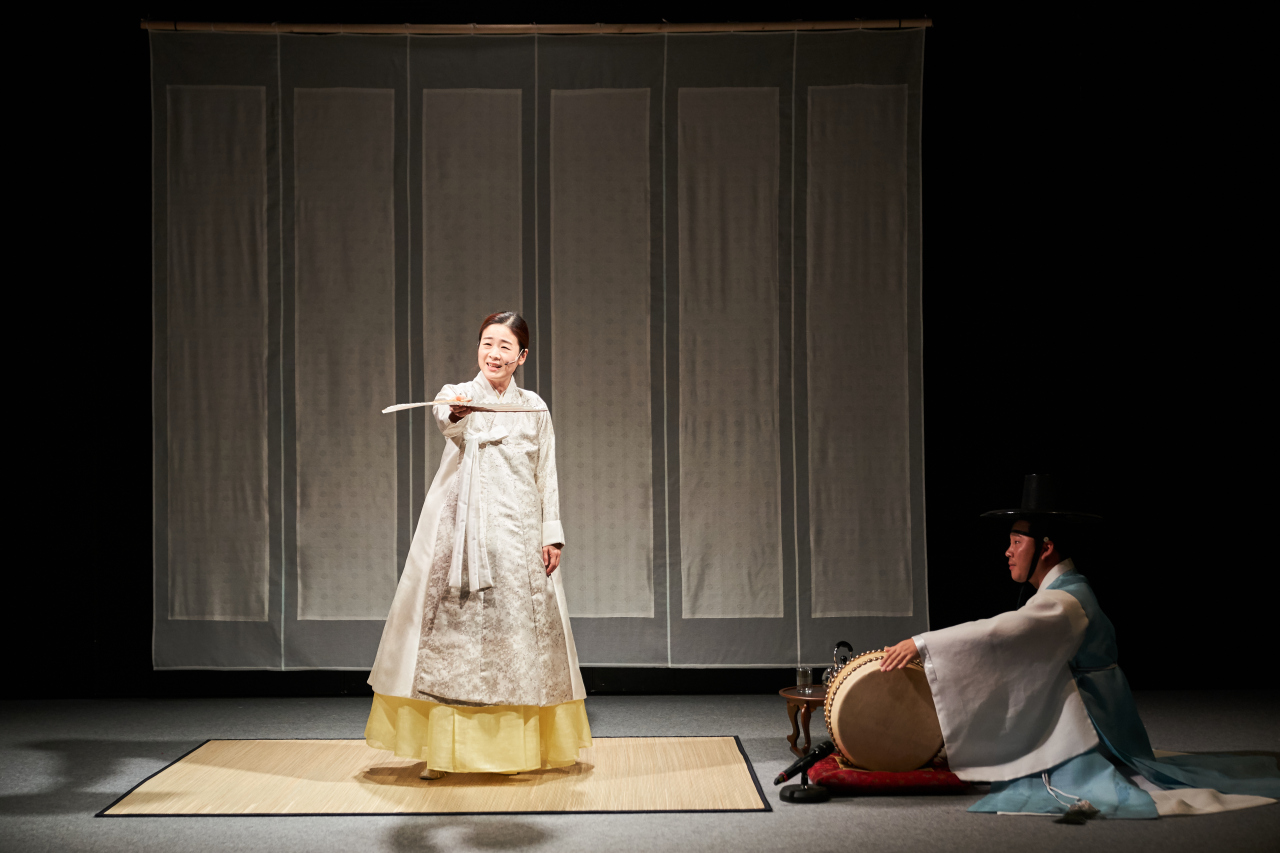 Lee Ja-ram (left) and Gosu Lee Jun-hyoung perform her pansori version of “The Old Man and the Sea” at Doosan Art Center. (DAC)
Lee’s “The Old Man and the Sea” takes the form of pansori, or traditional Korean narrative singing. Except for a few changes, Lee’s pansori production follows the original storyline of Santiago, Hemingway’s fishermen from Cojimar, a small seaside town east of Havana, Cuba.

A big difference from the novella, however, is that Lee’s work is a one-person performance based on the traditional pansori genre. In this production, Lee makes an audible story from the classic short novel with the help of a drummer, or gosu, who accompanies the singing with a traditional percussion instrument.

Lee is basically the only person who moves the narrative forward. She sings the story, at times narrating the details to the audience, like the background and setting, as well as descriptions of characters.

Using body gestures, Lee brings the characters and settings to life. With a folding fan in hand, Lee can mimic everything, from the waves of the ocean to how the protagonist’s fishing rod snaps.

Highlights of the performance include scenes where Santiago and the large marlin engage in a struggle. Lee both sings and mimes the dayslong battle with the fish, expressing the physical and psychological tension Santiago undergoes.

“While I was reading the novel by Hemingway, I felt that I was sharing Santiago’s experience,” Lee said. “In pansori, experience is the important element, and the novel suits pansori in that respect. The physical workings of the old fisherman and the years of practice that he must have had, they all have things in common with a pansori performer.”

Lee made the foreign story easily comprehensible for Korean audiences. She uses slang, idiomatic expressions and even English to make the story more humorous and relatable in a contemporary world.

The performance also actively engages the audience sitting in front of the stage. For instance, Lee stops her narrative to teach the audience “jangdan” -- a cycle of drumbeats used in Korea’s traditional music -- and suggests clapping along.

Lee has also transformed other foreign literary works into pansori productions. In 2008, Lee adapted Bertolt Brecht’s “The Good Person of Szechwan” to create the pansori work “Sacheonga.” In 2011, she turned the German playwright’s “Mother Courage and Her Children” into “Eokcheokga.” In 2014, Lee introduced “Stranger’s Song,” an adaptation of Gabriel Garcia Marquez’s short story “Bon Voyage, Mr. President!” All three works have been performed abroad, in countries including Brazil, Romania, France, the US, Poland, Taiwan and Australia.

Lee’s “The Old Man and the Sea” runs through Sunday at Doosan Art Center.