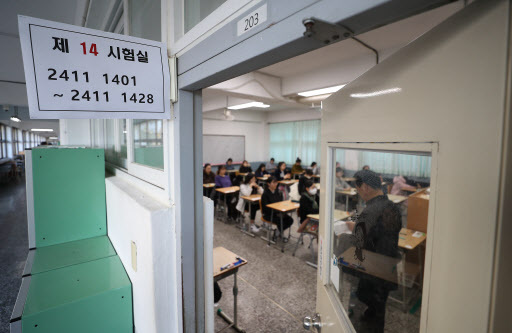 (Yonhap)
The College Scholastic Aptitude Test, locally known as Suneung, began at 1,185 exam venues across the country at 8:40 a.m. and ended at 5:40 p.m.

The Suneung, which has been held only once a year since 1993, covers five subjects, including Korean, math and English.

The level of difficulty for this year’s Suneung was in line with the high school curriculum -- easy enough for students who faithfully attended classes, said Shim Bong-seop, head of the exam committee.

This year’s test results are scheduled to be released on Dec. 4.

Two students were expelled from the exam, for submitting the exam answer sheet late and having a laptop, respectively. Electronic devices are not allowed inside the exam venues.

Airplane landings and takeoffs were banned from 1:05-1:40 p.m. during the English listening test portion of the exam.

Banks and government offices opened one hour late at 10 a.m. to prevent traffic congestion for applicants going to test venues. The local stock and currency markets also opened an hour later than usual, with their closing time also pushed back an hour to 4:30 p.m.

The operation of public transportation was expanded. Some 391 firefighters and 77 ambulance workers were also stationed near test sites. In Seoul alone, 416 police vehicles were dispatched to 125 locations on major routes to transport test-takers in cases of emergency.

Cold waves hit the country Thursday, with morning temperatures dropping to as low as minus 3 degrees Celsius in Seoul.