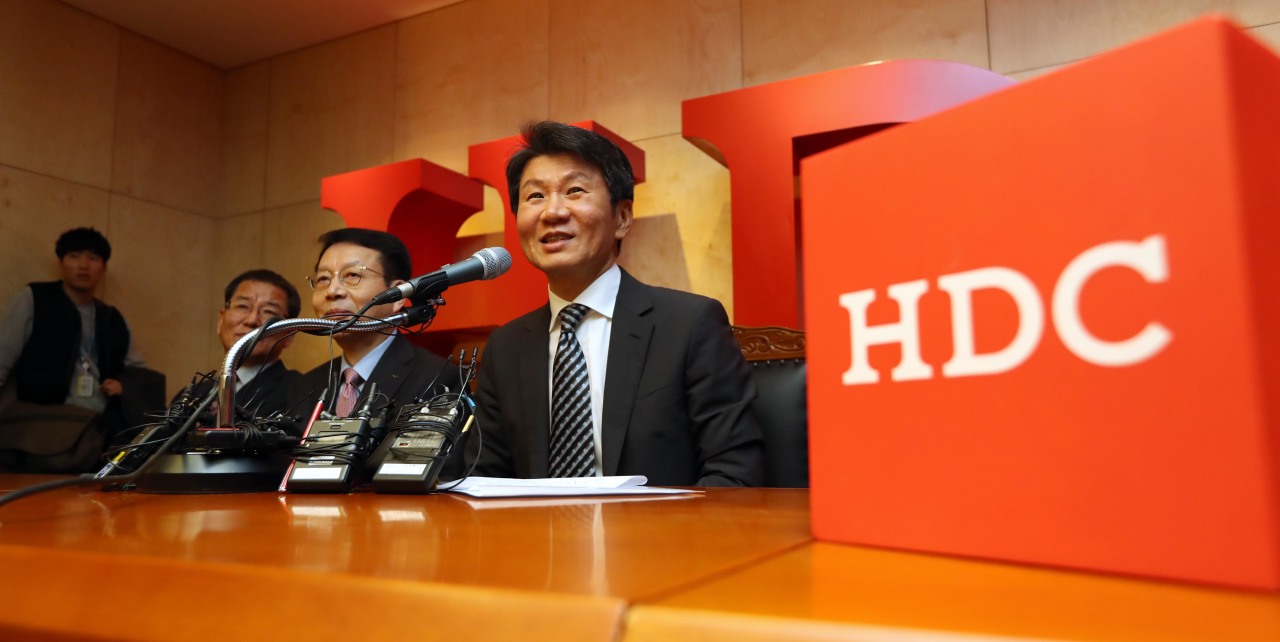 HDC Group Chairman Chung Mong-gyu (right) attends a press conference on Asiana Airlines’ acquisition at the company’s headquarters in Yongsan, Seoul, Tuesday. (Yonhap)
“We feel heavy responsibility after being designated as a preferred bidder. We believed acquisition of Asiana fits HDC Group’s sustainable business growth strategy and we will support Asiana Airlines to have the best competitiveness and the highest-level financial solidity,” HDC Group Chairman Chung Mong-gyu told reporters at its Yongsan headquarters on Tuesday.

Chung also said the group’s plan to inject some 2 trillion won ($1.72 billion) by issuing new shares in the air carrier would improve its financial solidity.

“The aviation industry is going through a tough time, and it is a competitive industry. When we issue the new shares worth 2 trillion won, the air carrier’s debt ratio will fall below the 300 percent level, which is not bad,” Chung added, saying that the acquisition will turn the air carrier’s “vicious financial cycle” into a “virtuous cycle.”

The latest megadeal involves HDC purchasing 31 percent of Kumho Industrial’s stake in Asiana, or some 68.6 million shares -- called “old shares” -- worth some 400 billion won as of earlier this month. This does not include a premium for the administrative rights.

It also involves HDC purchasing new shares to be issued by the airline, so that all proceeds from the sales flow to Kumho Group to rebuild the group’s finances.

Creditors of Asiana Airlines, including the Industrial Bank of Korea, are pinning high hopes on getting a higher stock price as HDC offered more than their stated minimum of 800 billion won for the new shares.

As of the end of the first half of this year, Asiana’s total debt stood at 9.6 trillion won. Many market insiders have questioned the company’s funding power, as the air carrier’s huge debt and unstable cash flow may be difficult for HDC to shoulder alone.

Commenting that HDC had the financial capability to acquire Asiana alone, Chung decided to team up with Mirae Asset and its founder, Park Hyeon-joo, “to learn from the insight of Chairman Park, who has carried out various mergers and acquisitions.”

Once HDC acquires Asiana, Chung said, it will make flight safety the priority and will create jobs instead of pursuing business restructuring or manpower adjustment.

“Acquisition of Asiana will be a step forward for us to become a mobility group,” he said, adding that its aviation business will synergize with its other units, mentioning the example of in-flight duty-free service.

With regard to what he plans to do with Asiana’s budget airline brand Air Busan, Chung said that decision would require more strategic thinking. Asiana holds a 45 percent stake in Air Busan.

As for the name Asiana Airlines, Chung said it will not change for now as Asiana has built good brand value.

The Korea Development Bank-led creditors have been requesting a “competent” buyer to acquire the Asiana stake and to purchase new shares to be issued by the airline, according to the state-run KDB.

In a preliminary bid, the HDC consortium reportedly suggested around 2.5 trillion won in total investment for the acquisition. That was about 1 trillion won higher than the bid suggested by Aekyung Group and the KCGI consortium.

Through the process, HDC and Aekyung received evaluation and approval by the Transport Ministry as to their capability to serve as the largest shareholder of the aviation and transport business. KCGI did not apply for ministry evaluation.