South Korea's Yeom Da-hoon set an Asian record as he won a gold medal at a continental youth weightlifting competition in Pyongyang on Friday.

Yeom was the top performer in the men's 89-kilogram division in the 2019 Asian Youth & Junior Weightlifting Championships after clearing a combined total of 358 kilograms. 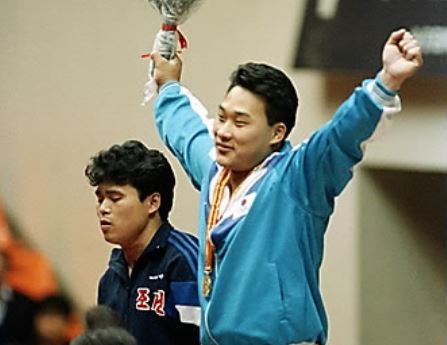 Yeom Da-hoon (Yonhap)
Yeom, a son of the 1990 Asian Games weightlifting gold medalist Yeom Dong-chul, was third in the snatch at 160kg, but became the overall leader after lifting 198kg in the clean and jerk.

With the performance, Yeom also became the first South Korean weightlifter to have the South Korean national anthem played in Pyongyang since 2013.

Park Hyeong-o clinched the first gold for the South Korean team at the competition on Wednesday, but no anthem was played or flag raised as he only topped the snatch event. (Joint Press Corps-Yonhap)