[ The Korea Herald – Send E-mail ]
Cho Ji-hoon's poems capture beauty of Korean life
By Korea Herald
Published : Oct 25, 2019 - 11:12
Updated : Oct 27, 2019 - 10:40
“News in brief from New York” was a small book party in which outgoing Korean Ambassador to the United Nations Cho Tae-yul read a poem from “Shedding of the Petals,” the first book of poetry by his father Cho Ji-hoon in English, published here in New York last month.

A famous poet in the 1940s-60s, Cho passed away in the late 1960s. I knew both well. I read the senior Cho’s poems during my high school and college days. I met the junior Cho when he started his diplomatic career in Washington in the 1980s.

I invited the younger Cho to the Korean Poets and Writers Group to speak about his father’s life and poetry as his son. He lost his father when he was in middle school, so he did not have much to talk about back then. It seems to me that he has learned a lot between then and now. In between, I visited the Cho Ji-hoon Literary Museum in his hometown, Joosil Village, 70 kilometers from Andong, North Gyeongsang Province.

The Andong area was home to the first community of neo-Confucian scholars in the Joseon era since the 16th century, where the poet learned Chinese classics from his grandfather in his youthful days. 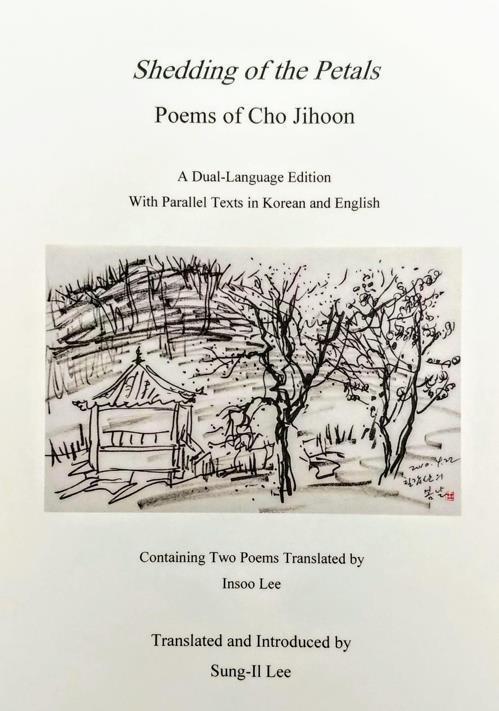 After Korea’s liberation from Japanese colonial rule in 1945, the poet was offered a teaching job at Korea University. He was already famous at that time, one of the three nature-oriented poets of Cheongnok-pa, or the Green Dear Group. His 20 years at the university before his early death would be remembered for his advocacy of the traditional Korean culture and literature and his courageous opinion writings on democracy and freedom in the 1960s.

On April 19, 1960, I participated in a street protest of Yonsei University students against the rigged and corrupt presidential elections that eventually toppled the Syngman Rhee government. Some demonstrators were gunned down in front of the central government building. Under fire, we threw ourselves on the pavement. After a while, I opened my eyes and looked up. There I saw Cho and Park Doo-jin, two of the Cheongnok-pa poets. Park was my college professor. I could never forget the moment when our eyes met. They were standing on the roadside and watching down on us. After a few days, President Syngman Rhee resigned and was exiled to Hawaii.

During his days at Korea University, Cho lectured on Korean culture and art in his traditional Korean clothes. The Korean dress was his trademark. He believed in the beauty of traditional Korean poetry and culture. The titles of his three famous poems, “Buddhist Dance,” “Flower Petals on Sleeves” and “Old-Fashioned Dress” may eloquently speak for his mind and heart.

His poems were products from his scholarship in Korean history and literature, and his appreciation of nature -- changing seasons, flora and fauna, white clouds over blue sky, and mountains and rivers.

When I read his poems in this new book of poetry, I reconfirmed that Cho’s ideas and thoughts dwelt on the traditional Korean objects (e.g., an ancient temple, a bamboo flute player, gayageum string music), and arts. His language was rather antique, such that today’s young people cannot use or comprehend it easily. He accepted life as a given and appreciated what he had in the intellectual heritage of the nation.

He even accepted his forthcoming death as an order of nature. Following was his last known poem. I can see his spirit vividly. I can see a kind of his farewell to life. I quote the last five lines from his “To my Illness.”

To life, it still is boundlessly beautiful,
And even if torture is in store in the netherworld,
I am not really afraid of dying.

You were a friend dear to me,
And one to whom I harbor reverence.

If I have the freedom to choose one poem from this volume, it is “Flower Petals on Sleeves.” The poem was written in 1942 after he first traveled to Gyeongju, North Gyeongsang Province, where Pak Mok-wol, one of three Chongrok-pa poets, lived. This poem was sent to Pak after their first encounter. Then, Pak produced his most famous poem, “Wayfarer,” in response. I still admire their friendship with poetry.

I found almost all of Cho Ji-hoon’s poems in this volume; however, I could not find one famous poem, “Buddhist Dance,” in it. Translation of that poem must have been almost impossible for anyone. Omitting that poem is a critical weakness of this book.

“Moonlit Night,” the title of a poem in this book that I once translated as “Old-Fashioned Dress,” may mean something different to the translator. “Spring Night” is a better translation than “Moonlit Night.”

Professor Lee Sung-il of Yonsei University, translator of this volume, emphasized Cho as a dreamer.

Of course, poets are dreamers.

But in Cho’s poems, I see a poet’s will to conserve and preserve the beauty of traditional Korean life, and his reflections as a social thinker, especially in the late stages of his life.

Choi Yearn Hong is a poet and writer based in northern Virginia in the US. -- Ed.