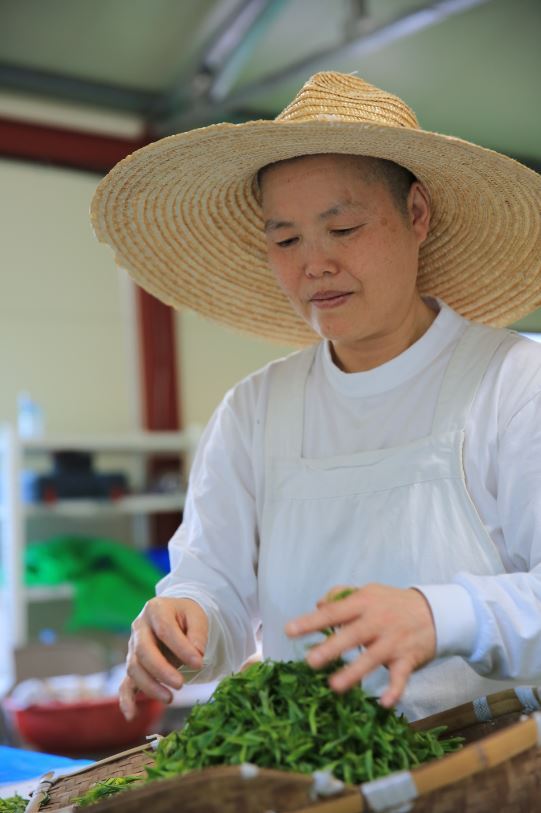 Ven. Myoudeok preparing freshly harvested tea leaves for roasting. (Photo provided by Ven. Myoudeok)
In her light-gray Buddhist robes, she sat among coffee and tea masters who had come from across the country to discuss the latest trends in brewing and blending. Her trade is the centuries-old tradition of Korean green tea.

“I see a lot of confusion in our tea culture -- what makes good tea, how tea should be made and consumed,” the Buddhist nun said. “I look back on the first tea I learned long ago at Seonam Temple and find all the answers there.”

The Buddhist temple in Suncheon, South Jeolla Province, is well known for its long tea-making heritage and a vast field of wild tea plants. It is also the place where she was ordained as a Buddhist nun at the age of 36.

“Before ordination, I had accompanied Buddhist monks of my acquaintance to the temple several times during the tea harvest season in spring.”

Tea leaves are picked by hand from wild trees -- some several hundred years old. They are sorted, roasted and rubbed. The process is repeated nine times.

She worked alongside monks and disciples, observing and absorbing how the masters treated the leaves, depending on the quality of leaves, moisture content and other variants such as the weather.

“What I learned is to give what the tea leaves need,” she said. 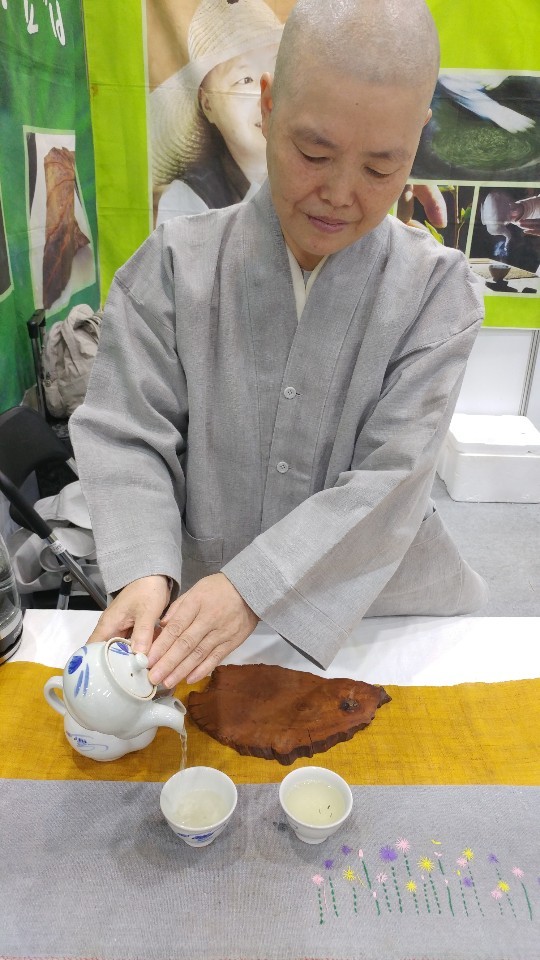 Ven. Myoudeok pours a cup of her nine-time roasted green tea at the Coffee and Tea Fair held last week in Yangjae, southern Seoul. (Lee Sun-young/The Korea Herald)
Simple it may sound, it requires years of study and experience. It cannot be learned from textbooks, she added.

Asked about adjustments that can be made to the process, Ven. Myoudeok discussed how to prepare tea that has been harvested after a rainstorm.

“Ideally, it is not good to pick tea leaves after rain. But in reality, it happens. When tea leaves are moist, they are heavier and slow to move around in the cauldron, which means my hands need to be nimbler in mixing them to ensure each and every leaf gets the precise amount of heat it needs,” she said. “Because it is that one leaf not properly roasted that spoils the taste.”

She heats up the cauldron to 400-450 degrees Celsius and roasts the leaves for about four or five minutes, mixing them nonstop with both hands, protecting them with multiple layers of cotton gloves.

After each roasting, the tea leaves are rubbed against a clean cloth. Then they are left to dry until the next roasting.

“Tea has many health benefits. On the other side, it has a very strong cold character. That’s why our ancestors chose to roast it nine times with such high temperatures,” the nun said.

Nowadays, people don’t know how many times the leaves are roasted.

“Many people have asked me what makes a good tea. My answer is always the same. Tea that doesn’t do you harm is good.” 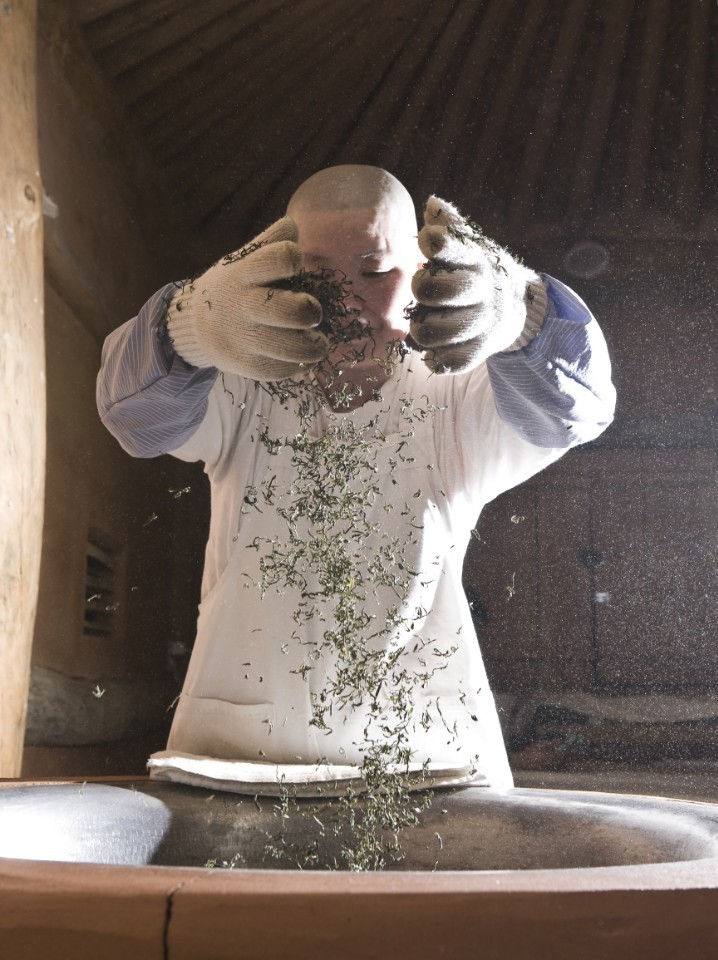 Ven. Myoudeok roasting tea leaves in an iron cauldron (Photo provided by Ven. Myoudeok)
For her, tea is like a spring of happiness. It has helped her through difficult phases in her life, brought many happy memoires and led her to good people. The happiness, she said, is in that first cup of tea she has in the morning.

As the interview continued, she turned on an electric kettle. “Let’s have some tea,” she said. Some, for her, is nine cups. After roasting her tea nine times, she steeps it nine times too.

“First brew is to be thrown away? I don’t do that. There’s no reason to waste tea that’s been made properly.”

“Some people wait until it cools down to 70 degrees or so. But I don’t do that either. I pour as soon as the water boils and sip. With tea leaves in it, it doesn’t feel that hot,” she said as we shared our first cup.

The scent of green tea soon filled the air and Ven. Myoudeok’s face brightened up as we had more cups. “My favorite is the fifth cup,” she divulged. “That’s when tea tastes best to me.”

Contrary to her strict and uncompromising approach to the tea-making process, she is surprisingly relaxed when it comes to drinking it.

“Just enjoy the tea as you like and try to focus on yourself or the tea itself. If the tea ceremony has rigid stages to follow, it overshadows the very essence of tea appreciation and self-reflection,” she said. “As a tea lover, I have a collection of teapots and tea cups, but a good tea is a good tea even in a mug.”

She currently resides in Sejong, where she engages with several tea culture communities. She has founded a “society for tea roasted nine times” and hopes to contribute to the restoration of Korea’s traditional tea culture.

Every spring she visits her tea craft base camp at the foot of Jirisan, where wild tea plants grow and the villagers make a living by picking them and various other seasonal bounties.

Our tea session was nearing its end. From four or five cups onward, our faces were slightly reddened and we both were sweating. The tea is now pale yellowish green, with surprisingly no hint of bitterness.

“When tea tastes good, it empties me. Whatever was on my mind, the tea blows it away,” she said.

Even after it is roasted and dried, tea continues to ripen and reaches its deepest flavor in the cold winter months. “The best of the best is when it snows outside, you cozy up in a warm place and you have a good tea to brew.”