The writer, 83, has been one of the most influential literary figures in Europe since his debut in the 1960s. In 2005 he became the first winner of the Man Booker International Prize for the full body of his work. He is also an often-mentioned nominee for the Nobel literature prize. 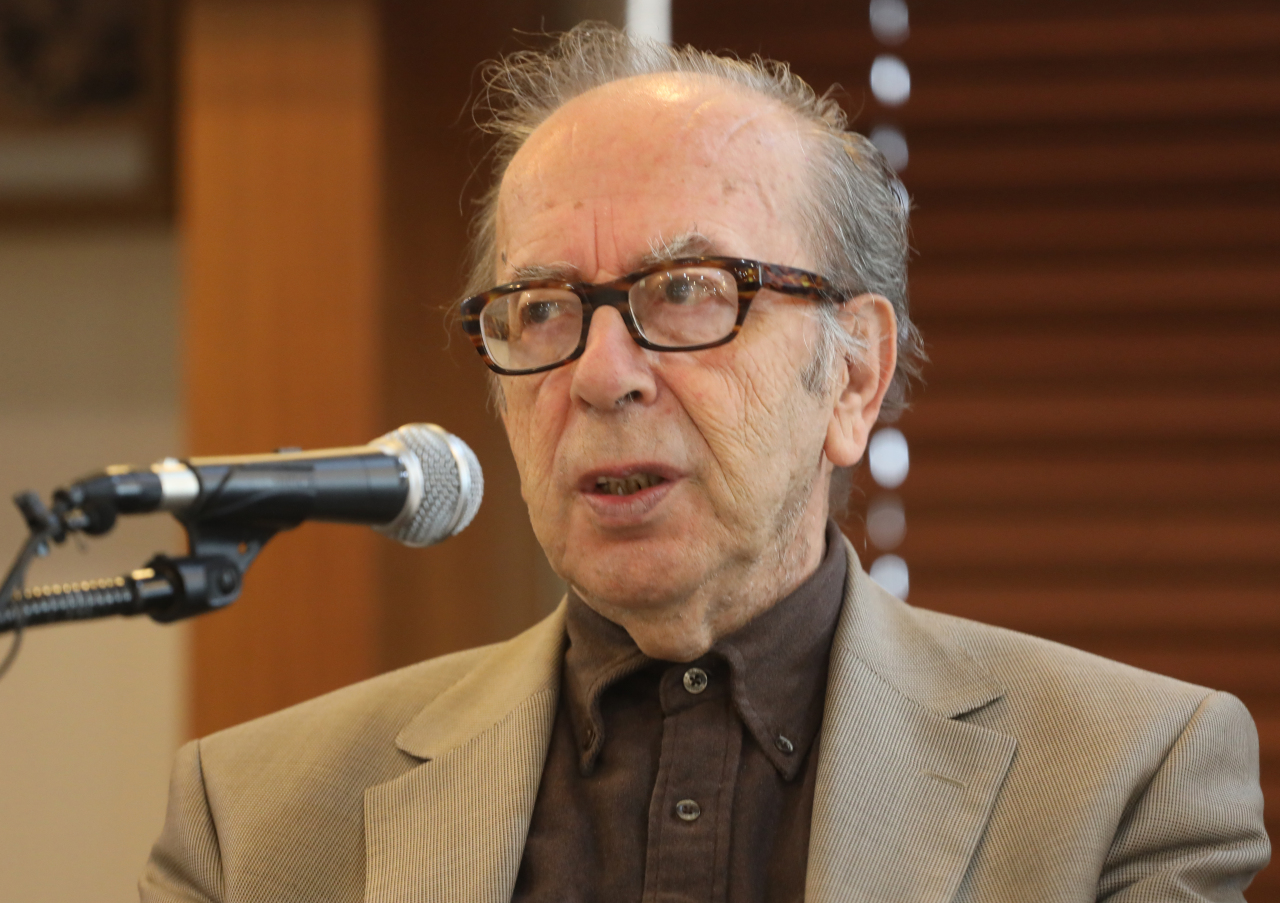 Albanian novelist Ismail Kadare speaks at a press event held at the Press Center in Gwanghwamun, central Seoul, Wednesday. (Yonhap)
The Paris-based writer delves into the history and the experiences of the Albanian people, criticizing the totalitarian regime of the late 1960s. He debuted in 1963 with “The General of the Dead Army,” which depicts the horrors of war.

His best-recognized works include “The Siege,” “Broken April” and “Spring Flowers.” More than 10 of his novels, written in Albanian, have been translated into Korean.

“Albania had been one of the most isolated nations in Europe. It was a communist country under dictatorship,” Kadare said in French at a press event held at the Press Center in Gwanghwamun, central Seoul, Wednesday.

With Albanian capital Tirana a short distance across the Adriatic Sea from Italy, “people could feel the influence of the Western world,” he said, looking back to the 1960s. “But they have acted as if such influences do not exist. It was forbidden to speak about how the Western world is so close.”

Albania was the last country in Europe to see the fall of the communist regime in the 1990s. Struggling under governmental oppression, Kadare sought exile in Paris just before the fall of the regime.

“When my books were first published in the Western world, the countries were the nations that Albania had labeled enemies,” he said. “It was evaluated that human rights were not respected in Albania. Writing novels in such a nation, I was in a strange situation. The experiences must be reflected in my works.”

He is recognized for using myths and fables to satirize the communist regime.

“It is not just me who uses the tales for writing. Satire is practiced in Albania and many other communist countries,” he said, referring to the genre as a “processed fantasy of history.”

“For me and other writers, satire is a way to express our thoughts against the power oppressions (of communist regimes),” he said.

This year, the Pak Kyong-ni Prize, in its ninth year, saw 45 international nominees. A committee consisting of literature professors and critics drew up a short list of seven writers.

Kim Woo-chang, the head of the jury, said in a press release, “Kadare’s works make us think, ‘What is the desperate truth of life?’ amid the links between historical events.”

The official award ceremony will take place Saturday at the Toji Cultural Center in Wonju, Gangwon Province, and the writer is to receive 100 million won ($84,173).

The Pak Kyong-ni Prize, established in 2011 by the Toji Cultural Foundation, pays homage to writer Pak Kyong-ni (1926-2008), one of the most important writers in the history of Korean literature.

Park wrote “Land,” a social drama featuring hundreds of characters that examines the lives of the Korean people from the late Joseon Dynasty through the Japanese occupation till the liberation.