Named Bomy, the robot assists cognitive training for patients in the early stages, or at the risk of developing dementia.

Ewha Womans University Mokdong Hospital’s Robot-assisted Cognitive Training Center opened its doors in April, and is headed by Dr. Kim Geon-ha, a neurologist who has been researching related technologies since 2009. 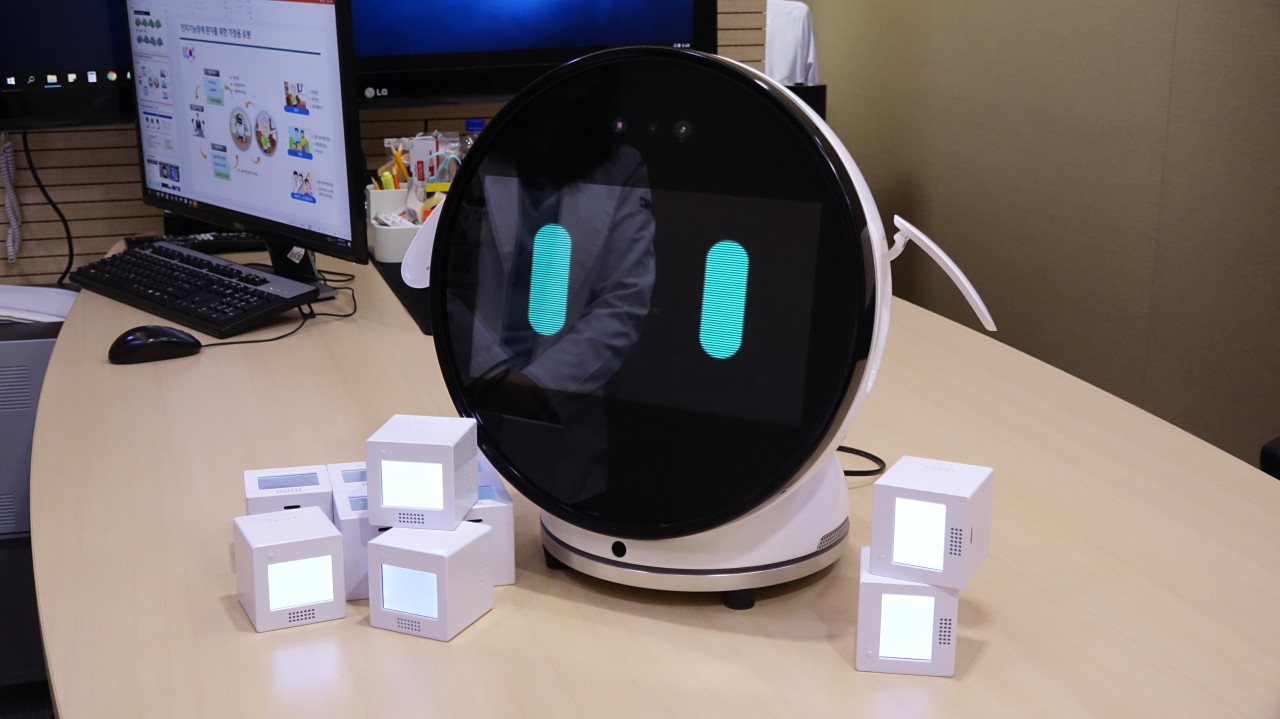 Bomy is a cognitive intervention therapy robot for patients with mild cognitive impairment. (Kim So-mee/The Korea Herald)
The hospital’s center entered into a memorandum of understanding with Robocare, a Korean care robot developer company, in February after which they jointly bagged a robotic dementia care project from the Ministry of Science and ICT.

The center targets patients at risk of developing dementia as well as those in early stages of cognitive impairment, Kim said.

“A lot of people equate Alzheimer’s disease with dementia which is a blanket term for regression in cognitive functioning to the extent where it hinders a person’s ability to perform daily tasks,” she said. “Age is also a main risk factor.”

While aging is one of the biggest risk factors for developing dementia, that doesn’t mean everyone will be affected by it in old age, according to Kim.

Bomy, equipped to run some 20 different types of multidomain cognitive training games, is a robot programmed as a patient’s grandchild, as most who receive care are elderly.

“Some of the training activities (Bomy offers) include shopping for groceries, making phone calls and playing musical instruments with it,” Kim said.

She said Bomy’s “simple, intuitive interface and friendly features” allows a patient’s encounter with the robot to be less daunting.

“I think my patients gain courage from the fact that they are able to navigate this new, state-of-the-art technology.”

The robots also make the otherwise dreaded experience of coming to the hospital more enjoyable, she added.

“When my patients visit the center for the first time, they have a vague fear of this condition of which they have a rather ambiguous understanding,” Kim said.

“But they find the assistance from robots amusing, and the systemized training empowers and encourages them to think that they are in control.”

With robots, patient assessments are automated and training sessions are customized to each patient’s needs, Kim said. 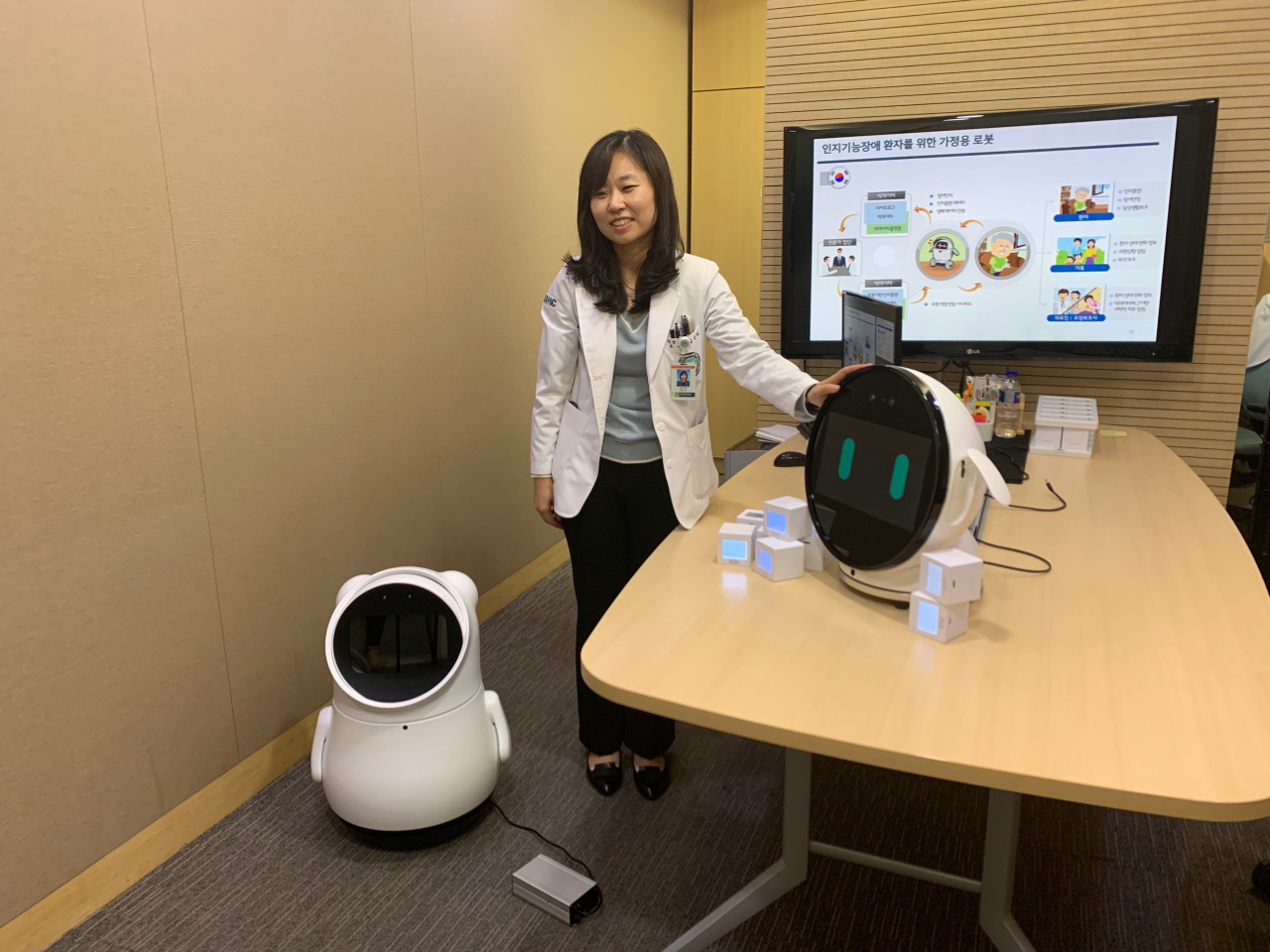 Ewha Womans University Medical Center neurologist Kim Geon-ha poses with cognitive training robot Bomy. (Kim Arin/The Korea Herald)
A wife of one of the center’s patients, who asked to be only identified by her surname Park, said for her husband, the therapy “was helpful.”

Park said her husband underwent neurosurgery at the hospital after a bleeding in his brain in March. She said the intracerebral hemorrhage hurt a part of his brain responsible for language, and he enrolled in the center’s therapy program in the later stages of the medication treatment.

“My husband is 52 years old, and he wasn’t familiar with robots,” Park said. “At first, I remember him telling me he felt awkward doing (the training activities) with the robot.”

“But I think the he feels confident and motivated by accomplishing the given tasks at each session. Sometimes, he would come out of the room beaming, which means he did well that day.”

She said her husband, who was initially assessed to be fit for level 4 training, has now moved onto level 5 and 6.

“He will be returning to work next month,” she said.

Asked if she had any suggestions, she said she wished the therapy was more affordable.

“If the national health insurance covered this therapy, since dementia care is in high demand, more patients would be able to access it.”

An upcoming addition at the center is a mobile robot designed for care services slated for use at homes by early 2021. Robocare said the robot, shaped like a penguin and about 60 meters tall, is tentatively named Bomy 2.

“Bomy 2, which is capable of locomotion, can recognize patients’ faces, keep them company, and track their location around home to remind them of their daily schedule such as when to take medications,” Kim said. “It can also inform the patient’s family or guardians in the event of an accident.”

“Robots will act as a medium between homes and clinics. They can do the day-to-day training sessions at home, and the doctor can keep track of their condition between hospital visits.”

To facilitate a seamless cognitive training experience, the center has developed an application for smartphones and tablet computers for patients to continue training at home between visits.

The care service robot project is one of government’s welfare agenda for the country where, by 2025, population aged 65 and older is projected to account for about one-fifth of the total population.

As the society ages, demand for dementia care and treatment is projected to be on the rise.

“There aren’t enough specialists to keep up with the pace of population aging. Robots will fill in the vacancy created by the gap,” said Lee Hae-kyung, an official at the National Information Society Agency under the Science and ICT ministry.

The agency launched in May a project for developing AI services in the welfare sector, including robotic care for individuals with mild dementia.

The ministry has allocated about 900 million won ($76,260) for testing care robots for elderly dementia patients this year, with the rest of the budget -- approximately 800 million won -- covered by private institutes selected for the project.

“The state project was initiated with the aim of reducing the burden of caring for dementia patients, which falls primarily on their families,” Lee said.