The four public transport unions affiliated with the Korean Confederation of Trade Unions announced Wednesday that they would start separate strikes beginning next week. 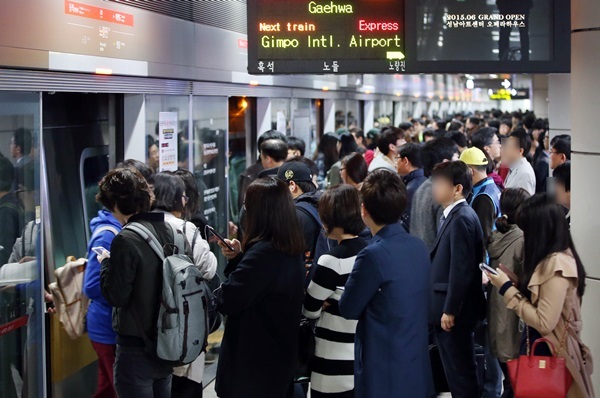 (Yonhap)
Unionized workers of Seoul Subway Line No. 9 will go on a preliminary strike on Monday with the actual strike scheduled for Tuesday and Wednesday.

The labor union of Seoul Metro, which operates Subway Lines Nos. 1 through 8, plans to hold its first strike Oct. 16-18. The group is threatening to stage an indefinite strike sometime around mid-November if its demands are not met.

Members of the labor union of Seohae Line -- which operates across the western part of Gyeonggi Province between Bucheon and Ansan -- said they will hold a lawful protest Tuesday followed by an indefinite strike starting Oct. 15.

The Korean Railway Workers’ Union, overseeing the unionized laborers of all railways around the capital area, said it is going on a preliminary strike Oct. 11-13 and will begin a general strike within the next month if its demands are not met. Prior to an all-out strike, the union will start a work-to-rule campaign on Monday.

The unions are demanding an increase in the number of workers, especially those managing safety, a stop to the contracting out of employees to private companies, improvement in the general working environment and workers’ welfare, and the consolidation of infrastructure and operation of high-speed railways.