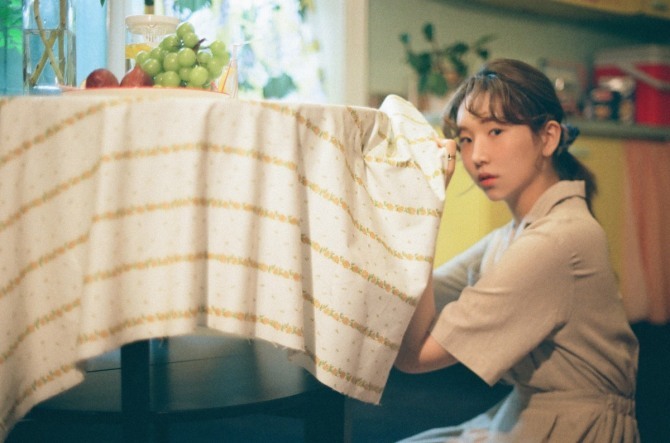 (Nextar Entertainment)
Singer Kassy is back with her second EP, “Rewind,” nearly six months after the single “True Song.”

The album, which consists of four songs and one instrumental track, keeps in line with the title as the main theme throughout the record is love.

The lead single, “Story of Night Fall,” is a fitting track for the autumn season as the song captures the loneliness that many experience after a relationship comes to an end.

“You know when it’s late at night and you can’t seem to sleep and instead are thinking about your ex. I think this song is good for those times,” the singer said at her very first press conference in her nearly four-year career.

As a whole, the EP takes you on a journey through multiple stages of being in a relationship, from having just broken up and trying to get over an ex to being madly in love.

“If you listen from track 1 to 4 or from track 4 to 1, the album presents a different story,” she said, before suggesting that people should listen to the whole album rather than to each song separately so they can enjoy the whole story.

When asked about her songwriting process, she said she is a note-taking enthusiast.

“I think I take notes. I take notes when I’m walking down the street and phrases and words spring to my mind. Even when I’m reading a book, I might write notes in the book to remember my thoughts then and there.”

With many acts debuting every year, Kassy believes it’s the honesty of the emotion that makes her work stand out.

“I know you can use techniques and singing to express yourself but I believe the most important thing when you listen to a song is being emotionally relatable.”

Having debuted with the 2015 single “In My Bed,” the former “Unpretty Rapstar” contestant -- Mnet’s competition show for female rappers -- has released one EP and multiple singles including “The Day Was Beautiful.”

The ballad from last year soared to the No. 2 spot on Melon’s monthly streaming chart in the month of March, and the videos racked up over 15 million views on YouTube.

“It was hard to believe but I was very happy,” she said, reflecting on the success that followed months after the song’s release.

Her new EP “Rewind” is out now.