[ The Korea Herald – Send E-mail ]
[Herald Interview] Four generations of family carry on Jeju’s brewing legacy
Master Kim Hee-sook sticks to centuries-old brewing-distilling techniques
By Lee Sun-young
Published : Aug 16, 2019 - 10:22
Updated : Aug 16, 2019 - 10:23
JEJU ISLAND -- In her family-run distillery in Seongeup, a small village at the foot of Hallasan on the volcanic island of Jeju, Kim Hee-sook does everything the old way.

She crafts the island’s iconic spirits omegisul and gosorisul the same way her ancestors did, using only local ingredients -- glutinous millet, barley, water and homegrown nuruk, the fermentation starter. Traditional earthenware is used for brewing, distilling and aging the liquor.

“This house used to have a straw thatched roof (like other homes in the village),” said Kim, 60, as she escorted me indoors of the Jeju Island Brewery, in the Seongeup Folk Village, a popular tourist spot that showcases the traditional lives of Jeju natives with its low-lying stone cottages and grandfather stone statues called harubang.

“Years ago, a typhoon ripped the roof off. So we decided to go for a modernized roof,” she added. 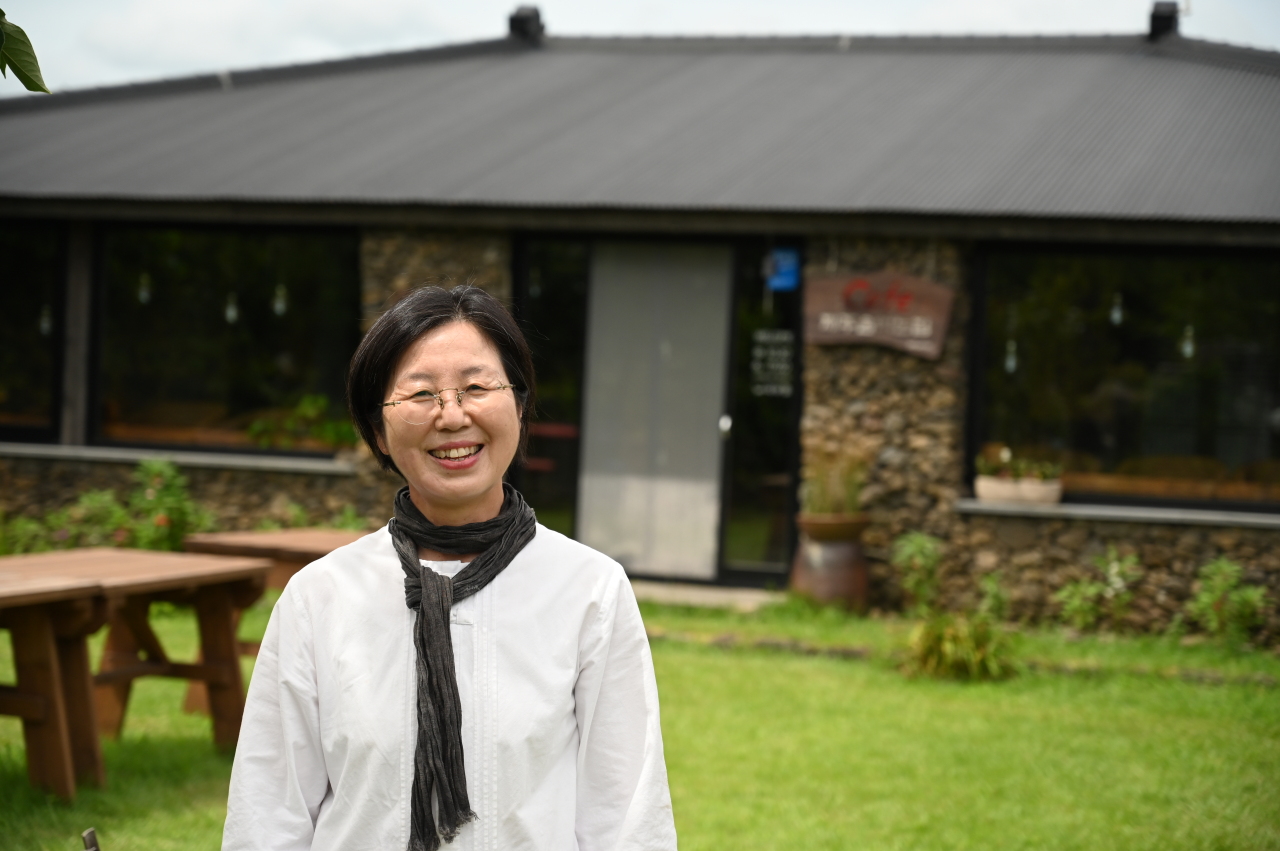 Kim Hee-sook poses for a photograph at her family-run Jeju Island Brewery in Seungeup Folk Village on Jeju Island on Aug. 9. (The Korea Herald)
Contrary to the rustic exterior, the inside is nicely air conditioned, with wooden tables and chairs and plenty of room to sit around. Many tourists visit the brewery for a tasting experience, but all Kim can offer now are nonalcoholic drinks such as an Americano or a latte. The brewery’s tasting house doubles as a cafe.

“We’ve run out of liquor at the moment,” Kim said.

Orders have surged, but there is a limit on how much she can produce while sticking to the centuries-old methods and equipment.

Designated as two of Jeju’s intangible cultural assets, omegisul is a millet liquor and gosorisul is its distilled cousin. With their distinct flavors, they have gained recognition among booze aficionados, winning the grand prize at a local liquor competition in 2017. In April this year, the brewery’s omegisul was featured as the official drink at the state dinner in Seoul for the South Korean and Chilean presidents.

“It has been part of our family’s heritage for long. We didn’t know how valuable it was at first,” Kim said. It was only in 2013 that her family acquired a license to sell liquor.

For generations, Kim’s in-laws ran a tavern in Seongeup until home distillation of liquor was banned during Japanese colonial rule (1910-1945).

“My grandmother-in-law passed her trade on to my mother-in-law, who in 1995 was recognized as the holder of the intangible cultural asset, and that’s when I started learning from her,” Kim said. 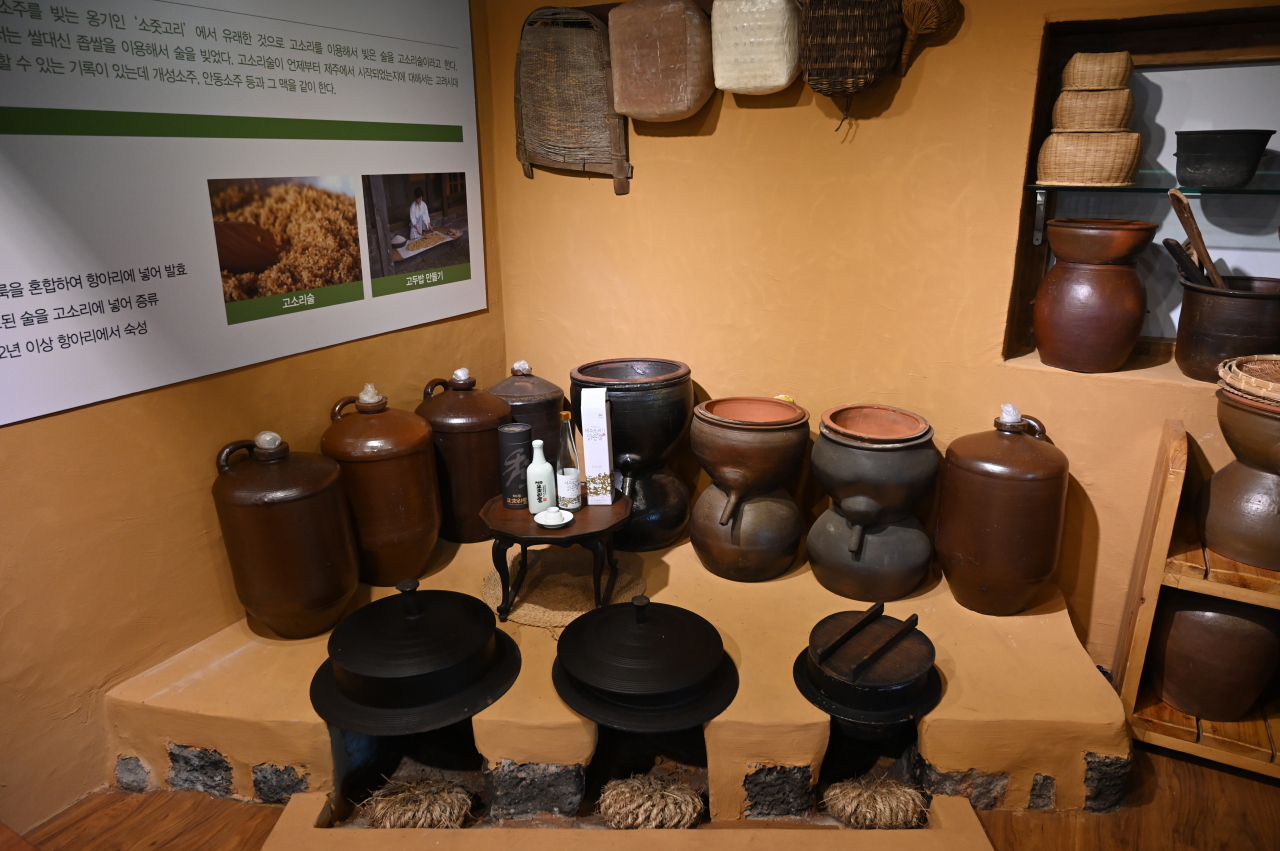 Kim Hee-sook sticks to traditional distilling methods to produce her “omegi” and “gosori” liquors, using the old-fashioned apparatus seen in this photo. (The Korea Herald)
Now Kim’s title is “transmission teaching assistant,” placing her second only to her mother-in-law.

Last year she got another title, “grand master,” from the Agriculture Ministry.

To make omegisul, one has to master making omegitteok, a doughnut-shaped glutinous millet cake, she explained. Then one has to ferment the omegitteok until it acquires that unique sweet-and-sour taste. The process takes more than a month.

Kim’s omegisul, clear as sake, has an alcohol content of 16 percent, while the soju variant, gosorisul, has 40 percent alcohol. The word “omegi” comes from a Jeju-dialect word for millet, and gosori refers to the particular kind of earthenware used for the distilling process. Sul means liquor.

The liquors are not just her family’s heritage. Home brewing was a common practice among Jeju natives, but it faded out under Japanese suppression, faded further due to rapid industrialization, and more recently declined in the face of cheap, factory-made soju and makgeolli, Kim explained.

Historically, Jeju was among three regions famed for its distilled spirit tradition, the others being Gaeseong in North Korea and Andong in North Gyeongsang Province.

“People now see Jeju as a beautiful resort island. But in the old times, the island was just a harsh, arid land, where rice couldn’t be grown,” she said.

Cut off from the mainland, locals had to be self-sufficient. Millet and barley were the two main grains cultivated there, and women in Jeju used them to brew alcohol for family consumption, she continued.

“Children in Jeju grew up with that scent of liquor from their mothers. That’s why I call omegisul and gosorisul the ‘mothers’ spirits.’”

At daytime, they toiled in the field or at sea. When they returned home, they sat in front of the furnace in the kitchen, steaming millet for hours, nodding off at times. When it was almost dawn, they would come to their children’s side finally to lie down.

“That’s when we know that Mom’s back, from that smell,” she said, adding that her own mother used to brew liquor, although it was different from the kind her in-laws make.

That emotional link is perhaps what makes her stay committed to keeping the tradition intact.

Kim’s youngest son, 32, has made up his mind to carry on the family business and is now assisting her and learning from her. 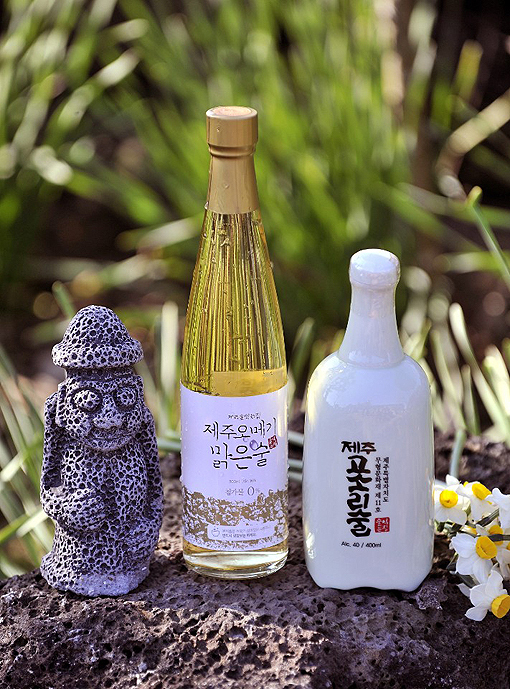 Omegisul (left) is a millet wine and gosorisul is its distilled cousin. (Jeju Island Brewery)
“Nowadays, many young people come here, wanting to learn from me. They are so passionate about traditional liquors. They are an inspiration to me,” Kim said, adding there were three young apprentices working at the distillery at the time of the interview.

Asked about her thoughts on standardization, modernization and mass production, Kim said without hesitation, “I didn’t start this to make money.”