[ The Korea Herald – Send E-mail ]
[Weekender] Flying above the water
Flyboarding, latest extreme water sport, hits Han River
By Korea Herald
Published : Aug 9, 2019 - 13:24
Updated : Aug 9, 2019 - 13:42
On a heat-soaked afternoon in Seoul, the placid waters of the Han River suddenly burst with energy. A figure mounted on top of what looks like a futuristic water-propelled jet pack performs energetic and acrobatic feats above the water -- just like the Iron Man. 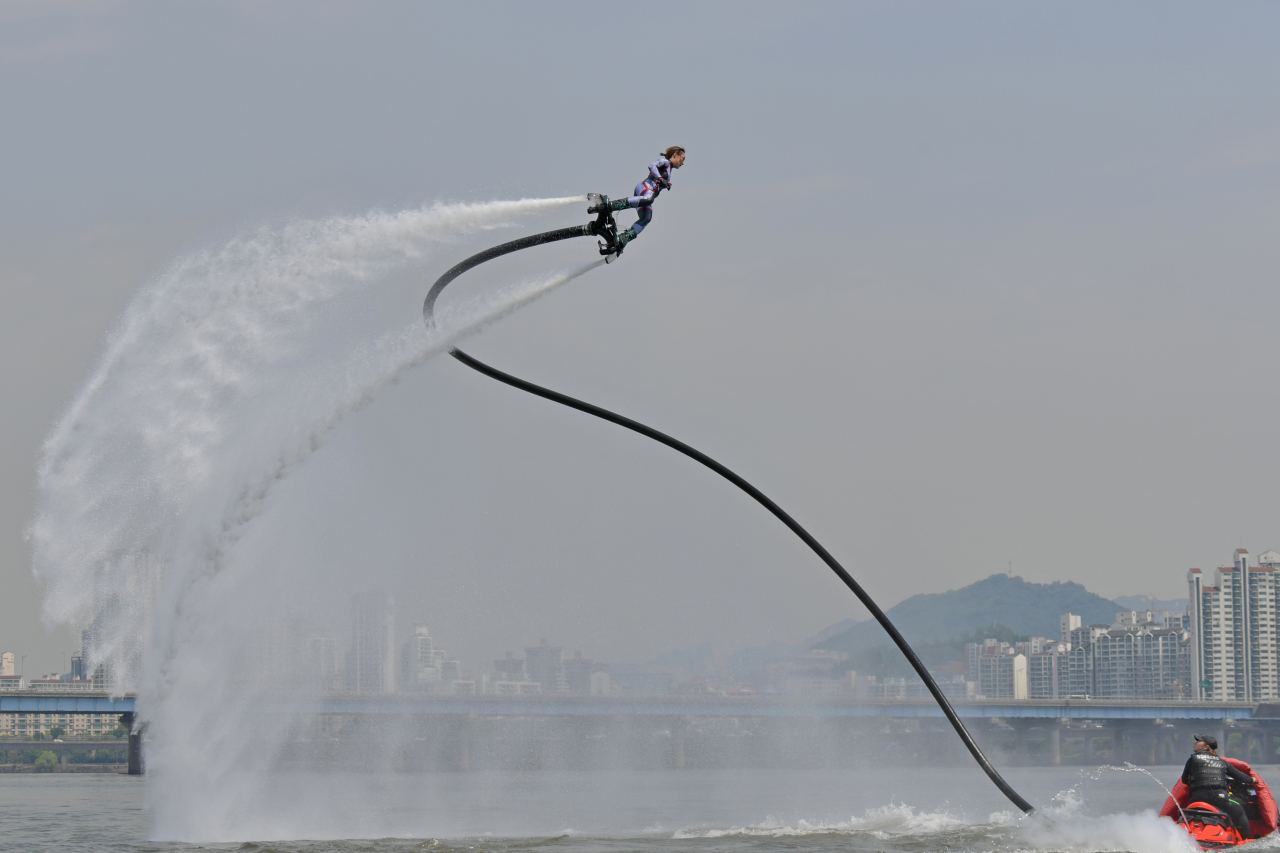 (Team JML)
This is flyboarding, the latest water sport to hit the Han River in South Korea. Perfect for thrill-loving adventurers, it is fun, exhilarating and, according to pro rider Park Jin-min, safe and easy.

“It is a misunderstanding to think that because that person on a flyboard is talented and fit, she is a great flyboarder,” said Park, the 2017 Flyboard World Championship winner. “It is a safe sport that could be enjoyed by everyone. Come experience it yourself.”

And that is exactly what we did.

We visited Hangang E-land Cruise in Yeouido Park, a hub for water activities such as motorboats, jet skis, wakeboards and banana boats and home to Park’s flyboard squad, Team JML.

Enthusiasts on flyboards were visible from afar toward the Han River, all propelled by a constant surge of powerful water beneath them.

Invented in 2012 by former French jet ski champion Franky Zapata, the new extreme sport combines a jet pack and jet ski. The jet-powered flyboard is connected by a long hose to the jet ski that provides enough thrust to push the rider high above the water.

To experience flyboarding, a fee of 60,000 won ($50) per person was needed. Long swimming pants were available to borrow for 2,000 won, contrary to the free lifejackets, helmets and towels. A small changing room with only one shower was where I changed into my swimsuit, anticipating what my near-future held with a pinch of nervousness.

Then I was told to wear boots that resembled snowboarding boots. The feeling of fear kicked in as soon as I saw the actual flyboard that was affixed to a thick hose connected to a jet ski.

Before I got fastened to the flyboard, a short training session was given by Park, who reassured, “Anyone who loves the water can successfully ride the flyboard with some practice.”

With that, I was as ready as I could be, so I buckled up on the flyboard and drifted away from the dock, ready to fly. 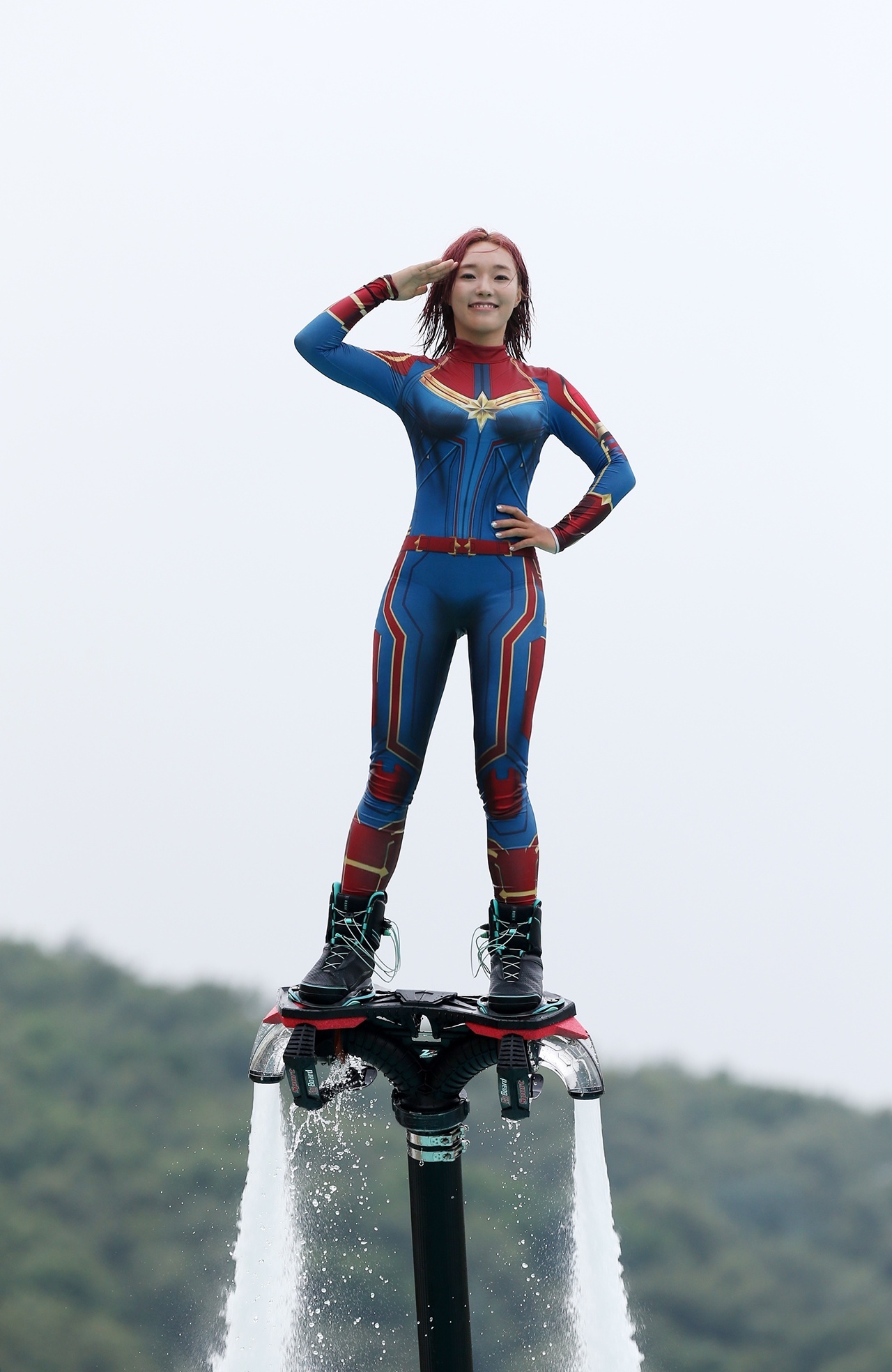 2017 Flyboard World Championship winner Park Jin-min (Team JML)
It was a lot harder than it looked. I collapsed multiple times, losing my balance above and under the water. Getting into a standing position was tricky at first, but after a couple of attempts, half of my body was out of the water. Then, finally, my whole body emerged.

With a sense of balance and building strength from my legs, it suddenly felt like flyboarding was an intuitive sport. Yet changing direction was more difficult than the simple instructions to “Point your toes down to move forward, point them up to move backwards. Lift your right knee to move to the left, and vice versa.”

Once I became comfortable with the whole concept, I was able to pick up a few tips in order to reduce the frequency of wipeouts. First, try to balance with the flyboard deck while it is beneath the water before you tell your instructor you are ready to be lifted. Second, never look down and only look forward, focusing on a faraway building.

Also, like my instructor said, “Try to not fall backwards because you only drink more water that way. Try to dive into the water with both arms above your head.”

Most importantly, “Do not be afraid of water and do not panic.”

The thought of hovering above the water was daunting at first. Soon the spine-chilling feeling changed into a sense of accomplishment, and a superhero story-like victory.

If even the thought of being elevated by a thrust of water on a board intimidates you, then just go watch flyboarding performances at waterparks or events. It is a spectacle to behold.

“As a way of advertising flyboarding to many people, since it is still an obscure sport, we have this hub for anyone to experience but also shows where I dress up and flyboard in national or waterpark events,” said the flyboarding champion.

“An advantage of flyboarding is that you get to feel like a celebrity; crowds definitely form to stare at you while you fly through the air,” Park said.