In September 1446, Sejong the Great published the document “Hunminjeongeum” -- meaning “proper sound for teaching the people” -- which describes the Korean writing system Hangeul.

The original manuscript of the book carries a preface written by the Joseon king, footnotes about the content and explanations on how Sejong created Hangeul to help commoners learn to read and write. Called “Hunminjeongeum Harye,” it is a designated national treasure and was listed in UNESCO’s Memory of the World Register in 1997.

It was believed that only one version -- named the “Andong version” or “Gansong version” -- of this manuscript existed, but another version was found in 2008, named the “Sangju version” after Sangju, North Gyeongsang Province, where it was found. 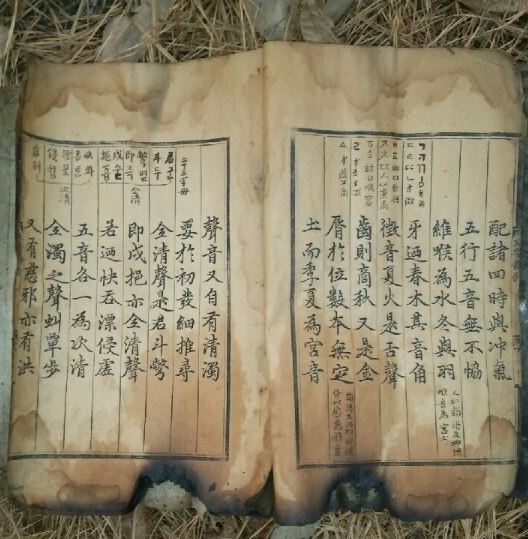 This 2017 file photo shows the Sangju version of “Hunminjeongeum Haerye” damaged in a fire. (Yonhap)
The ownership of the priceless Sangju version has been at the center of a dispute for over a decade. On Monday, the Supreme Court ruled that the court could not stop the state, which has legal ownership, from forcibly re-claiming the document from its current owner. However, the man’s adamant refusal to turn it over suggests that the dispute is not over yet.

The controversy dates back to 2008, when rare-book dealer Bae Ik-gi revealed that he has the long-lost book, saying he found it while cleaning his house. But an antique dealer surnamed Cho accused him of stealing it from his shop, filing a lawsuit in 2010 that won him ownership of the document the following year.

As Bae refused to comply, prosecutors arrested and filed a criminal suit against him in 2011. He was sentenced to 10 years in prison and incarcerated in February 2012, but he refused to reveal the whereabouts of the document.

While the ruling was overturned in September of that year due to lack of evidence that he stole it, the court maintained that Cho had ownership. Things got even more complicated in May 2012, when Cho pledged to donate the document to the state before he died in December that year.

As of now, the legal ownership has been passed from Cho to the Cultural Heritage Administration. However, Bae, who is in possession of the copy, refuses to divulge its location. Monday’s ruling by the Supreme Court gives legal grounds for the CHA to take the document.

After the ruling, the CHA said it has no plans to forcibly take the book at the moment, opting instead to try to persuade the man to give it up, preferably at a meeting scheduled for Wednesday.

“If he continues to refuse to return the book after the third time we send him an official order, we could forcibly take it. But we have to be prudent in doing so,” the CHA said. “We could also file charges against him for concealing and damaging cultural heritage.”

In March 2015, a fire at Bae’s home destroyed a page of the document and damaged others.

Bae said the Supreme Court’s ruling is meaningless, but he is yet undecided on whether to file another legal suit. Last year, he said he suggested the CHA pay him 100 billion won ($84.7 million) in compensation for the document.

He also said in 2017 that he would reveal the entire document to the public if he is elected a lawmaker, a promise that was not kept as he lost the election.

Even if the CHA decides to forcibly take the document from Bae, it is unclear if this is even possible, considering that only Bae knows where it is.

Hangeul, consisting of 14 consonants and 10 vowels, is a writing system created to provide an easier way for people to read and write. Before the invention of Hangeul, Koreans wrote in Chinese characters, which were much more difficult to learn. As a result, most commoners and even some noblemen were illiterate.

Compassion for his people is reflected in King Sejong’s preface, which goes, “Our language is different than that of Chinese and is not compatible with the Chinese characters. For this reason, even if the uneducated has something to say, so many are unable to do so. I take pity upon this and make 28 new characters (the number of consonants and vowels in the original Hangeul), so all people can learn it and use it easily.”