[ The Korea Herald – Send E-mail ]
[Exclusive] Samsung to launch out-folding smartphone ahead of Huawei: sources
By Park Ga-young
Published : Jun 27, 2019 - 16:48
Updated : Apr 22, 2020 - 15:44
Samsung Electronics plans to soon release a wide range of foldable smartphones, including one that folds outward, sources familiar with the matter told The Investor on Thursday.

They said the out-folding phone would come ahead of Huawei Technologies’ version of the foldable phone.

“The launch date has yet to be unveiled, but it’s likely to be earlier than the date set for Huawei,” said one of the sources on condition of anonymity. “Suppliers have already begun mass-producing major parts, and possibly even the phone itself.”

Huawei is expected to begin selling its out-folding phone in September at the latest, according to Vincent Pang, the company’s president for Western Europe.

The Chinese firm had earlier expected to launch the phone in summer. Pang told Techradar.com that the delay occurred because Huawei is trying to enable the 5G network on the out-folding phone.

However, analysts say the prolonged trade war between Beijing and Washington could be a bigger factor. Huawei has been struggling to hire suppliers after being placed on the “Entity List” by the US government.

“By getting ahead of Huawei and producing the first mass-produced out-folding smartphones, Samsung can claim another world title,” said one market watcher. 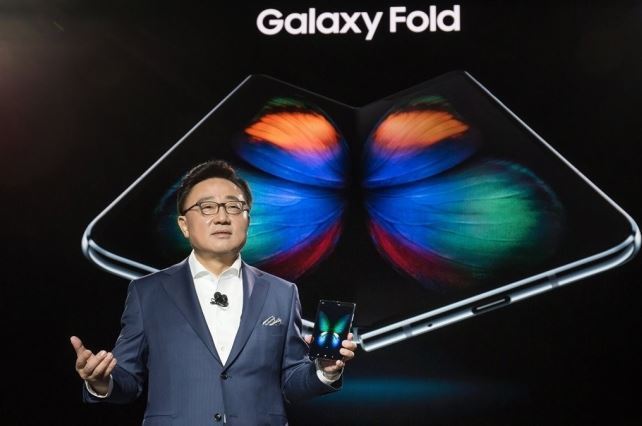 Foldable phones are the most anticipated products in the smartphone market, along with 5G phones, amid a slowdown in the overall industry. According to a report by Counterpoint Technology Market Research on June 23, global sales of premium smartphones declined 8 percent on-year in the first quarter.

Samsung had produced a prototype of an out-folding phone last year but decided to push for an in-folding device instead. It will now focus on various types of fordable phones -- both inward- and outward-folding as well as clamshell-like devices, which open and close vertically, as early as 2020, according to local media ET news on June 26.

Samsung executives have signaled that foldable smartphones will be the company’s next secret weapon. During the Samsung Investors Forum on Wednesday, Lee Jong-min, senior vice president at the mobile communications division, hinted at a varied lineup of foldable phones, adding that Samsung’s next-generation smartphones would be led by foldable devices.

“Foldable smartphones provide a whole different user experience,” Lee said. “I don’t think I could go back to the old smartphone platform.”

Another market watcher said there is no reason for Samsung not to produce out-folding phones, as it has the technology. “This will be a great chance to gauge customers’ appetite and the impact of the new phones.”

Samsung introduced its first inward-folding smartphone, the Galaxy Fold, in February this year. However, it was unable to launch as scheduled in April due to durability issues with the display.

Samsung Display recently said it was mass-producing the panels for this phone, but others argue that Samsung has decided to skip it altogether and is looking to create the next version, which could be 5G technology-equipped, as early as July.