[ The Korea Herald – Send E-mail ]
Korean astronomers discover asteroid that could potentially hit Earth
By Yonhap
Published : Jun 25, 2019 - 13:35
Updated : Jun 25, 2019 - 13:39
South Korean astronomers have discovered an asteroid that could potentially collide with Earth, although the odds are extremely low, marking the first finding of a hazardous asteroid by the country's scientists, a state-run science institute said Tuesday. 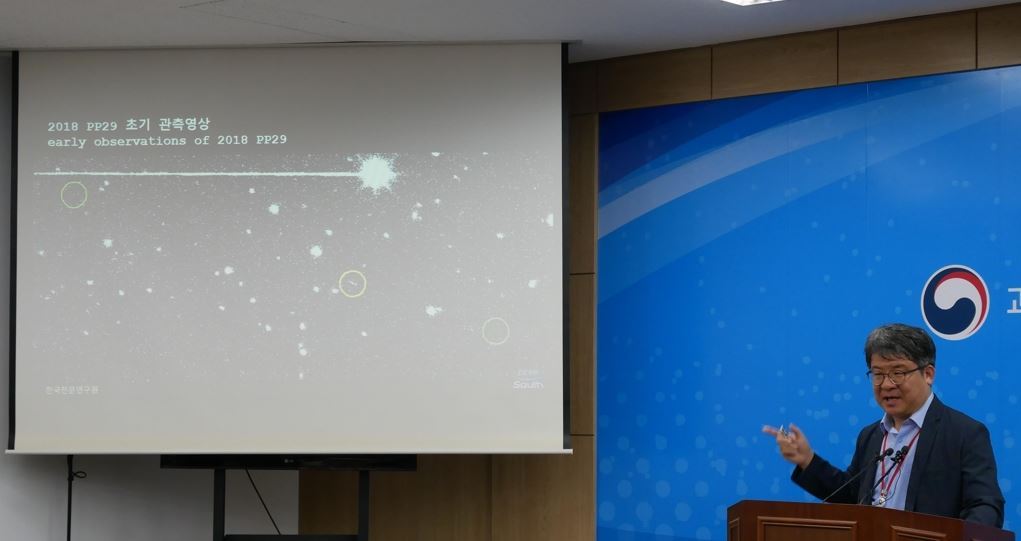 (Yonhap)
The 1.6-meter diameter telescopes in Chile, Australia and South Africa discovered PP29 after 10 days of close monitoring, with the diameter of the object estimated to be 160 meters.

The asteroid closest approach to Earth's orbit, or minimum orbit intersection distance (MOID), stands at under 4.3 million kilometers. The object has a long semi-major axis with an elongated elliptical orbit and circles the Sun every 5.7 years.

As to the possibility of PP29 colliding with the Earth, the U.S. National Aeronautics and Space Administration estimated it could happen in 2063 and 2069, although the probability is extremely low at 2.8 billion to 1.

"This discovery is important because most PHA detections have been made by the United States and shows the potential of South Korea to play a greater row in space monitoring," said Moon Hong-kyu, a research scientist at the space institute.

All space objects that are more than 140 meters across and come within the 7.5 million kilometer MOID are viewed as PHA, requiring close and constant monitoring, with a total of 1981 objects discovered so far.

Local scientists have also discovered a smaller Near Earth Asteroid (NEA) called the 2018 PM28 after 44 days of observation.

This asteroid is estimated to have a diameter of 20-40 meters. (Yonhap)