That is the opening line in the latest picture book of beloved children’s book writer and illustrator Baek Hee-na, released in mid-April.

A tale of a not-so-special, stay-at-home dog whose life is pretty much all about waiting for the two-legged housemates to return and take it for a walk, “I Am a Dog” is a typical Baek book: witty, fun-to-read and visually enthralling. And as in her previous books, it does not fail to give readers that warm feeling in their hearts. 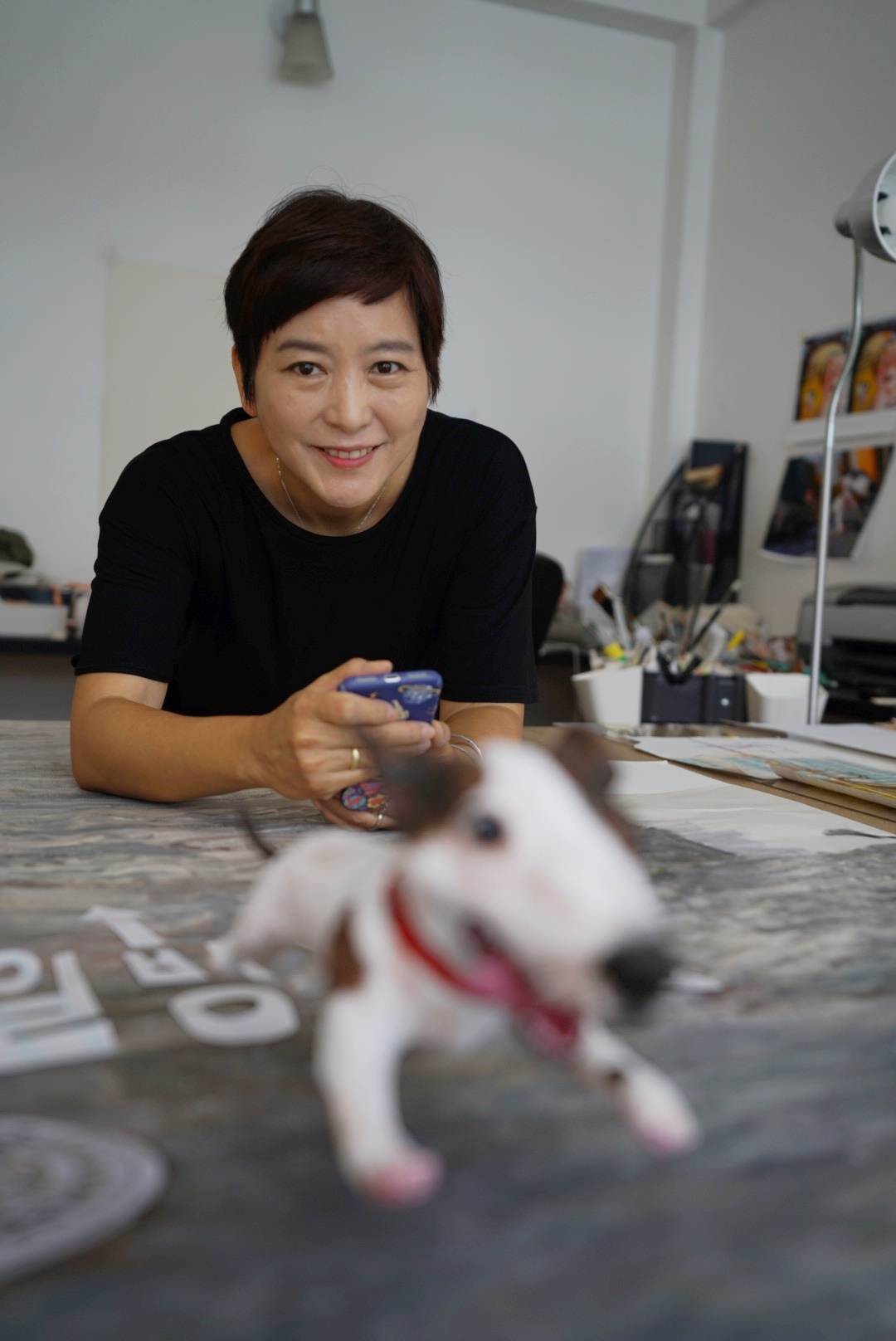 Baek Hee-na, author and illustrator of "Magic Candies" and "Cloud Bread," with the main character of her latest book "I Am a Dog." (Photo provided by the author)
“The most difficult part was to think from a dog’s point of view” Baek, 47, said in an interview. Building a dog’s character that is wholesome and consistent, both in the narrative and visuals, was harder than imagined, she explained.

The result, however, is a brilliant story of a pet dog told through the voice of that dog -- like on why it cannot help but respond to another dog howling, or the dog’s bewilderment at how a boy at 5 years old still stumbles around. 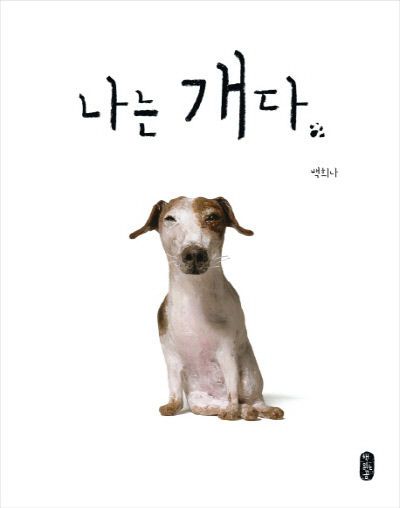 Cover of "I Am a Dog"
On howling, Guseul’s narrative goes like this: Since it was born to a very productive mother who gave birth to many puppies each year, there is a high chance that many neighborhood dogs are its siblings. So it has to say hello to them by howling, “because we might be family.”

Baek, a dog lover herself, has cared for three pet dogs in her lifetime. The characters of Guseul and its mother are all drawn from her own memories of them, with the book acting as a tribute.

Thinking about a companion dog’s life has helped her through hard times in an unexpected way.

“In January last year, the lower court’s decision came out, which was devastating to me. I still don’t have rights over my debut book ‘Cloud Bread,’” Baek said, referring to her much-publicized legal battle with the publisher of her 2004 work.

Outside the world of picture books, she is best known as the victim of an unfair publishing contract, having received just 18.5 million won ($15,600) for her maiden work. The book proved to be a phenomenal success, churning out a major money-rolling franchise of an open-run musical production, TV animation and even actual “cloud bread” at one bakery chain. Local media estimated the value of that franchise to be worth 440 billion won.
The court found Baek’s contract with the publishing house to be valid and nixed her request for the return of the copyright.

The fight, she has often said, was one she could not give up for the sake of all writers who, before they make a name for themselves, are often subject to unfair treatment at the hands of the publishing industry.

However, the loss dealt a blow on a personal level. On Twitter, she confessed to having been deeply affected, to the point of questioning why she toils so much to put out a book.

“The way Guseul accepts his life as it is and gives unconditional love to his companions made me carry on with my work through the rough patches,” she said, adding she hopes her book does the same for readers.

Visualization is an important part of her storytelling.

For “I Am a Dog,” she chose a creative process similar to the making of a Claymation movie, seen in her recent publications such as “Magic Candies,” “The Strange Visitor,” “The Bath Fairy” and “The Strange Mum.”

First she has a storyboard with rough sketches of the scenes. She creates sculptures of each character with wires, cooking foil and clay, adds color and dresses them. She then arranges them in a miniature set made of every material imaginable. With light effects, she photographs them as many as hundreds of times until she gets the perfect shot. Every scene goes through the same tedious and labor-intensive process. In total, the visualization process of a book requires seven to eight months on average. 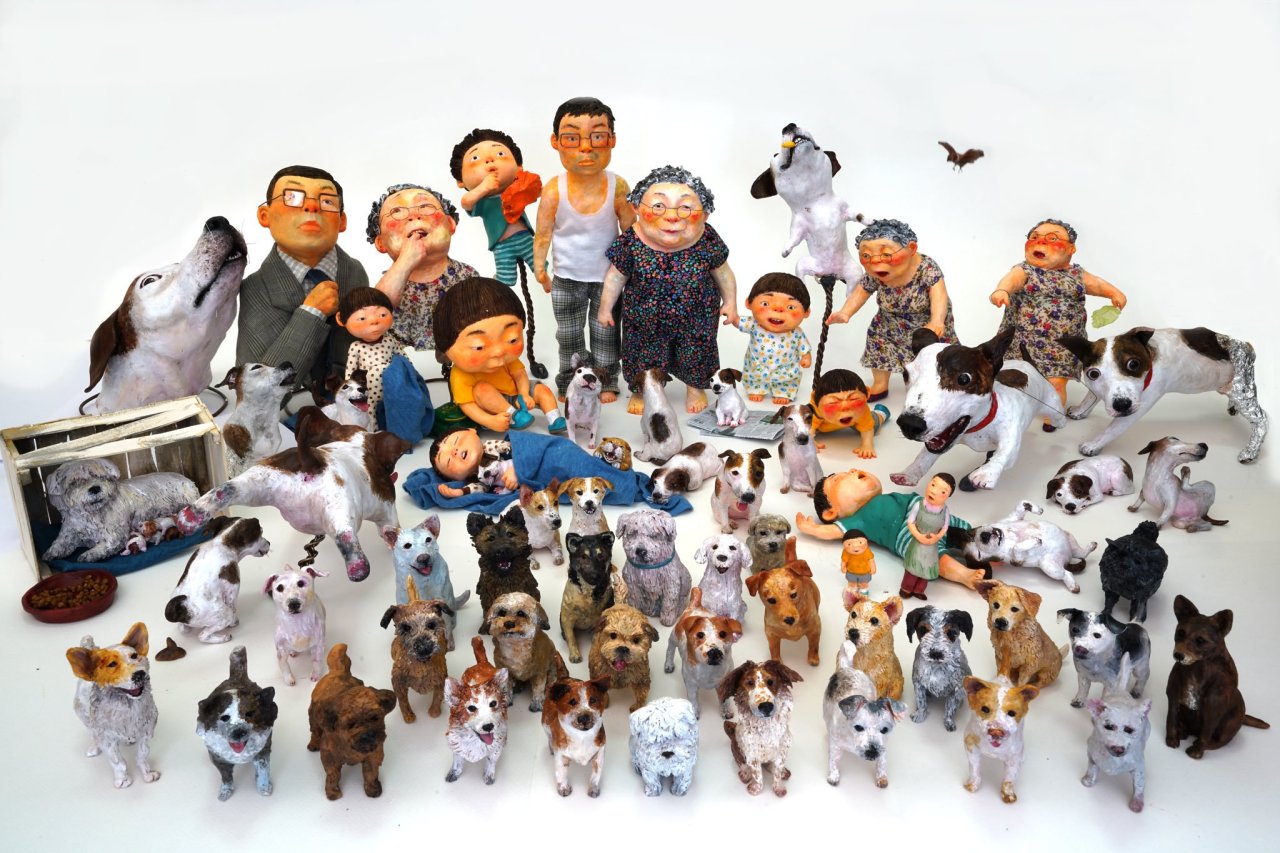 Using clay, wires and every material imaginable, Baek Hee-na creates miniatures of characters and props and photographs them for a scene in her book. Seen in the photo is an assembly of living characters created by Baek for “I Am a Dog.” (Photo provided by the author)
Still, it is a labor of love.

“There is this moment, which I can only describe as being magical, when everything is just right, the sculptures come to life and become living characters with all emotions,” she explained. “I feel a sense of catharsis.” 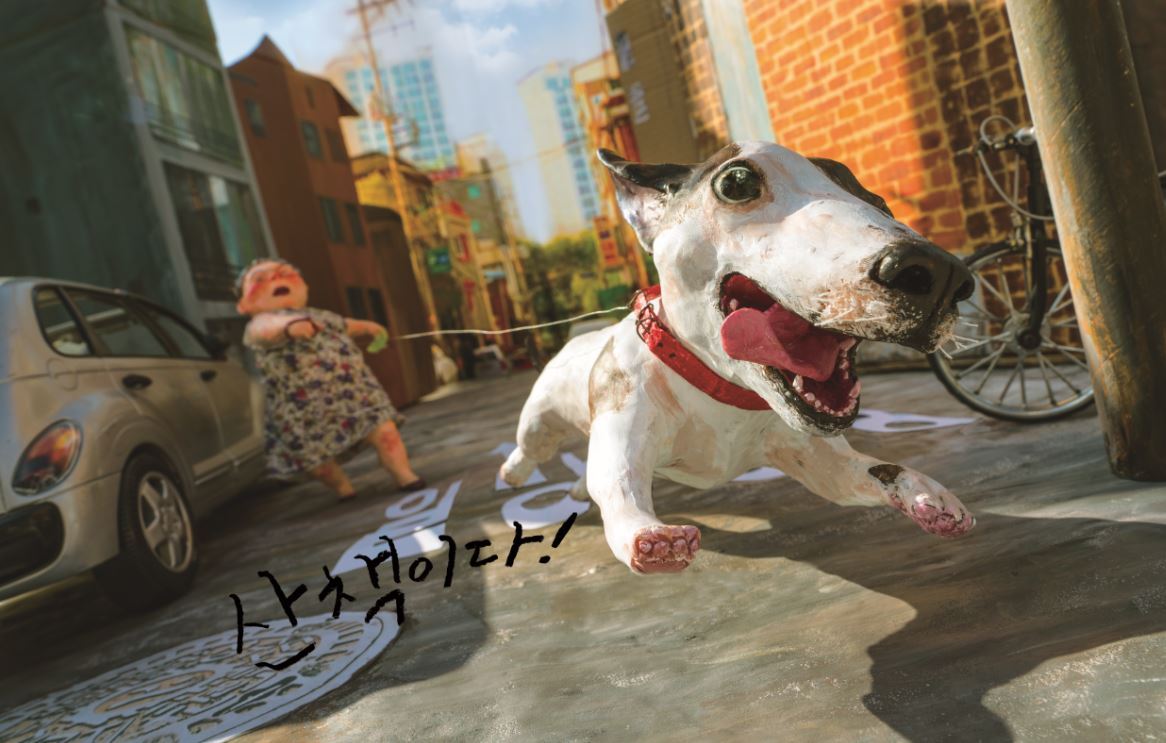 A scene from "I Am a Dog" (Bear Book)
Growing up, Baek loved to draw and play with dolls. “It’s a job borne out of a lifelong hobby,” she said.

Although she has dealt with clay sculptures often recently, Baek avoids confining her style to a certain type. In her earlier works, she sometimes just drew, cut out paper or made stuffed dolls.

“It depends on the story I want to tell. I look for the best way to illustrate the story,” she explained.

For her, the baseline is that she wants to enjoy the process of making a book.

“Only then, the outcome is enjoyable for readers.”

Baek studied educational technology at Ewha Womans University and animation at the California Institute of the Arts in the US. Her first book “Cloud Bread” was an instant best-seller upon its release in 2004, bringing her fame and recognition. She was named illustrator of the year at the Bologna Children’s Literature Award in 2005 for the book.

Her most popular offering other than “Cloud Bread” is “Magic Candies,” released in 2017. It has sold over 170,000 copies here. The book received rave reviews from both readers and publishers in Japan, winning her a series of awards.

“I Am a Dog” is a prequel to “Magic Candies,” which tells the touching story of a lonely boy who with the help of magic candies hears the unspoken voices of a sofa, pet dog Guseul and others.