The 2019-2025 plan approved by the National Space Committee calls for the private sector, with the support of the government, to place locally built, high performance satellites weighing around 500 kilograms into Earth's orbit, according to the Ministry of Science and ICT. 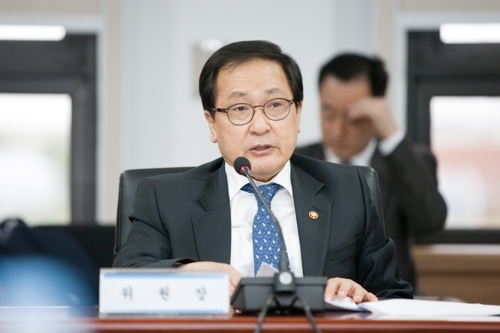 (Ministry of Science and ICT)
"Unlike past satellite projects, the latest endeavor calls for private industry to take the leading role, with the government and state agencies like the Korea Aerospace Research Institute to provide support and assist in quality control and reliability," the ministry said.

The first of the satellites, to be built at a cost of 117 billion won and used mainly by the Rural Development Administration and the Korea Forest Service, is set to launch in 2023.

The satellite will come with a camera with a very wide field of view of 120 kilometers that can resolve images as small as 5 meters across, it said.

Its main mission will be to check the country's harvest and keep tabs on irrigation water and forests, the ministry said.

Work on the second satellite, which will receive 47 billion won and be employed for space observation, will begin in 2021 and be completed by late 2023.

This orbital unit will be used to support cosmic research and allow engineers to check and verify the country's ability to develop various space vehicles going forward. It will be placed in orbit on a Korean space launch vehicle, while the other two satellites could use either foreign or domestically built rockets.

The last of the satellites to be operated for environmental monitoring will also be used to assist the country deal with disasters like drought, floods, ocean oil spills and red tide.

This satellite will be equipped with a C-band imaging radar with a resolution of 10 meters and is expected to cost 143 billion won. Full-fledged development will start in 2022 and run through 2025.

The science ministry said the latest project is not only expected to greatly enhance the country's scientific knowledge but make it possible to better manage its resources and respond more effectively to emergency situations. It said by getting the private sector to participate, the program will allow private developers to build up critical knowhow in satellites that could contribute to their overall competitiveness in this cutting-edge field. (Yonhap)