South Korean President Moon Jae-in said Thursday that the summit between North Korea and Russia is expected to be helpful to a regional peace process.

Meeting here with a top aide to President Vladimir Putin, Moon also appreciated Putin's efforts for a political and diplomatic resolution to the Korean Peninsula issue, according to his office, Cheong Wa Dae. 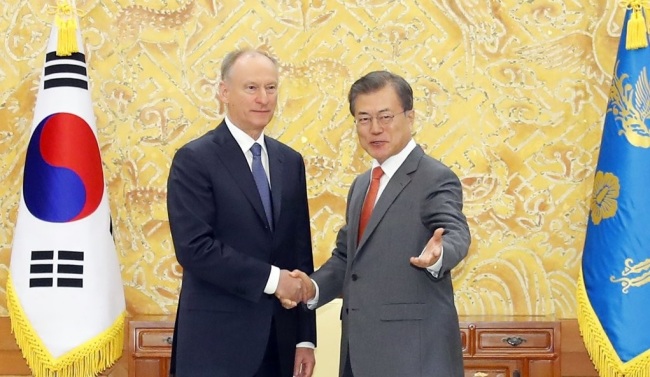 Moon expected it to "contribute constructively to the complete denuclearization of the Korean Peninsula and the establishment of permanent peace," Cheong Wa Dae said in a press briefing.

He voiced a desire for the Putin-Kim talks to serve as a "foundation for the resumption of North Korea-US negotiations and the acceleration of the Korean Peninsula denuclearization process," it added.

He also expressed hope that he could with Putin on the occasion of the G-20 summit to take place in Osaka, Japan, in late June.

In response, Patrushev said his government would brief Seoul on the results of the Vladivostok summit as soon as possible.

They agreed that it's important for relevant parties to work together to maintain the momentum of denuclearization talks.

Cheong Wa Dae did not provide other details, including whether the two sides touched on the issue of six-party talks on North Korea's nuclear program that were last held in 2008. (Yonhap)