[ The Korea Herald – Send E-mail ]
[Weekender] Night market gets glam makeover in Yeouido
Seoul’s Bamdokkaebi weekend night markets to run till October at five locations
By Kim Arin
Published : Apr 26, 2019 - 09:15
Updated : Apr 26, 2019 - 10:08
Seoul’s Bamdokkaebi Night Market, which runs every Friday and Saturday at four locations in the city, is perfect for those who want a casual night out.

At Cheonggye Stream, Dongdaemun Design Plaza, Banpo and Yeouido, the city-operated weekend markets beckon visitors with their eclectic selection of food stalls, music and atmosphere -- their own glammed-up versions of the Korean traditional street market. From May onward, a fifth location will be added -- Oil Tank Culture Park in Mapo-gu. 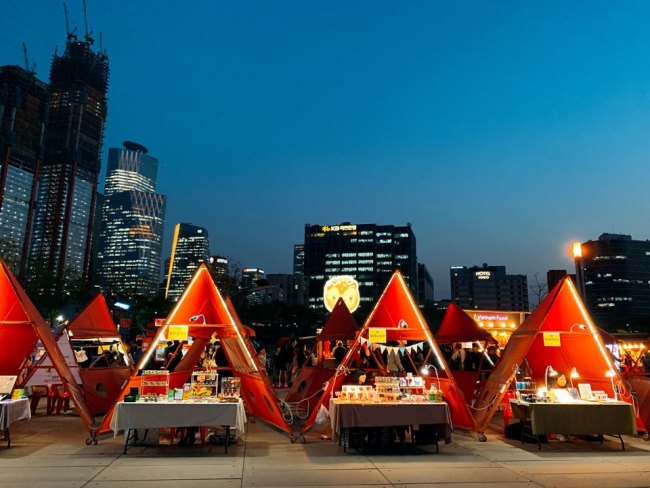 Bamdokkaebi Night Market in Yeouido (Kim Arin/The Korea Herald)
Yeouido, already a seasoned party host with its cherry blossom festival every spring and its fireworks festival every fall, is charming visitors and locals like no other.

“Everything is so orderly and clean,” said Bianca Licup from the Philippine city Pasig. She was impressed with the cleanliness of the market venue considering the large crowds.

Organized by the Seoul Metropolitan Government, the whole affair is safety-conscious and eco-friendly. “There are separate bins for sorting waste, and staff make the rounds every half hour to make sure there’s no littering,” the organizer told The Korea Herald.

“We decided we were going to Yeouido anyway, and found out this night market thing was going on,” said Licup, who was visiting with her sister Maika. “We almost regret having dinner before coming here. The food choices are so diverse.” 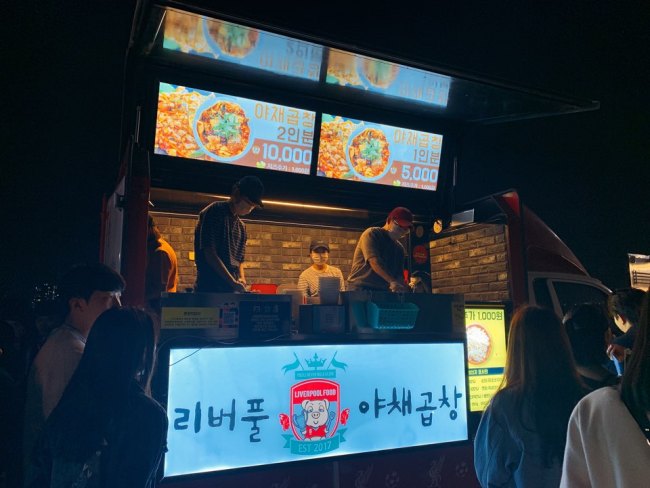 (Kim Arin/The Korea Herald)
Liverpool Gopchang -- a football-themed food truck named after the Liverpool team -- is one example, rendering a classic dish with a bit of a street touch. “Gopchang (grilled beef tripe) is usually considered a full meal rather than a snack. We wanted to turn it into a snackable food,” said Kim Kyung-suk, the manager.

“I love that night markets have a feast-like ambience,” Kim said. “Also, you get to bond with your customers, which is always fun. We have a lot of Liverpool fans coming to visit.” 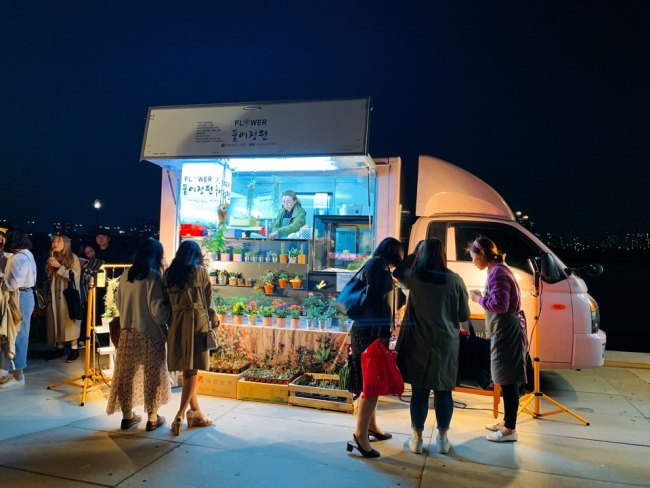 (Kim Arin/The Korea Herald)
And it’s not just food. There are stalls for caricatures, flowers, pet supplies and handicrafts such as scented candles and carved wooden stamps. Florist and “planterior” designer Lee Eun-jeong said visitors are delighted to see her flower truck at the market. “Flowers are festive. And customers are pleasantly surprised to find a flower truck among all the food trucks.”

The vendor tents and food trucks are also “aesthetically pleasing,” said Licup. “I just love the vibes here. We took a lot of photos.”

Hannah Crew and Kirsty Hodge from Wales, who were waiting in line for pad thai, couldn’t have been more enthused. “I wish we had something like this back in the UK,” they said. “Everything closes at 6 o’clock there.”

Alan M. from the US state of Virginia said he had visited Yeouido Park before and had known he was going to like the area. “Yeouido is very fun. I like being by the river and I think the idea of having something like this on Friday and Saturday nights is very neat,” he said. “Plus, we’re used to the food trucks in Virginia.”

Jung Jae-rim, Lee Sung-ju and Choi Sun-young, who all work in Yeouido, said it was their second visit to the market. “It’s got an amazing view, good food and music,” said Jung, sitting with her friends on the lawn in view of the stage. “Besides, there’re no shortage of things to try in Yeouido.”

The night market in Yeouido runs 6-11 p.m. every Friday and Saturday at the Han River Park.

For information on other Bamdokkaebi night markets, visit www.bamdokkaebi.org or www.facebook.com/bamdokkaebi. 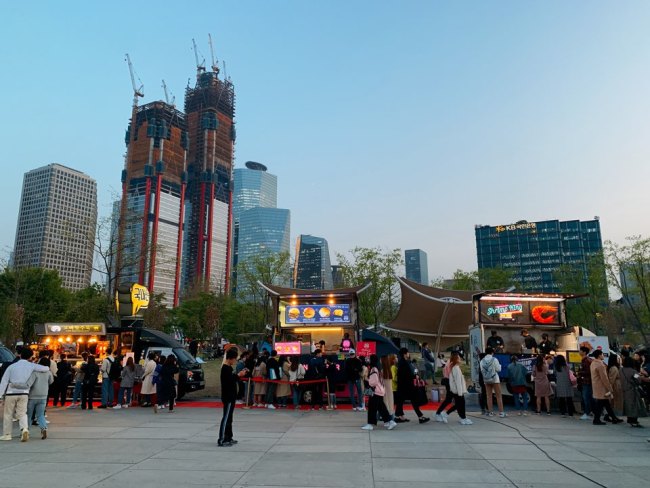 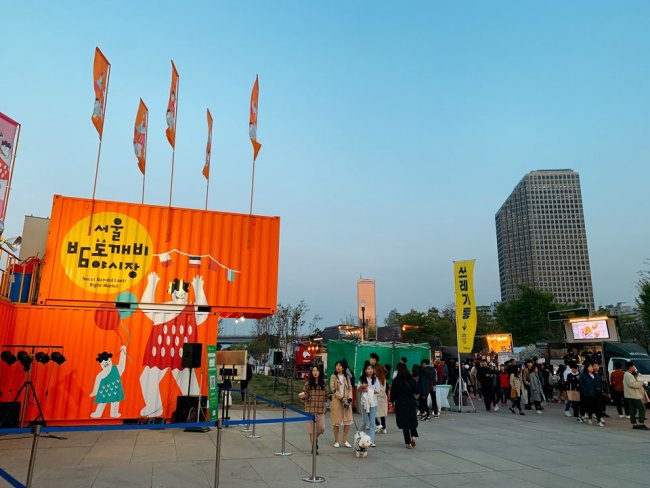 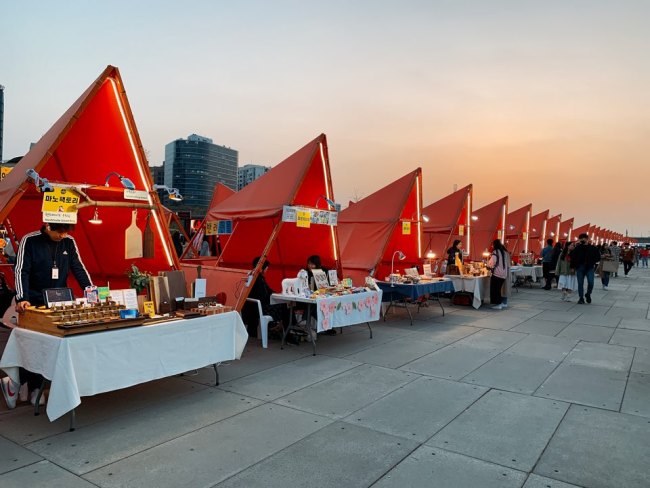 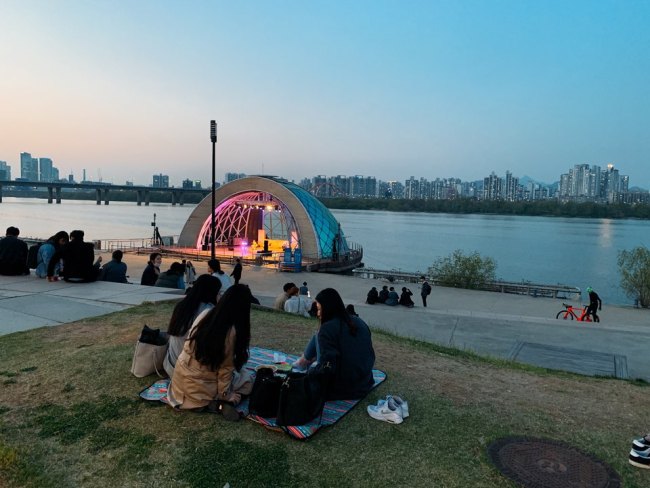