"The Story of Hong Gil-dong," the first Chinese-character version that has been ever found, is different from the novel of the same name written in the Korean language, whose authorship is generally attributed to Heo Gyun (1569-1618), a radical intellectual. 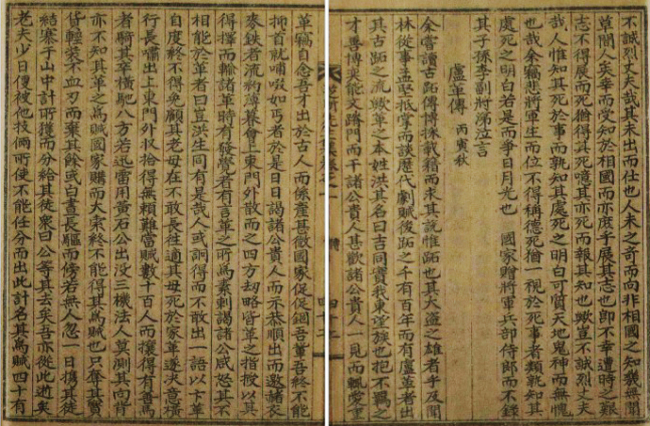 (Yonhap)
Lee Yoon-suk, a former Korean literary professor at Seoul's Yonsei University, said he found the novel, titled "Roh Hyeok jeon," in the collection of Hwang Il-ho (1588-1641), which was published by a descendant of Hwang in 1937.

According to Lee, Hwang wrote "Roh Hyeok jeon," or "Autobiography of Roh Hyeok," in 1626 when he worked as a justice in the southwestern town of Jeonju.

In the beginning of the novel, which uses about 750 Chinese characters, Hwang reveals that Roh's original family and given names are Hong and Gil-dong and that he was born to a renowned family and had excellent abilities, including a talent for writing.

As in the Korean-language novel, Hong Gil-dong is a bandit leader and his mother is a lowborn concubine.

In the novel, Hong keeps company with noble people in the daytime but steals from rich and corrupt aristocrats at night.

After the death of his mother, he steals precious things from many places nationwide, and the government sets a prize for his arrest but fails to apprehend him.

After forty years of stealing, Hong suddenly proclaims, "A man should make a change just like a cicada sheds skin. I will be a new man from now on," and disbands the group of bandits. Later he marries a woman before dying a natural death.

Lee said the novel intertwines reality and fiction and is likely an amalgam of stories related to a bandit named Hong Gil-dong of the Joseon Dynasty.

The Annals of the Joseon Dynasty, known as "Joseon Wangjo Sillok" in Korean, show that in 1500, courtiers of King Yeonsan celebrated after learning of Hong's arrest.

Lee also contradicted the commonly recognized theory that Heo Gyun authored the Korean-language novel, whose original version has yet to be found.

"'The Story of Hong Gil-dong' in the Korean language is believed to have been authored by an anonymous writer around 1800.

It is based on Hong Gil-dong-related stories that passed down in society," Lee said.

The acts of theft by the main character have led to comparisons to famous bandits like the English folk hero Robin Hood and Australia's Ned Kelly. (Yonhap)