Senior officials of the $2.7 billion US firm proudly introduce Xilinx as the “inventor of the FPGA,” the highly flexible silicon integrated circuits that can be programmed after the manufacturing stage.

“The reason why we call Xilinx the inventor is that the company makes what hasn’t existed before,” said David Ahn, head of Xilinx Korea. “Xilinx is a relatively small company with about $2.7 billion in sales in the vast non-memory market, but it expands its pie in the market by pioneering into new areas and creates new markets.” 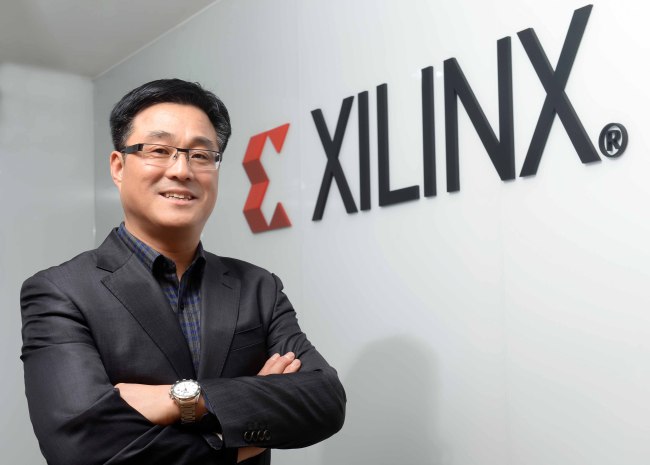 David Ahn, head of Xilinx Korea, poses during an interview with The Korea Herald. (Xilinx Korea)
At the time, there was no such thing as a fabless company -- that is, a chipmaker without a fabrication line. In came Xilinx and designed an integrated circuit that could be reprogrammed to suit different applications and functionality requirements.

To make it possible to manufacture the FPGAs in mass numbers, the contract-based commissioned production of chips -- now known as the foundry concept -- came into existence too, according to Ahn.

Taking the latest Xilinx products as an example, Ahn elaborated on the firm’s strategy for expanding its pie in the market.

As their name suggests, Xilinx’s flagship system chips are reprogrammable for various applications. And the company is seeking further technological improvements that would make its chips even more versatile. The company first developed reprogrammable hardware chips, then went on to develop related software. Now it is building a whole new platform that can support a variety of applications by offering adaptive software and chips together.

“First we built the programmable chips, then we did all programmable hardware and software,” he said. “Now we have come up with an adaptive compute acceleration platform, ACAP -- branded as the 7-nanometer Versal -- that will cover all its predecessors.

“Seeking to grow your business by trying to sell everything you have brings you very limited growth,” he said. “The only answer is to create a whole new market category.”

Ahn, a semiconductor expert who specializes in the South Korean market, has led Xilinx’s Korean operations for more than a decade.

For Ahn, the new era of the 5G telecommunications network presents business opportunities for him as a Korean national but also for his company, which until recently had difficulty overcoming its obscurity in the Korean market.

The US firm gained attention last year by announcing a deal to supply FPGAs to SK Telecom for its artificial intelligence data center. And recently, Samsung Electronics made public its plans to adopt Xilinx’s ACAP for the development of its 5G solutions.

“Samsung’s recent decision to adopt the ACAP is interpreted by other competitors as an intention to go ahead of others in the new 5G era,” said Ahn.

Regarding the latest moves by Korea to shift its focus from the memory market to the non-memory market, Ahn emphasized the country’s fundamental foundation for science and its environment for nurturing scientific capabilities.

“There is a widespread tendency that overlooks the value of science running deep across the country,” he said. “Engineers at Korean companies face limitations in developing their careers solely in engineering. As they become senior engineers, they get to manage projects or take control of junior engineers rather than continuing their research and development.”

This unfriendly environment for engineers leads aspiring Korean engineers to study abroad and shun their own country as a place to realize their aspirations, he said.

“Korea needs to learn from China to achieve success in the non-memory market,” Ahn said. “Chinese companies get more engineering talent every year by offering enticing perks and benefits.”