[ The Korea Herald – Send E-mail ]
[Weekender] Eat your namul, for your health and the Earth’s
By Lee Sun-young
Published : Apr 12, 2019 - 09:49
Updated : Apr 12, 2019 - 10:26
Plant-based eating is emerging as a healthier and more sustainable alternative amid repeated global warnings about climate change.

For most South Koreans, however, the concept is pretty familiar.

Despite recent Western influences, for centuries Koreans have been a plant-loving people.

“We are indeed a namul people,” said food and nutrition professor Jung Hye-kyung of Hoseo University, referring to edible wild plants and the important role they have played in the Korean diet throughout history.

The weighty presence of namul in the diets of Koreans can be attributed to a combination of factors, she explained -- geographical, environmental and even religious.

Korea is 70 percent hills and mountains, where wild herbs grow in abundance. Harsh winters meant famine was a recurring event, and young spring sprouts were a crucial source of food. Last but not least, Buddhism had a strong influence on the country -- a religion that emphasizes nonviolence, including efforts to avoid harming animals.

A typical Korean meal includes a bowl of rice with soup and several side dishes, which are often made from namul. 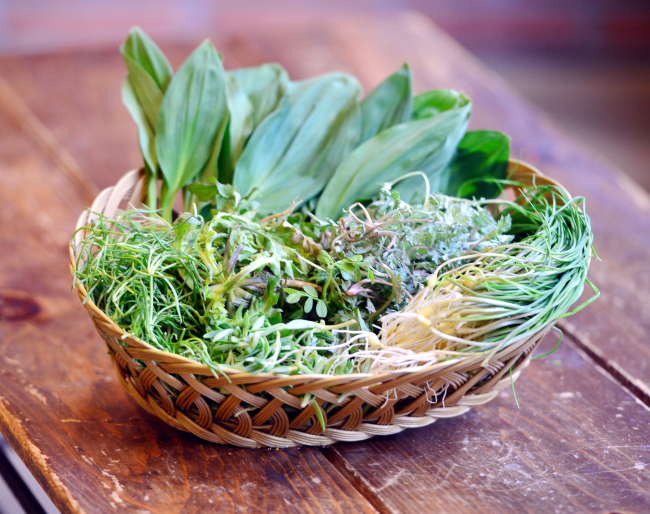 (Yonhap)
But in modern-day Korea, where food is no longer scarce, namul eating is slowly losing ground, experts and food industry insiders say.

Lee So-young, who has been selling traditional Korean side dishes at Hyundai Department Store for 21 years, can attest to this.

“Young people shun cooking namul at home, thinking of it as something difficult and complicated to prepare,” she said.

Kim Jeong-yeon, 22, confessed that namul is her least favorite of all the dishes her mother cooks for her.

“I can’t tell which one is which, particularly those weedy-looking ones that come out around spring,” she said.

For this reason, the wild greens that do land on local dinner tables are becoming less and less varied, according to culinary researchers at the local sauce maker Sempio Foods.

“Despite being a key feature of the traditional Korean diet, namul consumption is dropping and the variety shrinking,” write the researchers from Sempio Culinary Research in a recent report summarizing the results of a two-year study on 15 Korean spring greens. In the report, the company suggests some simple namul recipes and cooking tips.

For Jung, the food and nutrition professor, upholding the country’s namul-rich culinary heritage is in sync with the global trend.

“Around the world, people are talking about the problems of meat overconsumption and how (plant-based food) is the food of the future that will save the planet. I say we have the answer -- namul,” she said.