Led by the duo of Ben Cottrell and Matthew Dainty, Cottweiler was chosen as the first British brand to stage a runway show at Seoul Fashion Week under an exchange program between the British Fashion Council and Seoul Design Foundation. 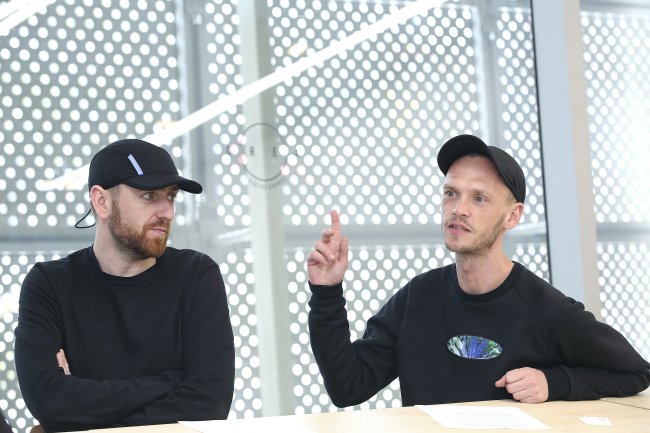 Designers Ben Cottrell (left) and Matthew Dainty, who run London-based menswear label Cottweiler, speak during an interview with The Korea Herald at Dongdaemun Design Plaza in central Seoul on Thursday. (Seoul Design Foundation)
On Thursday, a day before the show, The Korea Herald met with the two designers for an interview at Dongdaemun Design Plaza.

“I think we have a quite broad customer (range),” Dainty said, asked why he thinks Cottweiler was chosen as the first brand for the program.

“The message of the brand has been passed around here through social media. Also, having seen how people dress, the way we design definitely fits into that aesthetic. (The brand) is about kind of crossing the boundaries of casualwear, streetwear and tailoring,” he said.

On Friday, Cottweiler re-presented its fall-winter collection, having previously shown at London Fashion Week Men’s in early January. Under the title “The Lost Art of Cruising,” the collection depicted how technology has affected interaction between people.

“It was about how things were before we had apps ... when you could meet people and we could talk to people -- what we have lost through that and gained through that,” Dainty said.

“So a lot of the creations are inspired by our childhoods, garments specifically designed to challenge masculine dress codes and traditional ideas.”

Although a tailored track suit is the signature piece of the brand founded in 2012, the 20-piece collection presented in Seoul was so much more. 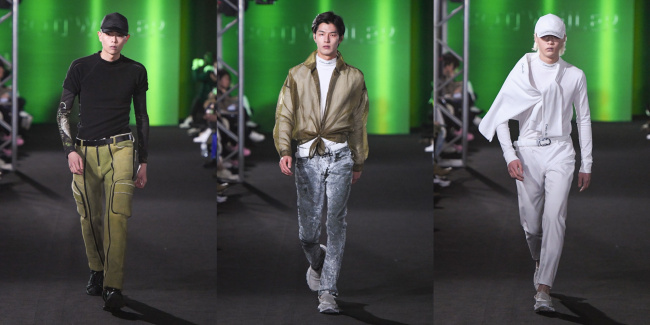 Models present creations by Cottweiler on a catwalk at the 2019 fall-winter Seoul Fashion Week on Friday. (Seoul Design Foundation) 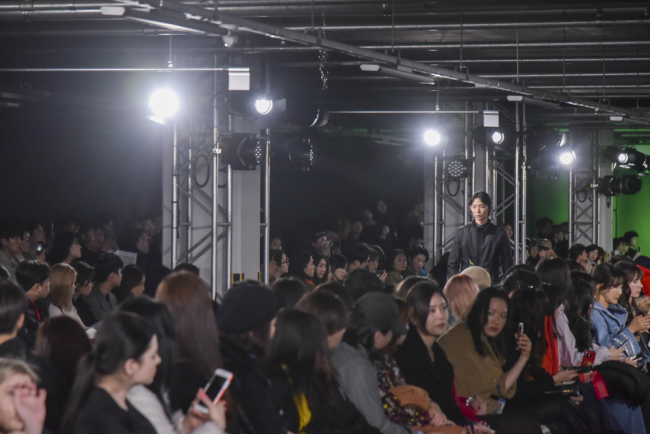 Models present creations by Cottweiler on a catwalk at the 2019 fall-winter Seoul Fashion Week on Friday. (Seoul Design Foundation)
Sportswear-influenced pieces, polo shirts, sweatshirts and even raincoats created in collaboration with Italian clothing brand Allegri were shown. These were imbued with a strong sci-fi, futuristic mood.

With silhouettes with minimal details, the designer duo played with diversity in fabrics, using innovative textiles they had developed, such as mohair appliques and natural wool insulation. The dark-shaded collection emphasized moss green, the on-trend color for the upcoming fall and winter.

While the London catwalk occupied a venue 12 stories underground -- “the deepest place in London” according to Cottrell -- the Seoul venue could not be that deep. The overall atmosphere, however, was similar, as the show took place in a parking structure three stories under DDP.

“The venue is a lot simpler than what we are used to. But it means that the clothes can speak for themselves,” Dainty said.

“It has been great. The casting was very interesting. The models -- we kind of knew what to expect -- but when we have actually seen the boys in real life, they were so much stronger,” Cottrell said.

The designers explained that the brand has been carefully eyeing the Asian market, with around 50 percent of its sales coming from Asia. For Cottweiler, the Asian market -- including China, Japan and Korea -- is its fastest-growing market.

“People here seem to embrace a new style. When we first started doing what we are doing, we were really the only people that were combining sportswear with tailoring. For some reason, Asian consumers seemed to be drawn to that first,” Dainty said.

Cottrell and Dainty want more exposure for Cottweiler through the Seoul show, but that’s not all. They hope that the label will be able to more effectively communicate its message with the local customers.

“The main aim we have here is to be able to give a personality of what we do to the people that follow us. I think that connection to the consumers is what drives people to be really excited to see (other) people wearing our clothes,” Dainty said.