“The police will make all-out efforts to thoroughly investigate speculation that high-ranking police officers were involved,” Min said in a press conference.

“The messages suggest high-ranking police officers were covering their backs. We have begun an internal investigation,” he added.

The concerning KakaoTalk messages were exchanged around July 2016.

Meanwhile, local news outlet YTN reported that FT Island’s leader and guitarist Choi Jong-hoon had asked the police in 2016 to prevent media coverage of drunken driving on his part.

The police refused to clarify who in the chat room had brought up the commissioner general.

With the public’s attention zeroing in on Seungri and his close celebrity friend Jung for alleged sex bribery and sharing of secretly filmed sex videos, the two singers have been summoned for police interrogation, the police said. 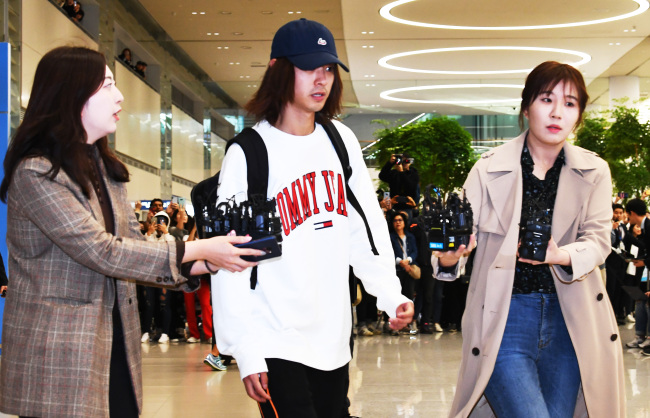 K-pop singer Jung Joon-young hastily flew in on Tuesday evening from the US shooting a reality TV show following revelations of his secretly filmed sex videos of women and sharing them in a chat room involving Seungri, FT Island Choi Jong-hoon among others. (Yonhap)
The two, each charged with different violations, will be questioned Thursday: Seungri about allegations that he brokered prostitution and Jung about allegations that he secretly filmed and distributed sex videos.

Police last month questioned Seungri as a witness, but this is the first time he is being questioned as a suspect.

The latest revelation that Jung secretly filmed sex videos of women and shared them in a chat room involving Seungri, Jung and FT Island’s Choi alongside fellow celebrities and acquaintances sent out shock waves.

Choi’s agency, FNC entertainment, admitted that Choi was questioned as a witness in the case earlier this week.

Known as a close group of celebrity friends, the three had also opened a bar in Gangnam in 2017.

In a statement, 30-year-old Jung, who hastily flew in from the US on Tuesday evening after shooting a reality TV show, admitted to filming and sharing sex clips and apologized for the wrongdoing.

According to the police, the problematic videos were taped between 2015 and 2016 without the approval of at least 10 women with whom Jung had sex.

In the wake of the scandal, Seungri and Jung’s agencies said Wednesday that they had ended their contracts with the artists.

“A slew of allegations and controversies have surfaced since the police report of physical violence at the club affiliated with Seungri. We are deeply sorry for the trouble caused,” YG Entertainment said.

Seungri, 29, announced his retirement from the entertainment biz earlier this week.

The troubled singer is accused of brokering sexual services for potential investors at Club Arena in Seoul in 2015 while preparing to open his nightclub, Burning Sun.

The allegations initially surfaced following alleged drug use and distribution and rape at Burning Sun on top of alleged collusive ties with the police.