[ The Korea Herald – Send E-mail ]
[Weekender] Coworking biz ushers in golden age
By Park Ga-young
Published : Mar 7, 2019 - 17:57
Updated : Apr 22, 2020 - 15:46
The concept of the “sharing economy” has caught on in Korea, but not as much as the enthusiasts had imagined. Uber, the most controversial example, was unable to enter for legal reasons, and others such as Airbnb-like house-sharing services are still fumbling to overcome regulatory hurdles.

In a way, coworking spaces are the lone shining star in the sector, with experts predicting the trend to continue for years. 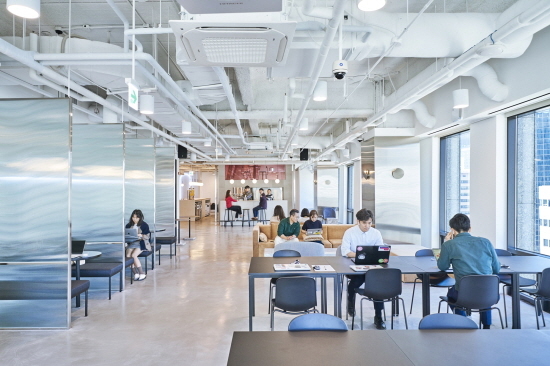 Another reason is quite simple: because coworking spaces face no opposition.

“There are no existing interest groups that oppose their growth,” Ryu pointed out. “Unlike car-sharing or house-sharing businesses which face fierce opposition from the taxi industry and hotel industry, respectively, no one oppose coworking spaces.”

The coworking space business, estimated to be worth 60 billion won ($53.15 million) as of 2017, is projected to grow by a whopping 63 percent annually over the next five years to be worth 770 billion won, according to a report by KT Economic and Management Research Institute last month.

The concept of shared offices first began to pick up pace in 2016, when office spaces used for coworking more than doubled from the previous year and saw explosive growth in the past two years.

According to a report by Koramco Reits Management and Trust, as of end-August 2018, there were 57 coworking space firms operating in 192 locations, adding 39 firms and 99 locations from mid-2017.

The skyrocketing number shows that many are jumping into the industry. The evidence can be seen all along Teheran-ro, the four-kilometer road that runs through Seoul’s affluent Gangnam-gu from east to west. It now hosts 30 office-sharing places ranging from ones opened by building owners to those launched by conglomerates like Lotte Group.

“The working culture among millennials started to change with the emergence of smartphones,” Kim Dae-il, co-CEO of Fast Five, South Korea’s largest coworking company, told The Korea Herald. “Coworking spaces satisfy their need to work flexibly and in style, resulting in explosive growth.”

He expects the coworking trend to continue as the business is attracting not only young startups or freelancers but also existing companies that are looking for new spaces and momentum.

That’s why Donghwa Pharm, South Korea’s oldest pharmaceutical company with a history of 117 years, is moving into one of Fast Five’s branches next month.

In fact, for WeWork, the world’s largest coworking space firm, more than 30 percent of its 400,000 members are existing businesses. For Fast Five, which is about to exceed the 10,000-member milestone soon, 40 percent of its members have more than 50 employees.