[ The Korea Herald – Send E-mail ]
[Weekender] Coworking space on the offensive
By Kim Young-won
Published : Mar 7, 2019 - 17:46
Updated : Mar 12, 2019 - 18:38
Upon entering the 30th floor of the 123-story Lotte Tower, the tallest building in Korea, visitors encounter a spacious and sleek office with people working on laptops on sofas, at desks or in glass-walled private rooms.

Boasting a stunning panoramic view of Seoul, the venue has an atmosphere that is both relaxing and business-like -- unlike traditional offices.

It is called Workflex, a premium coworking space launched in February by construction firm Lotte E&C with the aim of providing a snug nest for entrepreneurs and startups who want both security and class.

“The company, a relative newcomer in the coworking segment, will try to fill 60 percent of the entire 565 seats available at Workflex this year,” said an official from Lotte E&C, adding that 30 more Workflex locales will open by 2020. 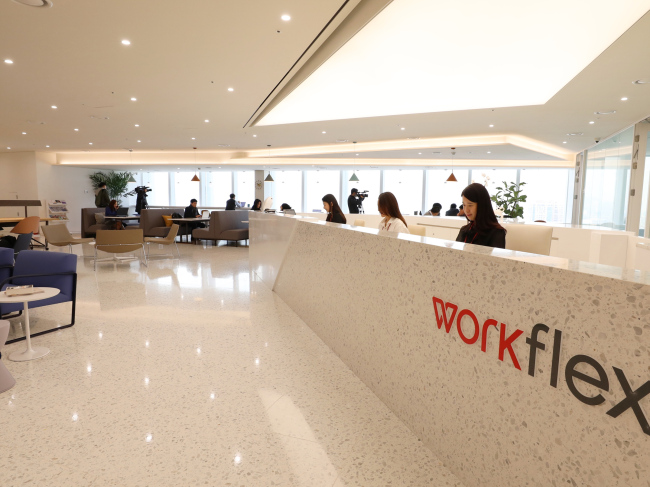 
Faced with increasing competition, existing players are rolling out new services in a bid to create new revenue sources and attract customers.

Co-living is one of the highly sought-after areas. Both global coworking space giant WeWork and its local rival Fast Five are aiming to expand their presence in the coliving business segment. WeWork operates the co-living service WeLive in New York and Washington. Residents of WeLive apartments can use communal facilities, like kitchens, media rooms and terraces, and take part in a range of activities, including happy hours and fitness classes.

WeWork is also trying to go beyond its existing businesses by tapping into new areas. It now runs elementary schools, where students take unconventional classes, such as meditation, farming and entrepreneurship, and the gym Rise by We, aimed at promoting wellness.

Not to be outshined, Fast Five is poised to launch a co-living place service, dubbed Life, next month. The first Life location in Seonjeongreung, southern Seoul, features 130 studio rooms, a fitness center and a common lounge. Fast Five is placing high hopes on the co-living business, which could be its next cash cow.

“I don’t think Life will be a one-off business, it could become larger than the current coworking business,” Park Ji-woon, co-CEO of Fast Five, said during a press conference last September. 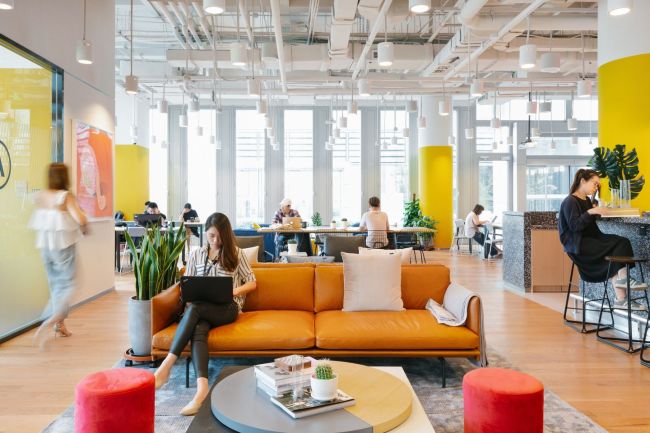 Entrepreneurs and members of startups work at one of WeWork`s offices. (WeWork)

Teaming up with realtors

“By working together with WeWork, the Park One complex, which will be a new landmark of the city, will help solve the vacancy issue and be able to offer innovative services for businesses in the financial and cultural sectors,” said Nam Hyo-joon of Kyobo Realco, a real estate consulting firm.

Park One, consisting of two skyscrapers under consultation in Yeouido, a financial hub in Seoul, houses hotels, shopping malls and offices.

The domestic coworking office market, valued at 60 billion won ($53 million) in 2017, is forecast to grow 63 percent per year to 770 billion won in 2022, according to think thank KT Economic and Management Research Institute

Some critics, however, said that coworking space firms will soon face headwinds, as the sector is becoming crowded -- and there are already warning signs.

“Those coworking giants, like WeWork, keep expanding their locations though their existing offices are suffering from high vacancy rates,” said an industry source. “To reduce the vacancy, they are seeking to sign long-term contracts with large corporates instead of individuals or startups that are relatively unstable financially.”