Some of them are destinations, others fall on the way to their final destination. Nonetheless, they are some of the busiest spots in the city, always packed with people.

Exactly 100 years ago on this day, these streets were also busy. On March 1 1919, the places mentioned above were swarming with crowds. Though the people were in different situations and lived different lives, they were all shouting out one single wish -- independence of Korea.

The nationwide March 1 Independence Movement started on the streets of Seoul. Today, the historic sites of the event are part of Seoul’s everyday scenery.

Commemorating the 100th anniversary of the movement, The Korea Herald traces the footsteps of the national uprising, introducing the related sites. 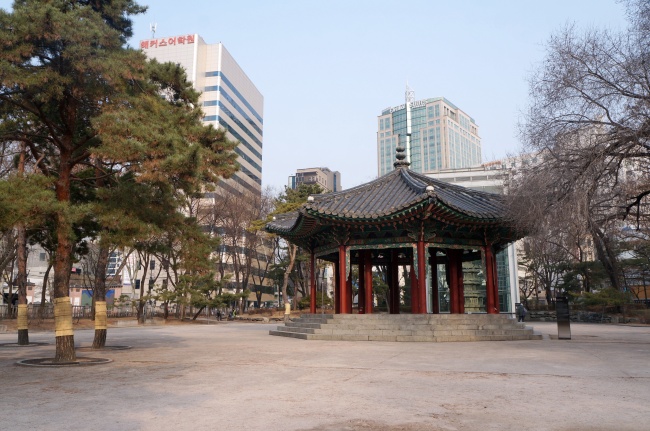 On the historic day, 33 opinion leaders were to read out the Declaration of Independence at the park. However, they did not show up (holding a smaller ceremony at another place).

Instead a student-independent activist took the stage at the park and read out the declaration, encouraging people to shout “manse,” shouting the wish for South Korea’s independence from Japanese occupation.

Crowds echoed him, shouting in unison. They waved the Korean national flag and started marching to the city center.

An archway of signboards at the park tell the story of the March 1 Movement. 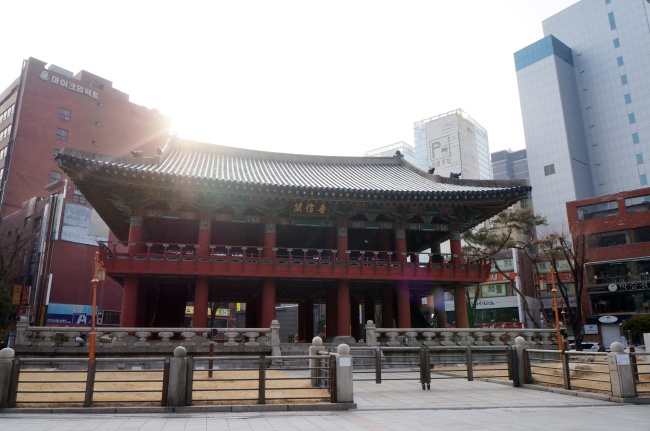 Bosingak Belfry (Im Eun-byel/The Korea Herald)
These days, Bosingak Belfry gets prominenceonly on the last day of the year when we welcome the New Year by ringing the bell. Except for Dec. 31 or major national events, it stands alone amid the concrete jungle of tall commercial buildings.

On March 1 1919, however, it was where protestors charged up their energy as they cried for Korea’s independence. After gathering at Tapgol Park, they headed to Bosingak Belfry, just a few minutes’ walk away, and rang the bell, protesting against the Japanese occupation. On March 5, when other protests took place, participants read out speeches calling for independence at the site. 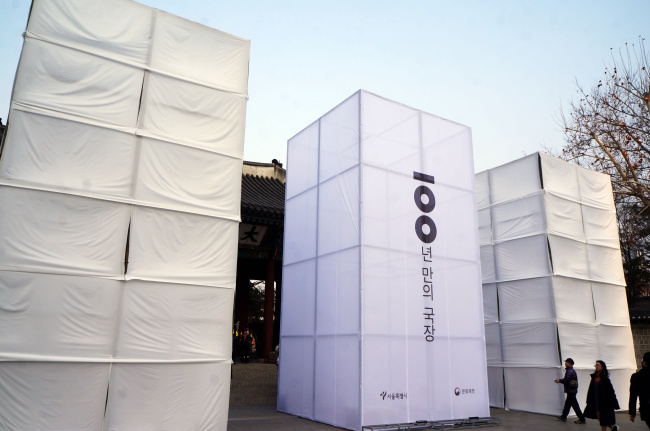 After the rally at Bosingak Belfry, the protestors marched up to Deoksugung, flooding the streets of Gwanghwamun. They were joined by crowds who were mourning the death of the king, before the official funeral on March 3. It was rumored that he had been poisoned by Japanese officials.

Some of the protestors even managed to get past the Japanese police and entered Deoksugung to pay their respects to the late king.

Now white clothes cover the outer walls of the palace, symbolizing how people dressed in funereal white gathered for the king’s funeral.

Seoul Station (Park Hyun-koo/The Korea Herald)
From Deoksugung, the protestors spread out in other directions, joined by more people. While Seoul Station may be one of the many protest sites, it holds a special meaning as the base from which news of the march was spread throughout the country.

Merchants, students and visitors who were in Seoul went back to their hometowns via the station, with copies of the Declaration of Independence. They encouraged their fellow citizens to take part in the movement, leading to a nationwide demonstration.

On March 5, another large-sized rally took place in front of Seoul Station. The location was chosen to allow protestors to flee to other cities to spread the news.