North Korean leader Kim Jong-un and South Korean President Moon Jae-in shake hands in front of Min Joun-ki’s landscape painting “Mount Bukhan” in the Peach House at Panmunjom during the inter-Korean summit in April 2018. (Joint Press Corps)
Born in 1949, Min gained recognition here in the early 1980s with what the artist refers to as his “barbershop paintings” -- named for their unsophisticated and kitschy appearance. In 1987, after moving from Seoul to Yangpyeong in Gyeonggi Province, he began to paint landscapes centered on mountains.

In “Roving Mongyudowon” (2016), Min offers a view of Buam-dong in Seoul at the bottom of the painting, with a mountain in the backdrop. In this instance, Min renders the town in a realistic way while depicting the mountains in the backdrop in a dreamlike manner, based on a motif in painter An Gyeon’s “Dream Journey to the Peach Blossom Land” (1447). 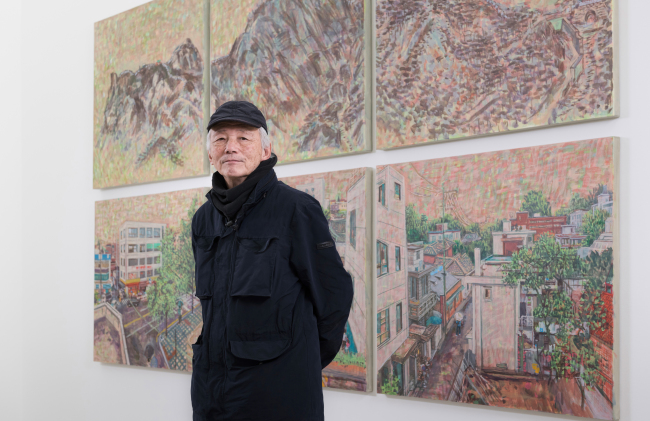 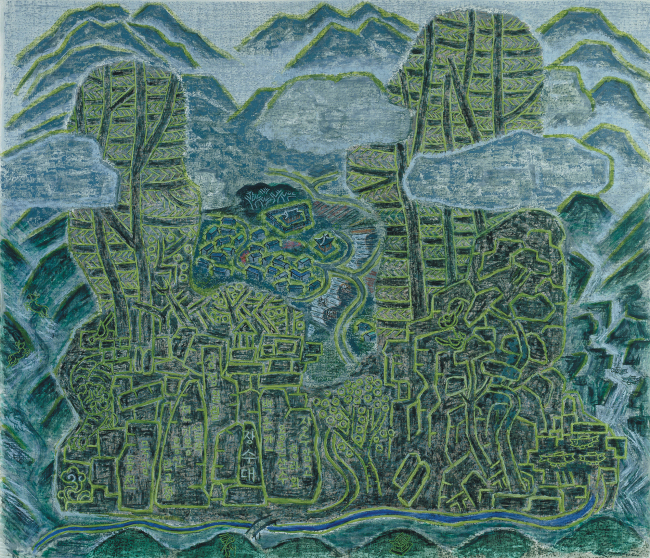 In addition to his paintings of mountains, the solo exhibition showcases a group of works in which he has recomposed buildings and historic sites around Seoul. The locations addressed in the new works include sites such as Jongno-gu’s Cheonggye Stream, Sajikdan, Segeomjeong and Baeksasil Valley.

Min’s works are heavily based on his field trips and research. He makes visible a location’s history by collaging scenes and objects found on-site with historical elements.

In “Cheongpung Valley 1-2” (2019), Min has painted a contemporary view of a town nearby Inwangsan. However, near the cluster of residential units is an ostentatious French-style building that no longer exists after a fire in the 1970s. Min’s inclusion of the 2,000-square-meter compound built by Yoon Deok-young, a bureaucrat of the Great Korean Empire, reveals the history of the area.

“Park Taewon’s Scenes from Cheonggye Stream” (2019) is another painting series by Min that aims to underscore major transformations that have taken place around the Cheonggye Stream area in Seoul. The works are based on a novel of the same name by Park Tae-won in the 1930s.

The exhibition at Kukje Gallery consists of 14 new works and 14 earlier works by Min. It runs through March 3.