South Korea’s rapid economic development centered on Seoul has made the country’s capital one of the most populous cities in the world, with skyrocketing housing prices.

Over-the-top housing prices have become a major social problem here, amid widespread public outcry for the government to tackle the issue.

Among various types of housing in the nation, apartments are the most dominant and symbolic of the middle-class.

The number of apartment homes came to 10.3 million, accounting for 60.6 percent of houses, according to data from Statistics Korea.

“I was on board an airplane for a business trip. I looked down at the city and felt extremely frustrated and despondent. Seoul is a concrete jungle packed with office buildings and apartments, but I can’t seem to find a decent one-room apartment within budget,” said Michael Yoo, 34, who works at a large conglomerate.

He added, “I make about 3.8 million won ($3,400) a month, which is well above average. I am not in debt, yet according to my calculation, it would take me over 10 years to purchase an apartment with two rooms on the outskirts of Seoul.”

Apartment prices in the city are reaching new highs, driven by real estate speculation and people who choose to move to Seoul for education and work.

The price to income ratio released by NH Investment & Securities showed that as of 2018, Seoul residents would have to save up their disposable income for 21.1 years to buy a house in Seoul compared to 20.6 years in London, 13.1 years in Tokyo and 11.3 years in New York. 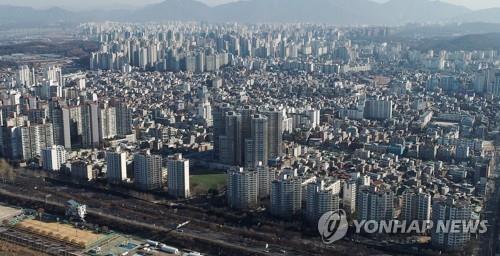 “Seoul’s PIR is similar to levels back in 2009, after the global financial crisis, when the figure reached its peak. Housing prices are overvalued compared to rent and the rise in income,” said Kim Hyung-keun, an analyst of NH Investment & Securities.

In the same period, the average price of an apartment in Seoul rose more than 100 million won to 716.6 million won from 670.8 million won, it added.

While apartment prices soared in double digits, the monthly income of an average three-person household rose 1.5 percent on-year to some 5 million won in 2017 from 4.9 million won.

Kim predicted Korea’s real estate market would slow down this year, largely due to stricter restrictions for loans, higher tax, an increase in interest rate, and a greater number of new homes.

Hoping for better days ahead, Yoo said, “I understand the government is trying to tackle housing prices in Seoul. But this time I hope it’ll be done properly for people earning average income to be able to live in an average house.”