“The decision to reinstate the workers was made to deal with the production of the long-body version of Rexton Sport and succeeding model of Korando C named C300 alongside reduced work hours,” the company said in a statement.

In late September, four parties involved -- SsangYong Motor, SsangYong Motor’s labor union, Korean Metal Workers’ Union, and the Economic, Social and Labor Council -- reached a consensus to bring back 60 percent of dismissed workers by the end of 2018, and the remaining workers during the first half of 2019. 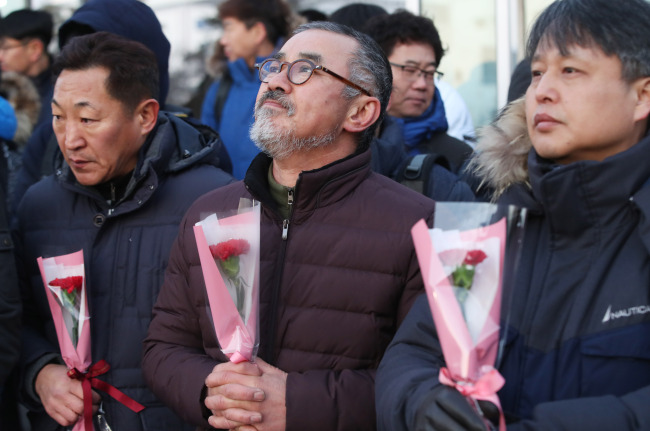 SsangYong Motor workers hold carnations at an event arranged to mark their reinstatement at the carmaker’s factory in Pyeongtaek, Gyeonggi Province, Monday. (Yonhap)
With the latest reinstatement, SsangYong Motor has put an end to its longstanding issue surrounding the assembly workers who left the company after the firm was placed under court receivership in 2009, before Mahindra took over the company.

At the time, 900 workers who had joined a strike were given options to either go on unpaid leave or take voluntary redundancy. Those who refused both options were permanently laid off.

After years of disputes, which spread into a political debate, the 454 workers who had chosen unpaid leave returned to work as of 2013. The company and the union then agreed to a gradual reinstatement of the workers in 2015 and most recently agreed on the final schedule for the remaining 119 workers who lost their jobs.

SsangYong Motor has said it has recorded increasing sales at home largely due to smooth wage negotiations for the past nine years in a row.

The carmaker stands at No. 3 among local carmakers in terms of number of vehicles sold here. It sold 98,484 units here between January and November 2018, up 2.6 percent on-year, data from Korea Automobile Manufacturers Association showed.