The paradigm shift that Duchamp introduced to the art world with his “readymade” objects -- that an everyday object with little or no modification could become a work of art through the creative process by the artist and spectator -- was a concept that shattered the modern conception of art as the production of artistic “genius.”

Considering the impact made by Duchamp across Asia, the ongoing retrospective exhibition of the artist here is perhaps long overdue. 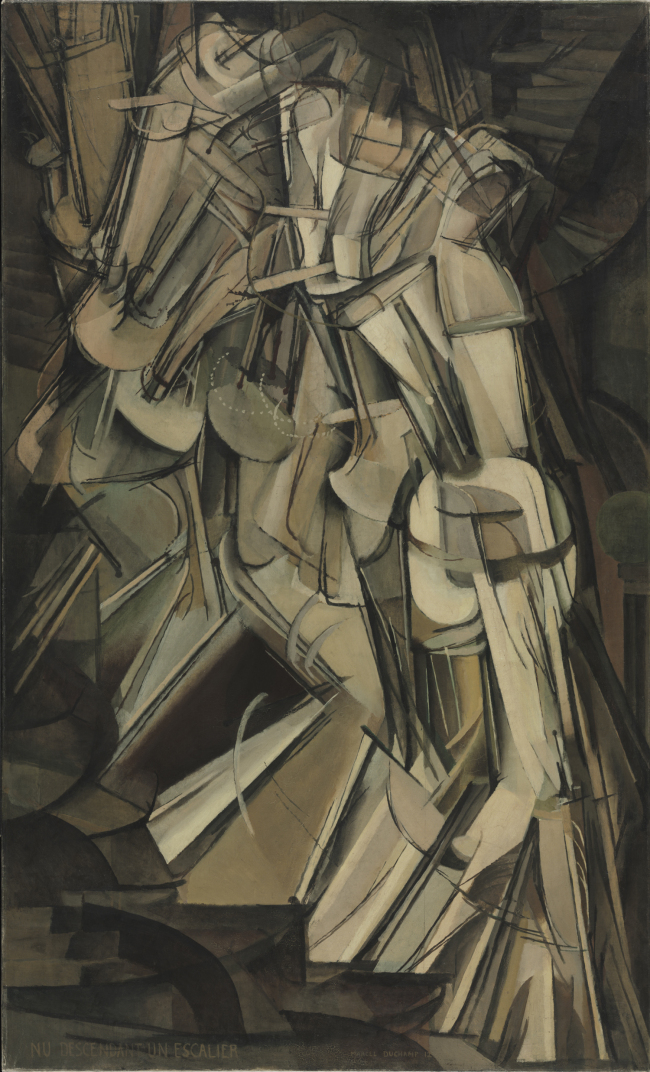 Marcel Duchamp’s 1912 painting “Nude Descending a Staircase (No. 2)“ (Association Marcel Duchamp)
The National Museum of Modern and Contemporary Art’s Seoul branch is holding “The Essential Duchamp,” with some 150 pieces by or related to Duchamp, on loan from the Philadelphia Museum of Art, the holder of the largest collection of Duchamp’s works.

The exhibition highlights Duchamp’s oeuvre, ranging from his early experiments with painting styles -- like Fauvism and Cubism -- to the making of “Etant Donnes,” the last project that Duchamp secretly worked on from 1946-1966 in his Greenwich Village studio.

Also on display are Duchamp’s famous readymade objects -- ordinary manufactured items designated by the artist as works of art. The readymade pieces at the MMCA’s show include a 1964 replica of “Bicycle Wheel” and 1961 replica of the artist’s first readymade object, “Bottlerack” in 1914, and, of course, “Fountain.” 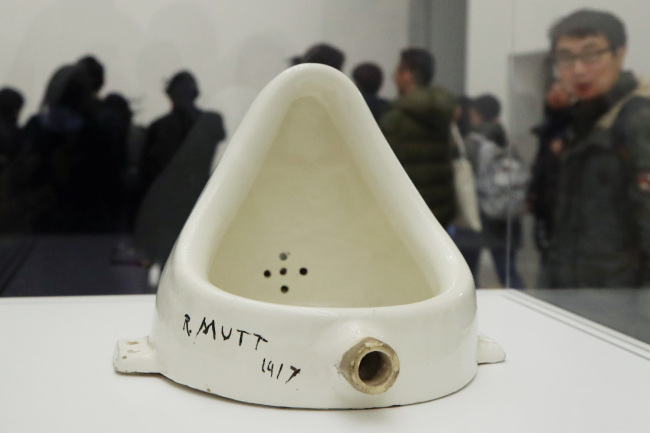 The 1950 replica of Marcel Duchamp’s original “Fountain” in 1917 is part of his retrospective exhibition at the National Museum of Modern and Contemporary Art‘s Seoul branch. (Yonhap)
The “Fountain” piece displayed at the latest exhibition is a 1950 replica of the original piece made in 1917, which was submitted to the first exhibition of the Society of Independent Artists in the United States.

The submission of the porcelain urinal under the pseudonym R. Mutt was intended by Duchamp -- a co-founder of the association -- to test his fellow artists and organizers at the Society of Independent Artists, who touted themselves as being open to accept virtually every artwork submitted without judgment by a jury member.

After discussion and a vote, the directors, however, decided to exclude the submission from the society’s inaugural exhibition that was scheduled to open in April 1917. Duchamp resigned in protest.

The original 1917 piece was discarded or lost, and all that remains is a photograph by Alfred Stieglitz.

The piece at the MMCA’s exhibition is one of the replicas commissioned by Duchamp in the 1950s and 1960s, the period when Duchamp’s public profile expanded enormously.

There was great demand for exhibitions about and by him, said Matthew Affron, the Muriel and Philip Berman curator of modern art of the Philadelphia Museum of Art, during a press conference Thursday at the MMCA. Authorizing the creation of the replicas was part of his response to the demands of the public, he added.

“Duchamp was happy to sign many replicas because the more he signed, the more the objects will be devalued.”

A paradox that one can fairly argue is that Duchamp’s urinal nonetheless has become more valuable regardless of the artist’s attempt to debase the value of a work and dismantle its inherent authenticity and authority.

The “Fountain” piece is now enshrined as a sacred object, and the iconoclast could not help but surrender himself to becoming an icon of art in the 20th century.

Duchamp himself understood his position in the art scene in his later years, according to curator Affron. Duchamp anticipated his legacy would be revisited by the public later on, he added.

“It was important for him that his works be shown at one place. He wanted to be present and accessible to the public,” curator Affron said.

Between 1940 and 1950, the museum was bestowed a vast amount of works and archive materials related to Duchamp by five major private collectors -- Walter and Louise Arensberg, Christian Brinton, A. E. Gallatin and Alfred Stieglitz.

The Arensbergs’ collection -- the most distinguished among all the collections -- was bequeathed to the museum in 1950, largely at Duchamp’s suggestion. In a letter to the Arensbergs, who were close friends, Duchamp wrote that the museum had “the air of permanency,” curator Affron said. 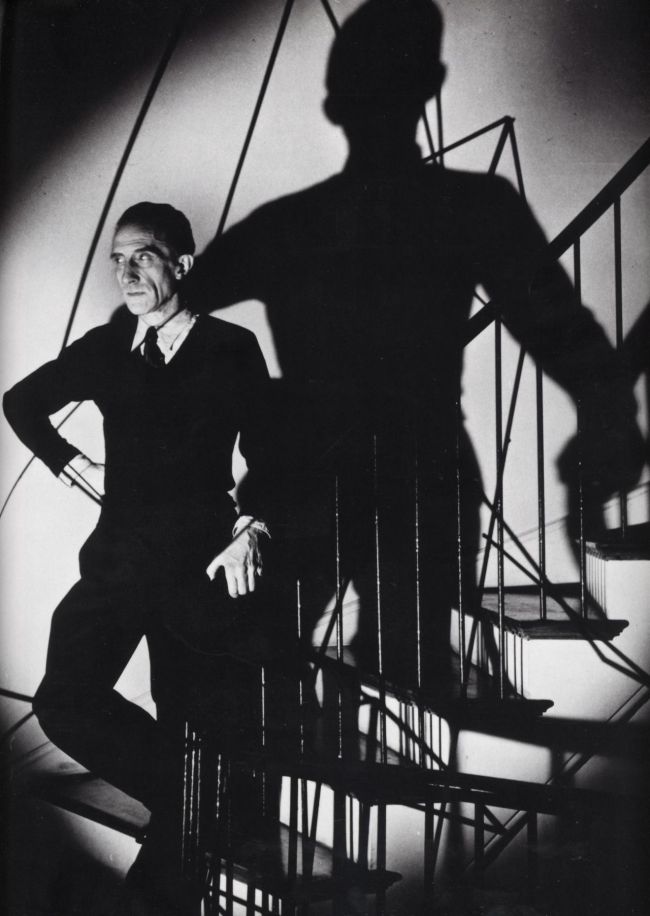 ”Duchamp Descending a Staircase“ (1946) by George Karger (Association Marcel Duchamp)
The idea of putting his works on permanent display may actually seem quite anti-Duchampian. But Duchamp understood the Arensbergs’ concerns regarding the preservation of works, according to the curator.

The latest retrospective exhibition here is meaningful, as it offers the public opportunities to experience perhaps the most important art figure in modern and contemporary art.

“You could miss very important part of his works if you don’t look at the works firsthand because he was interested in not just concept but also the materials,” Affron added.

The exhibition is being held at the MMCA until April 7. 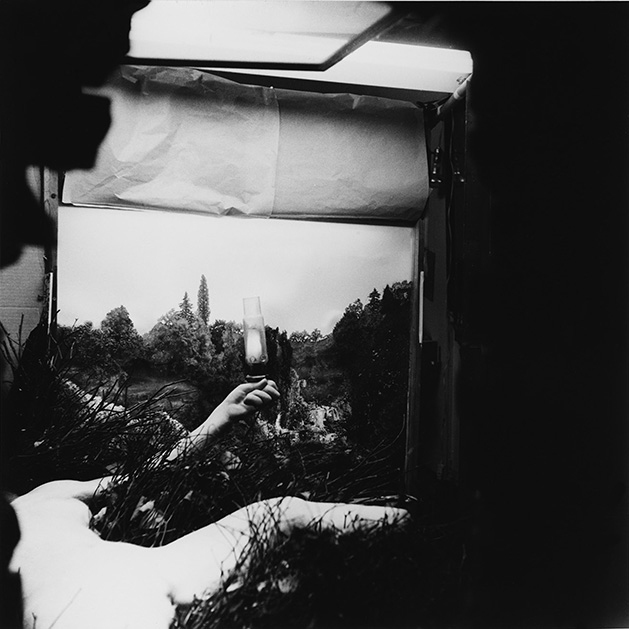