[ The Korea Herald – Send E-mail ]
Remembering titan of compassionate conservatism, passionate progress
“Stretching my neck out the prison window and gazing at the flock of seagulls flying southward, I realized that the preciousness of freedom was seeping into my brain cells.”
By Joel Lee
Published : Dec 20, 2018 - 17:08
Updated : Dec 21, 2018 - 16:09 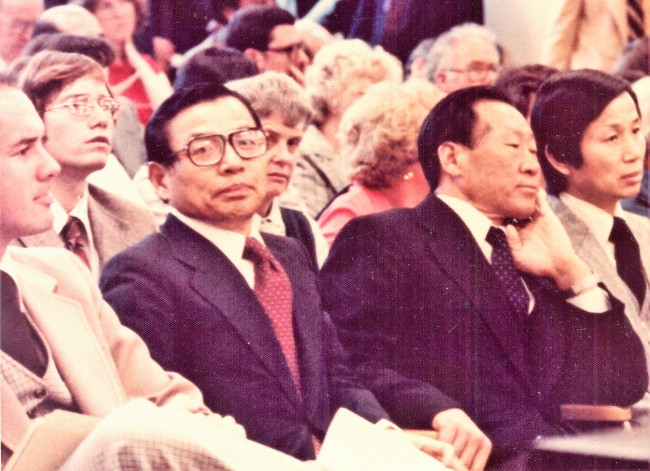 Late South Korean economic policymaker Kim Ip-sam (left) sits next to the late Hyundai Group founder Chung Ju-yung at an international conference in the late 1970s, when they worked as the vice chairman and chairman, respectively, of the Federation of Korean Industries. (Kim So-im)
Many South Koreans take the nation’s prosperity for granted nowadays, but it wasn’t always the case.

Unlike countries blessed with abundant natural resources, Korea’s freedom and wealth were forged by the blood and sweat of its people from the 1950-53 Korean War and the economic takeoff that followed, known as the “Miracle on the Han River.”

To be precise, it wasn’t a miracle either. It was the outcome of science that combined the popular desire for betterment, zealous patriotism and the spirit of prosper-thy-neighbor.

From the ashes of the war, step by step and brick by brick, South Korea rose incrementally. The growth-obsessed authoritarian government managed the economy with a series of five-year development plans, and the embryonic chaebol toed the state line with strategic investments in preordained sectors, industriously pursuing a path of export-led expansion and entering global value chains. The period of “developmental dictatorship” from the early 1960s through the late ’70s and onward, ironically, and fortuitously, was of “inclusive growth”: an epoch of a nation in the making during which its building blocks -- bureaucracy, the corporate sector, education, public health and the military -- were conceived, created and patronized. 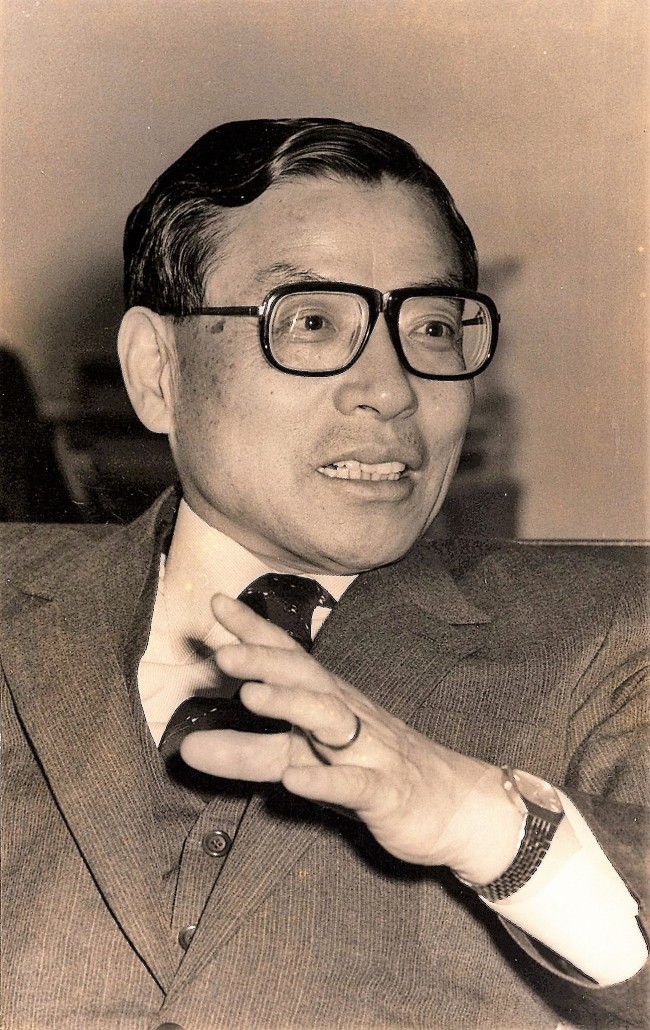 The late Kim Ip-sam (Kim So-im)
The late Kim Ip-sam was one of the principal architects of the modern, democratic market economy of the Republic of Korea. A government official and vice chairman of the Federation of Korean Industries, Kim’s illustrious career as an economist, bureaucrat and policymaker coincides with the country’s miraculous postwar trajectory, a course he passionately and compassionately shaped.

Now, a year after his death on Dec. 7 last year, a book has been published tracing his life and achievements. “Kim Ip-sam, Cornerstone of South Korea’s Economic Development: Why He’s Missed Dearly” is written by 30 opinion leaders comprising his family and colleagues, from business and academia to media and politics.

For those curious about the secret to South Korea’s rapid development as well as the vicissitudes of its fortunes and falls, the book is a paean to a now bygone era, which emerging and third-world nations worldwide strive to emulate in the 21st century. 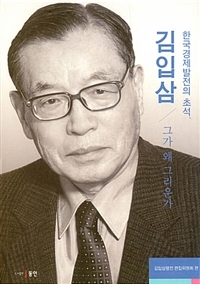 “Kim Ip-sam, Cornerstone of South Korea’s Economic Development: Why He’s Missed Dearly”; Dongin, 375 pages, 26,000 won
“The Republic of Korea that was born in 1948 had to chart its own untrodden path of liberal democracy and a free market economy. Behind leaders like Syngman Rhee and Park Chung-hee, there was sagacious strategist Kim Ip-sam,” said Son Byeong-doo, chairman of the Ho-Am Foundation and former vice chairman of the Federation of Korean Industries, at a commemorative ceremony for Kim’s passing and the book’s publication at Lotte Hotel in Seoul on Dec. 13.

“The late Kim, faithfully applying the principles of the free market economy, persuaded the government to take the right course, tirelessly taught public servants and students, established laws and policies and appealed to people’s patriotism. Like the famous economist Alfred Marshall said, he was a man of ‘cool head and warm heart,’” added Son.

Kim was born in 1922 in a small backwater town of Jongseong in North Korea’s North Hamkyeong Province, bordering China along the Tumen River. An inquisitive boy with an unusual passion for learning, Kim was the best of the best and brightest through elementary, middle and high schools, but couldn’t enter university due to his family’s indigent circumstances. In the thick of life-or-death ideological purges that pitted communists against capitalists after national liberation at the end of World War II, Kim was jailed, interrogated and surveilled by the communist police for opposing the Soviet trusteeship of North Korea.

“Stretching my neck out the prison window and gazing at the flock of seagulls flying southward, I realized that the preciousness of freedom was seeping into my brain cells,” he recalled.

The late Kim Ip-sam in his senior years (Kim So-im)
Everything changed when the Korean War broke out in 1950, a “fateful turning point” in Kim’s life as he describes it. Kim headed to the South nestled between the United Nations Forces troops.

In South Korea, Kim, who spoke a bit of self-taught English, befriended a US sergeant named Donald Christie, while working at the United Nations Command’s department of information education. Christie, a University of Minnesota graduate, using personal connections, encouraged and supported Kim to study at his alma mater, an offer the Korean gladly accepted.

He returned to Korea in 1959. Working closely with leaders like President Park Chung-hee, Kim formed the cadre of talented technocrats now credited with designing and propelling the country’s “compressed” material takeoff.

A commemorative ceremony for Kim’s passing and the book’s publication at Lotte Hotel in Seoul on Dec. 13 (Joel Lee/The Korea Herald)
Kim’s achievements include establishing the nation’s medical insurance system, devising five-year economic development plans as well as laying the foundation of export industrial zones across South Korea and attracting foreign capital and investments. He also played a key role in institutionalizing the Capital Market Promotion Act, direct and indirect financing systems and the basis of labor-management relations.

In the early 1970s, he foresaw the rise of computerization in the corporate world, and made great efforts to incorporate advanced electronic technologies in business practices.

As the cauldron of South Korea’s economic fire cools, and younger generations increasingly conservatize their mores, Kim’s life serves as a wake-up call for a nation in a midlife crisis. Above all, his life’s creed -- as a compassionate conservative -- may be exactly what South Korea needs in a globalized world, from which it can neither withdraw, nor engage without the love of humanity. 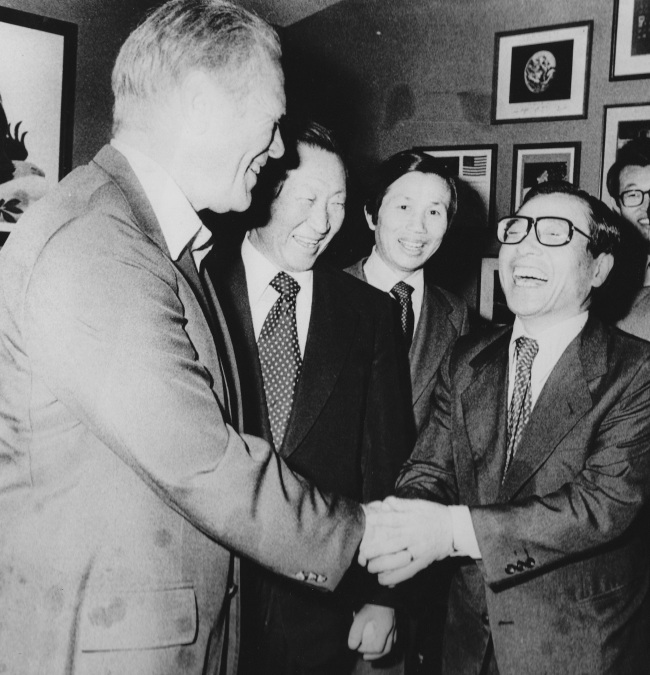 Late South Korean economic policymaker Kim Ip-sam (right) shakes hands with former US President Gerald Ford during a presidential visit to Seoul in November, 1974. Beside Kim and next to Ford is the late Hyundai Group founder Chung Ju-yung. Both worked as the vice chairman and chairman, respectively, of the Federation of Korean Industries. (Kim So-im)