The National Weather Agency issued this year’s first “extreme cold” warning in the second weekend of December, when the lows fell below minus 10 degrees Celsius in Seoul for two consecutive days.

As winter approaches its peak, subzero temperatures persist day after day. The weather agency says the coldest month of the year in Korea is January, when the temperature lows average minus 6. The cold wave sweeping the Peninsula is especially harsh on those on low incomes, who struggle to afford heating at home.

The weather agency’s head of climate policy Lee Eun-jung told The Korea Herald that the weather in the country was “recently showing an increasingly polarized trend -- extreme heat in summer and extreme cold in winter.”

The agency’s data from 1988 to 2017 show that the past decade saw more official cold alerts than in previous years. Colder winters are taking their toll on society, from the bottom rung of the social ladder. 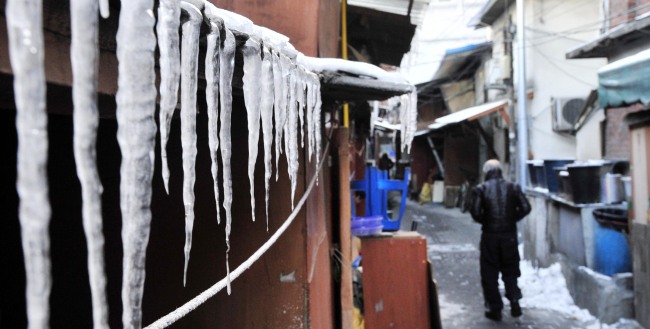 Icicles drop from the roof of a single-story house in Seoul (The Korea Herald / Park Hyun-koo)
Warmth is costly in winter. The government defines energy poverty as households whose energy consumption expenditure makes up or exceeds 10 percent of total income. The concept of “the energy poor” first came into spotlight in 2005, after the tragedy of a young teenage girl in the city of Gwangju, Gyeonggi province, made headlines across the country. The 15-year-old lost her life to a fire caused by candles, a month after her family’s electricity was cut off because it couldn’t pay its energy bills.

Fast forward to 2018. While the Environment Ministry says it aims to eradicate energy poverty by 2030 on its website, Seoul Metropolitan Government says about 10.3 percent of the city’s population is still energy impoverished, most of whom barely make the minimum cost of living.

On Aug. 1, Lawmaker Cho Kyung-tae of the main opposition Liberty Korea Party proposed a revised bill to repeal the country’s electricity rates system, arguing that the current scheme is outdated because it was designed for a time when the electricity supply was unstable.

Cho criticized the system’s unequal pricing mechanism distribution, pointing out that the state-run Korea Electric Power Corp. “only applies progressive billing on households, whose usage accounts for only 13.6 percent of total power consumption” while “industrial usage, which makes up 56.6 percent of the total, is not subject to progressive pricing.”

The progressive power rates, first implemented in 1974, mean the unit cost of power gets more expensive the more you use. Businesses were exempted in order to fuel development.

The Energy Ministry and Kepco held their first task force meeting to modify the current progressive pricing scheme for residential power Tuesday. The task force will put forth a final proposal by first half of next year through a public opinion survey and consultation with the National Assembly. 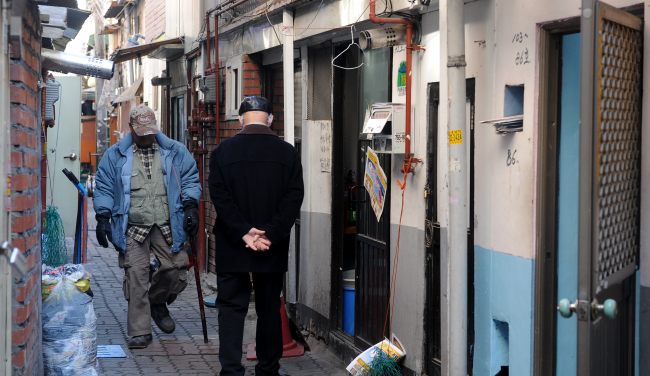 A man layers up against the cold in a Seoul neighborhood (The Korea Herald / Park Hyun-koo)
Being poorly housed is another factor that makes winter less bearable. According to the Land Ministry’s October report, over 190,000 households in Seoul and Gyeonggi Province live in “non-residential housing,” which refers to living quarters that do not meet the legal requirements of a proper residence. Of “non-residential housing” residents, over 40 percent live in low-cost single room occupancies known as “gosiwon.”

The safety of gosiwon came under public scrutiny after a fire in one located in Jongno-gu, Seoul, left seven dead and 11 injured in November. A month later, on Dec. 4, the national human rights commission held an open forum to discuss inadequate housing that does not meet residential requirements and announced the results of the commission’s survey, which found that 24.1 percent of such facilities were not equipped with heating, and 57.5 percent were unable to maintain moderate indoor temperatures during winter.

Many of society’s poorest also work outdoors, where they are exposed to the cold without suitable safety measures. The Labor Ministry has set up guidelines for extreme climate conditions such as during fine dust and heat wave alerts, but it hasn’t yet established one for extreme cold. A representative at the Labor Ministry said that the “implementation of protection measures for workers in accordance with the climactic changes is a fairly new topic of discussion” and that it is only in “the initial phase of social debate.”

Asked if there would be future measures for outdoor work during the winter season, the ministry representative told The Korea Herald he was unable to confirm it.

Whether the government-issued guidelines are followed through in practice is another question. Outdoor workers say that the safety measures are seldom observed.

“There is no incentive for employers to ensure breaks from work during hazardous weather conditions, as less work translates to less profit,” said a parking attendant whose cubicle office sits by the roadside. Although she is a full-time employee at a city-run parking lot, she told The Korea Herald on the condition of anonymity that Labor Ministry instructions were hardly followed. “After all, they are merely guidelines.”

Seoul Metropolitan Government’s environment policy department is organizing a campaign to support the low-income citizens eligible for basic livelihood grants. The campaign, launched in November 2016, accepts citizen and corporate contributions, through which 20,000 vulnerable households would be supplied with over 400 million won worth of heating appliances and other products this winter.

The board of Korea’s human rights policy institute Moon Kyung-ran said that to find “a fundamental, long-term, and proactive solution,” the problem must be approached from a human rights perspective.

Climate change is turning the cold into a class issue.