[ The Korea Herald – Send E-mail ]
Rookie designers aim to be Korea’s next fashion giants
Reaching next stage of careers, Dew E Dew E and By.D’By discuss growth, challenges and future
By Im Eun-byel
Published : Nov 15, 2018 - 17:33
Updated : Nov 15, 2018 - 21:48
The runway is always admired by emerging designers who want to be the next Karl Lagerfeld, Alessandro Michele or Christopher Bailey. But not all labels make their way into the spotlight.

Though Seoul is not one of the “big four” fashion capitals of the world, it has no lack of young brave hearts who hope to make it big.

At the 2019 spring-summer Hera Seoul Fashion Week in October, two designer brands, Dew E Dew E and By.D’By, took a big leap at the Seoul Collection, the larger of the two shows that make up Seoul Fashion Week.

Previously, the two brands showed at Seoul Fashion Week through Generation Next -- shows for rookie designers, with the support of the Seoul Design Foundation. But they graduated to the larger stage last month, standing on their own.

Though these labels still have a long way to go to reach the global fashion scene -- perhaps Paris, Milan, London or New York -- they have embarked on their journey. No one knows how long the journey will take, but one thing is for sure: The designers know the way.

Dew E Dew E is all about being lovely, but it also knows how to be chic. 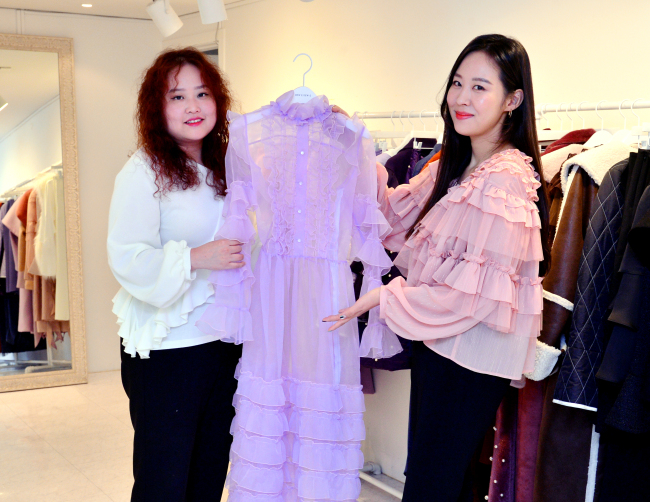 The brand is led by designers Lee Su-yeon and Kim Jin-young, who both attended Hongik University, a prestigious arts school here. They started the brand in 2014.

The beginning was not grand -- they even thought about starting the business at Lee’s small studio. But now, they have a showroom at Sinsa-dong, one of the trendiest fashion spots in Seoul. 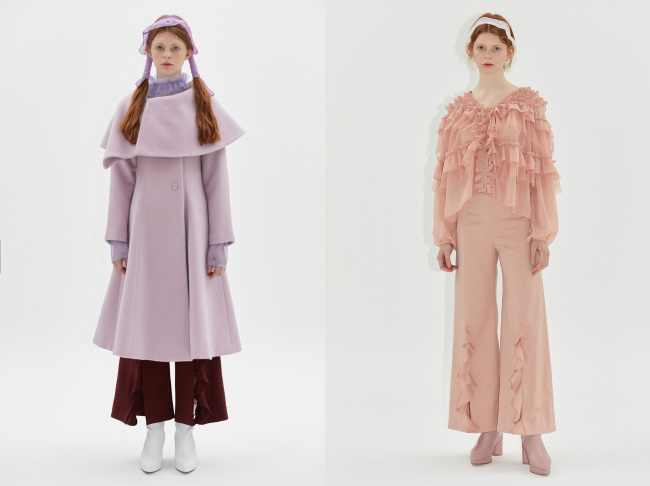 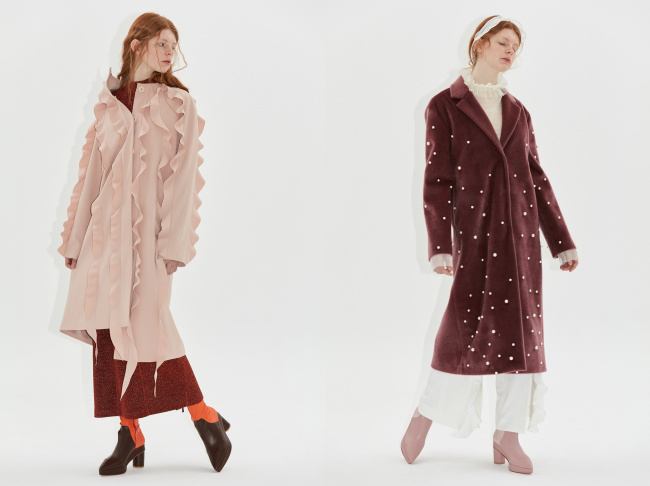 Creations by Dew E Dew E
The designers made it to the Seoul Collection last month, after being a part of the Generation Next runway for the past three seasons. But they say they still have a long way to go.

“The course (from Generation Next to the Seoul Collection) is considered to be the standard path,” Lee said. “Many celebrated designer brands here have gone through the process, such as YCH, Kye and more. It feels great to think that we are following their steps.”

“But in some ways, the real challenge begins now as there is not a definite answer to what we should do,” Kim added.

“The increased number of pieces was overwhelming, but actually, the Seoul Collection has much less restrictions compared to Generation Next, as we are not funded by others,” Kim said.

The designers considered Seoul Fashion Week to be an opportunity to show their brand identity to the larger public.

During London Fashion Week in September, where they had a booth, they were grateful to the Korea Creative Content Agency for giving them a chance to meet with international buyers in a showroom event.

“We were able to meet with international buyers and the press at the showroom. It was the first time for us to participate in such an event. It is just a start. But through the opportunity, we hope to work our way into the overseas market,” Kim said.

The designers aim to create the most attractive pieces for women in their 20s and 30s, based on “romantic chic sensibility.”

But Dew E Dew E does not only target young women. The brand is also keen on launching capsule collections, introducing looks for couples or for mothers and daughters. This season, the designers took on a new challenge, launching a menswear line.

“Though we design clothes for men, too, it is not as if we have started something completely different from what we have been doing. The menswear line is a part of our Dew E Dew E identity,” Lee said.

It also recently started another line, Dew E Heart Dew E, for its original fans. The second line aims to stay close to the basics of Dew E Dew E.

“As we have become a brand that stages shows, our creations are becoming more elaborate and artistic. We thought it would be nice if we could show consumers who have liked us from our early days that we remember them,” Lee said.

For designer Song Bu-young of BY.D’BY, Busan is more than just a southern port city where he lives.

Though Song has been making a name for himself at Seoul Fashion Week, he is still based in Busan, a city where he finds inspiration, feels connected and finds support. 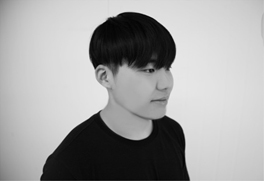 BY.D’BY head designer Song Bu-young (Courtesy of the designer)
BY.D’BY -- which focuses on avant-garde street looks (meaning a mix of avant-garde and minimalism) based on layering -- debuted at the Seoul Collection in October. BY.D’BY, like Dew E Dew E, showed at Generation Next for three seasons.

“Generation Next was easier to prepare for because we had a certain guideline to work with. For the Seoul Collection, designers have to take care of everything,” Song told The Korea Herald in a recent email interview. “The fashion show really becomes a stage to show the label.”

Even while part of Generation Next, Seoul Fashion Week proved to be a chance for the brand, founded in 2015, to make its way into the overseas market.

As the brand is growing in size, Song now has more responsibilities. He has to take on more roles than being just a designer. He is the head designer, the CEO, and also the creative director of BY.D’BY.

“Starting with the latest collection, I am working with a team to manage the brand,” Song said. “Before, I was a solo designer, just focusing on how to show the brand’s color. But now I have to think about the business aspects, especially as fashion shows require money.” 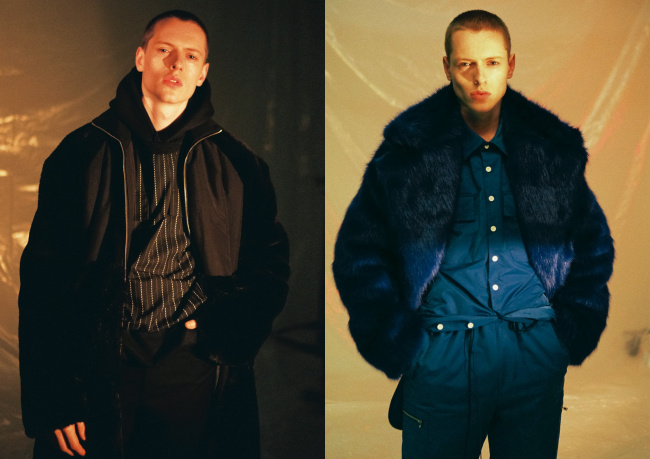 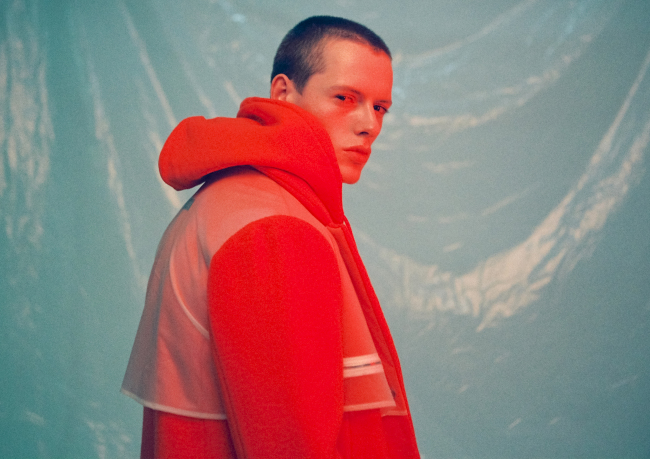 As the second-largest city in Korea, Busan also has its say in fashion. It hosts the biannual Busan Fashion Week, and Busan was famous in the 1980s as a hub of the textile industry and shoe manufacturing.

It is Song’s choice to stay in Busan, aiming to revive the city’s fashion business, but challenges remain.

“The fabric market here is one-tenth that of Seoul. I am able to do everything (related to running a fashion brand) here, but I make purchases from fabric markets in Seoul. Most designers here do the same,” he said.

“Shoe design is hard to start, as it requires high initial cost. I am thankful to the center for supporting me,” he said.