South Korea said Wednesday that it has raised its budget for the basic science sector to 1.69 trillion won ($1.49 billion) next year as it vowed to focus on researcher-oriented research and development.

The figures represented a 16.2 percent hike from the 1.45 trillion won allocated this year, according to the Ministry of Science and ICT. South Korea's basic science sector accounted for 11.4 percent of the ministry's total budget next year. 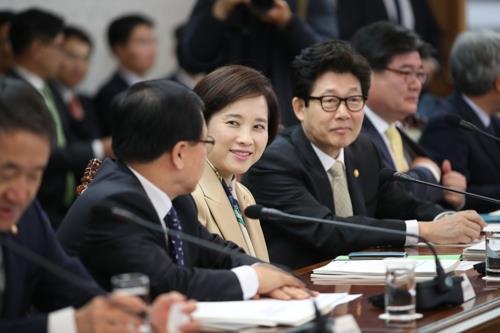 Ministers talk during a meeting on Nov. 14, 2018, to discuss issues in the science and technology sector.(Yonhap)
The budget is subject to parliamentary approval.

The move came as Prime Minister Lee Nak-yon presided over a ministerial meeting to discuss the government's policy and deregulation in the science and technology sector.

The government said it will assist up-and-coming researchers who possess good potential to make scientific breakthroughs, stressing the need to tolerate failures.

In 2022, 35 percent of the government budget in the ICT sector will be allocated for projects dealing with difficult scientific subjects.

The money could help researchers focus on their work without worrying about funding issues by expanding R&D projects to more challenging areas.

The ministers also discussed ways to innovate an independent R&D support system that will revolve around talents with potential in the future.

The government said it will also expand R&D projects to help dementia patients in line with the government's long-term plan, announced earlier, to expand treatment of the illness through a state program. (Yonhap)