The Air Force said Monday an A330 MRTT arrived at an air base in the southern city of Gimhae, South Gyeongsang Province. The tanker plane is expected to become operational next month after undergoing a series of performance tests.

The military expects that the tanker will boost South Korea’s air combat capability in the event of territorial disputes with neighboring countries. The South’s fighter jets had been restricted from being dispatched to remote areas due to a lack of refueling assets.

“Through the adoption of air refueling tanks, we can add more sorties to the fighters when they engage in missions in Dokdo and Ieodo,” said an Air force official, requesting anonymity due to military regulations. 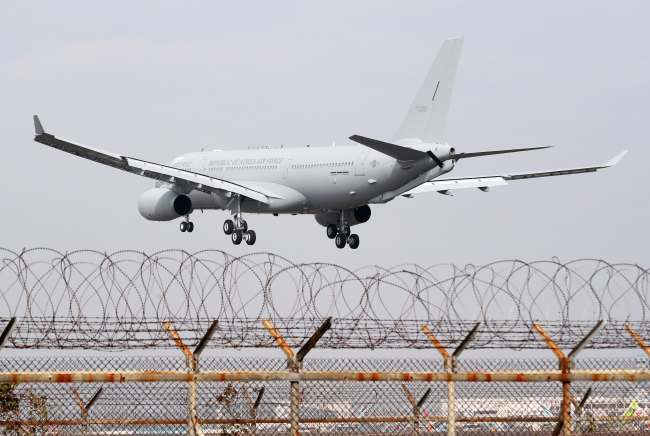 Air refueling tanker A330 MRTT arrived at an air base in the southern city of Gimhae, South Gyeongsang Province, Monday. Yonhap

Dokdo and Ieodo are a set of South Korean-controlled islets. Japan has long asserted its claim on Dokdo, while China has recently intensified its claims over waters where Ieodo is located.

According to the Air Force, F-15 fighter jets are only able to operate over the disputed regions for up to 30 minutes. If the fighters can be refueled on their way to the islets, the operational length can be expanded up to 90 minutes.

The Air Force plans to introduce three additional A330 MRTTs tankers next year. Manufactured by Airbus Defence and Space, the tanker is 59 meters in length, with a wingspan of 60 meters, and is capable of carrying up to 108 tons of fuel.