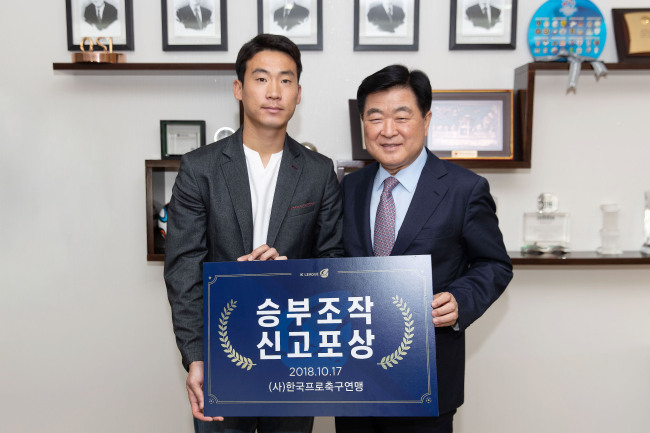 (Yonhap)
Lee rejected a match-fixing offer from former player Jang Hack-yong on Sept. 21. Jang then tried to lure Lee to receive a red card during a match against Busan IPark in exchange for 50 million won, but the Asan defender refused to accept his proposal and immediately reported it to the police. Jang is currently in police custody.

The K League said Lee showed a good example of correctly dealing with match-fixing proposals under its manual and brought awareness to misconduct in the sport.

Under the league code, those who report wrongdoings and illegal actions related with the league operations can get a cash reward between 10 million won and 100 million won.

"I've been fully taking the league's and my club's education programs on preventing misconduct," Lee said. "Any K League players would have done same. I'm sure that the K League, a stage for me, my teammates and football fans, will not be tainted by illegal actions."

The K League was hit by a massive match-fixing scandal in 2011.

Since then, the league has been operating various programs to prevent match fixing. (Yonhap)