An estimated 18.1 million new cancer cases were predicted worldwide for 2018 -- with 9.6 million deaths, said a report of the International Agency for Research on Cancer.

This is up from estimated 14.1 million new cancer cases and 8.2 million deaths reported in the agency's last assessment just six years ago. 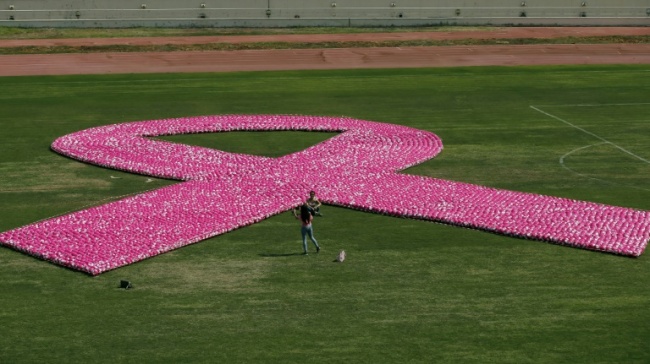 The global burden of cancer continues to grow in spite of scientific advances. (AFP)
An increased focus on prevention -- encouraging people to get exercise, quit smoking, and eating a healthy diet -- led to a drop in certain types of cancer in some population groups, the IARC said.

Yet the overall number of new cases is racing ahead of efforts to contain the disease.

"These new figures highlight that much remains to be done to address the alarming rise in the cancer burden globally and that prevention has a key role to play," said IARC director Christopher Wild.

One in five men and one in six women will develop cancer during their lifetime, the study said, and the World Health Organization expects the disease to be the leading cause of death in the 21st century.

There are dozens of types of cancer, and the agency found large differences between countries due to a host of socioeconomic factors.

Asia, unsurprisingly given its enormous population, accounted for nearly half of all new cases and more than half of cancer deaths worldwide in 2018.

Lung cancer remains the biggest killer overall, responsible for some 1.8 million deaths -- nearly a quarter of the global toll. 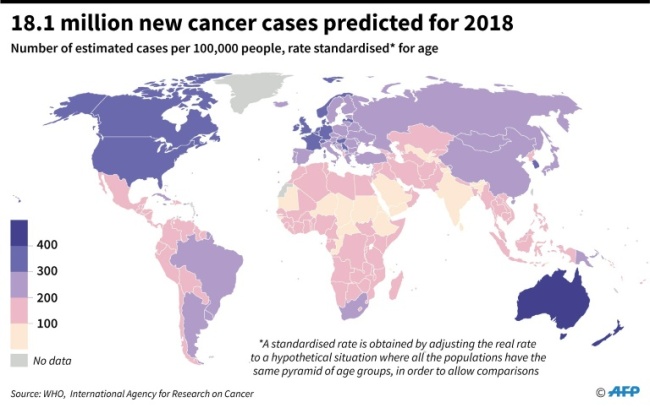 Estimates per country for the number of new cancer cases in 2018 per 100,000 people, according to the World Health Organisation. (AFP)
The figures highlighted a worrying rise in lung cancer rates for women -- it is now the leading cause of female cancer deaths in 28 countries including Denmark, the Netherlands, China, and New Zealand.

"One of the things that happens with transitions towards high levels of socio-economic development is the environment changes," Freddie Bray, IARC's head of cancer surveillance, told AFP.

"There is more physical inactivity and that happens to be a particularly high risk factor for colon cancer, for example."

Bray said models using current cancer statistics and predicted trends forecast as many as 29 million new cases a year by 2040.

"The extent to which this is becoming a major public health problem and the diversity of cancers that we see in different regions is also a striking point," Bray said.

Anti-cancer measures could take the form of stricter tabacco controls to limit lung cancer, or initiatives to encourage physical activity to reduce the risk of colon cancer.

But the study warned that global efforts to rein in one of mankind's biggest killers still "lacked momentum".

"Either from a social or an economic point of view the numbers are increasing," said Bray.