The first rally, held May 19, drew some 12,000 women demanding stronger punishment for men who produce sexually explicit videos of women by using hidden cameras, as well as for those who share them online. 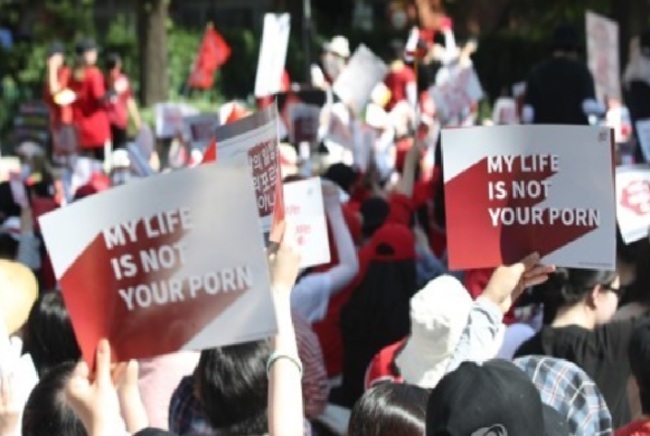 The upcoming rally will also protest the recent court decision to acquit a powerful politician of sexual assault, and will accuse the judiciary of complicity in what the organizers view as the gender-based violence that has prevailed in the country for too long.

An Hee-jung, the former South Chungcheong Province governor and a onetime presidential contender, was found not guilty of sexual assault through abuse of authority last month. The judges said there wasn’t sufficient evidence that An had abused his professional authority to pressure the victim, an ex-aide of his, into having sex with him. There were also “inconsistences” in the victim’s testimony, they ruled.

Many women’s rights activists have protested the court’s decision, saying An was acquitted because the victim did not “behave like a victim” by society’s biased standards -- that is, she did not quit her job but continued to fulfill her professional duties after the incident.

The organizers of the rallies have also criticized the police for showing an indifferent attitude toward female victims of sexual violence. Earlier this year, a female model was taken into custody after secretly taking a photo of her colleague while he was posing nude for a group of university students and then sharing it on a community website without his consent.

The authorities’ “prompt” response to the case -- the female suspect was arrested 12 days after the photograph was shared online -- triggered a hail of criticism, with many women pointing out that it took the Korean government more than 10 years to shut down SoraNet, a popular adult file-sharing site where male users shared illicitly filmed footage of women.