The revised guidelines, which come three years after the first set of guidelines was introduced in 2014, provide a detailed process for dealing with school violence, to allow victims to receive proper assistance from school violence centers across the country. 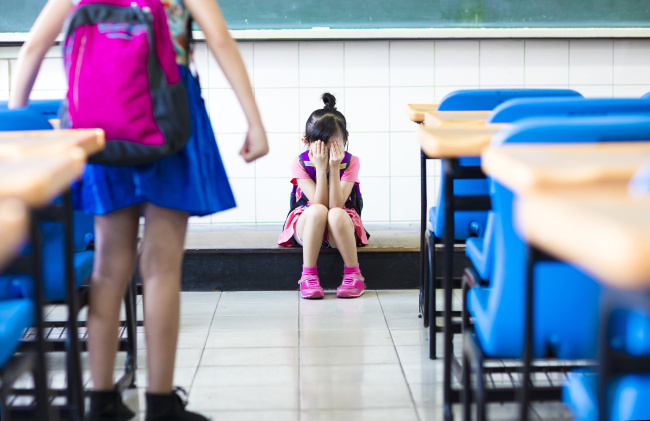 (Yonhap)
Victims of school violence were previously not notified when abusers filed for a retrial, therefore they often missed the opportunity to testify in their cases. The new guidelines mandate that a school violence committee should inform the victims in such circumstances.

The guidelines also include a new system that allows the quick transfer of information on the abuser between the school and police.

Once a case occurs, the school is required to provide information about the abuser and the case to the police within 14 days. Police had previously often complained of a lack of information on the abuser.

“When a case of school violence arises, the school’s first action is the most important, and we hope the revised guidelines will be helpful for schools,” said Jeong In-soon, chief of the Student Support Bureau.

Monday’s guidelines were distributed to all schools and educational institutes across the nation, in the form of online files and booklets.

The number of counseling inquiries to Wee Centers across the nation concerning school violence appears to have increased, according to ministry data revealed by Rep. Kim Hae-young of the Democratic Party of Korea. Wee Centers, launched in 2008, are government-run counseling centers for students.

In 2017, more than 26,000 requests were submitted to the Wee Centers for counseling over school violence, while the total number of counseling sessions from 2014 to 2018 reached 98,996 for elementary, middle and high school students.